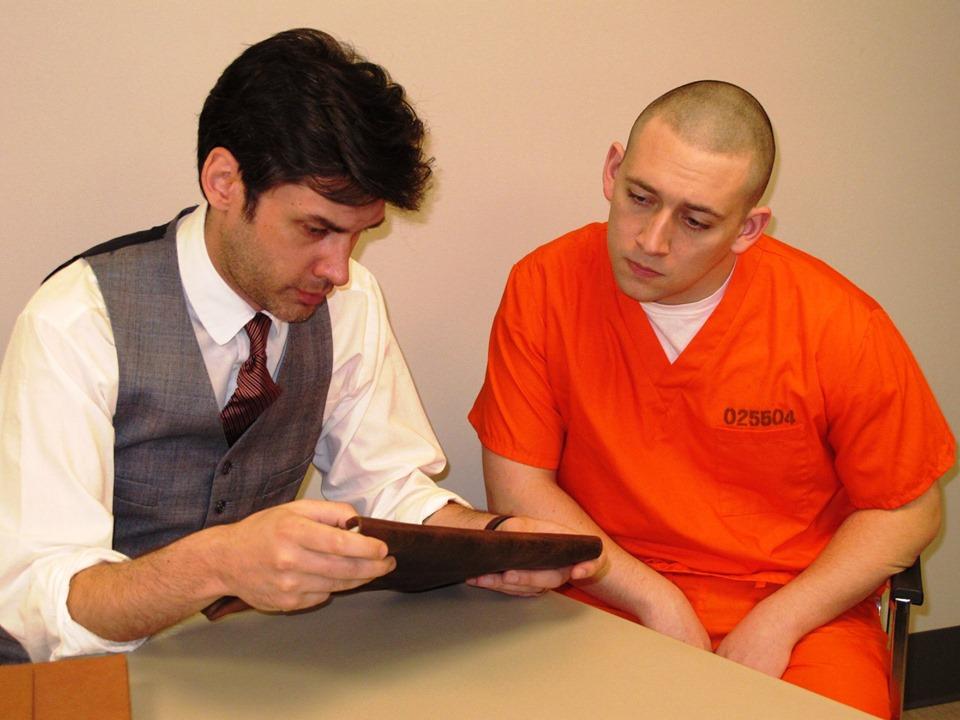 Cherry Docs is the title of David Gow's play of hate and redemption in the Rose Firebay of the Ivy Tech John Waldron Arts Center. I'm George Walker. Cherry Docs are red, steel toed, Doc Martin boots that Mike, the Nazi-skin-head used to kick an Asian to death. Danny, is Mike's dutifully liberal Jewish lawyer. The initially hard and later vulnerable Mike says, "In an ideal world I'd see you eliminated. In this one, I need you." The Jewish Theatre of Bloomington's Mike is played by first timer Christopher Crider-Plonka. Danny is JTB veteran Jonathan Golembiecki. IU, Stages Bloomington and JTB veteran Liam Castellan directs.

It's been more than twenty years since David Gow's Cherry Docs had its first production and he himself has said that he'd hoped that in those years the play's impact might have been blunted. Sadly that's not the case today.

The play is a single hour and forty minute production with relatively brief solo and joint scenes for the attorney and the client. The incarcerated Mike's lecture on the importance of feet and just how comfortable those Cherry Doc boots were holds a certain fascination. Later he gives a detailed description of just how one should go about improvising a prison tattoo. Lawyer Danny is free to come and go. His account of a frightening car experience boxed in by four African-American youths and his audio battles with his wife over Latin dance music are virtuoso pieces. Frankly the first hour's relatively short scenes seemed a bit fragmented and only loosely connected by the screen graphics describing the time line.

All through the play Mike seems to want Danny to come up with a quick fix, a strategy that will either free him or cut his jail time. He angrily tell the lawyer, "You're not supposed to make it hard." Danny refuses and keeps asking Mike to come to terms with the murder and the emotional underpinning that made it possible. At first Mike is able to only robotically repeat the creed of his organization.

Things come to a head in a tensely dramatic scene as Danny forces Mike to take on both the graphic description of the injuries to his victim and the victim's forgiving humanity.

As the drama moves from the tension to resolution there's a curious shift. Danny who at first seemed the stronger with his creed of liberal tolerance has triggered positive changes in Mike but they're not ones that he can follow and he's adrift. Danny's wife has left him and even to himself he's curiously disconnected from his career. Meanwhile the incarcerated Mike is making some real progress. He's working to finish high school, meeting with a therapist and developing his own potential and life with a core of love.

In his thoughtful notes, director Liam Castellan asks the audience if in these times a play like Cherry Docs can help and encourages us to find out together. The Jewish Theatre of Bloomington's production of David Gow's Cherry Docs plays through May 19th in the Rose Firebay of the Ivy Tech John Waldron Art Center.