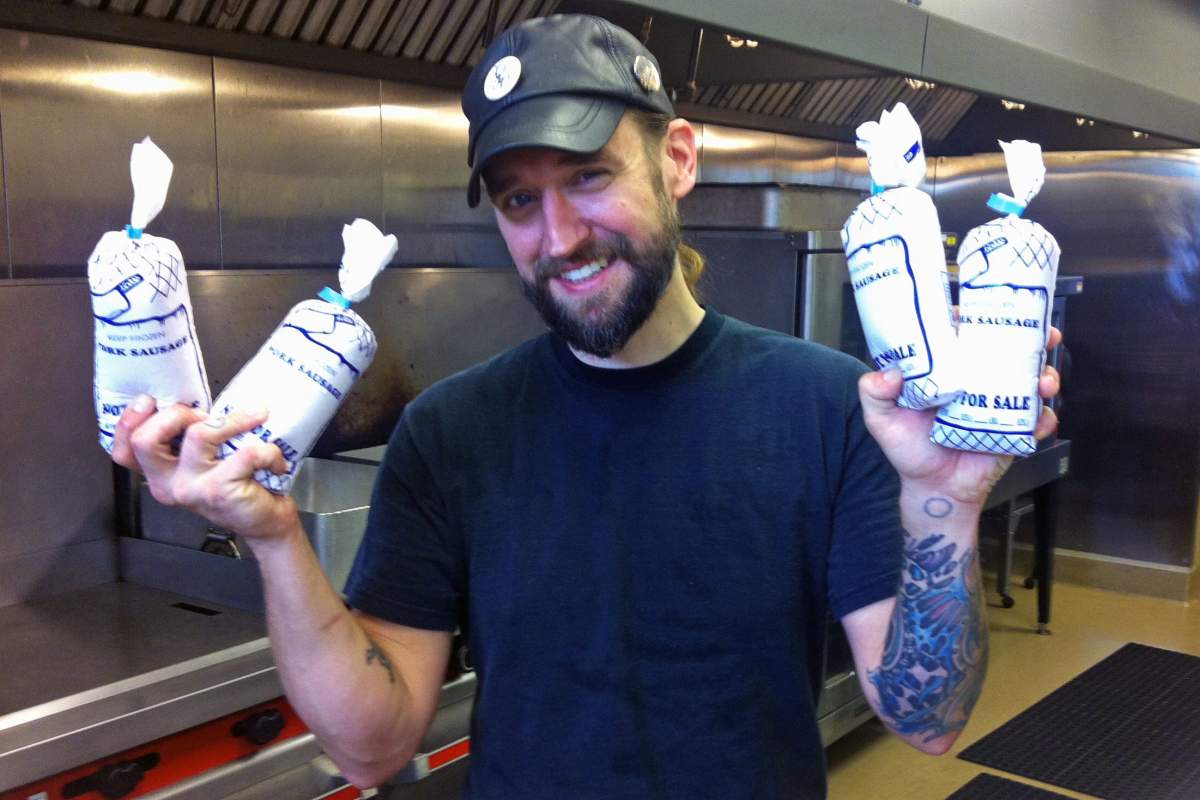 TheÂ Community Kitchen of Monroe CountyÂ presents its annualÂ Chef's ChallengeÂ this Sunday. The competition features three local chefs making food under some of the same restraints cooks at the kitchen face every day.

We visited the kitchen one day as the cooks were planning this evening's meal.

Like many hunger organizations, the Community Kitchen of Monroe County gets much of its food from the USDA commodity distribution program. They also receive on-the-edge perishable foods from grocery stores, as well as leftovers from cafeterias. Cooks at the kitchen are used to working with whatever they've got in stock. If there's a specific ingredient they really need, they'll write it on the office dry erase board. That's the wish list.

Polly Muckenfussbrown knocked a couple items off the wish list with her donation today. "I had a hard time buying peas because canned peas don't taste very good," she says.

But she bought them anyway, along with canned corn and some crackers for the kitchen's backpack buddies program. She spent $145 at Sam's Club, but this food won't last long. One #10 can equals about one-inch of the pans at the Community Kitchen.

"So this is just over one day's worth, just in corn," say Kitchen Supervisor Adam Sommer.

Food goes fast when you're cooking for 250-to-300 people every night. He puts the corn and peas aside. He's saving that for later.

Sommer has no formal culinary training; he's learned how to cook during his 12 years on the job. One skill he's mastered is adaptability.

It's 11:00am. He alternates sipping his coffee with rifling through box after box of packaged food. Planning tonight's dinner starts in the pantry.Â It's overloaded with elbow macaroni, but he cooked that earlier this week, so he's looking for something different.

"We had a fantastic donation of egg noodles recently. Let's see if there are any more of those leftover," he says.Â In his ideal world, he would have the time and resources to make egg noodles from scratch, but that's just not possible.

Once he collects enough bags of noodles, it's into the freezer. He pulls out some pork. In his ideal world, thisÂ isÂ the pork he would use. This summer, Community Kitchen received donations of animals shown at the county fair. The freezer is now packed with meat from three cows, three pigs and three goats.

"This is a pig that was nurtured and loved and it's going to make a beautiful dish today," he says.Â He sets a dozen packages of meat out to thaw. He also grabs a container of baby potatoes.

Then, his favorite part of the any dish - house-made chicken stock. "I like to call it liquid gold."

Sommer is formulating his recipe. "I'm kind of leaning toward doing my mom's Hungarian goulash recipe," he says.

The Problem With Spices

Here's where the trick of working in a community kitchen comes in - he discovers they're out of paprika.

Think about your own kitchen. You forget you're out of a spice until you go to use it. Unfortunately, Sommer can't just run to the store.

Take pepper, for instance. That's one of his go-to spices, along with salt, chili powder and cumin.

"Crazy to think about going and buying a big batch of pepper because I think it's like $40. And when we're trying to keep our budget down, spending $40 on pepper seems a little unnecessary," he says.

In a back room, Sommer is standing on his toes, peering into boxes of spices stashed on the top shelf. No paprika. But he does find a bottle of harissa, which is a pepper-based spice blend. This particular bottle lists paprika pretty high on the ingredients list, so that's what he'll use. He tells a coworker to add paprika to the wish list.

Back in the kitchen, the countdown begins: three hours until dinner service. He searched for some fresh tomatoes to add to his recipe, but they didn't have any in stock.Â So, his goulash will have to work with spaghetti sauce instead.

"It's gonna have to work. That's sort of the name of the game," says Sommer.