Charlotte's Webb and Some Pig !!!

Director Liam Castellan has assembled a wonderfully versatile cast. Wilbur, the runt pig in the hands of Caleb Curtis is a wonderfully sympathetic figure at the play’s center. Somehow I never forgot that he was playing a pig even when he spoke directly to us. Kate-Lynn Edwards was delightfully empathetic as Charlotte the spider. Edwards is a wonderful aerialist and each time she took to the silks to spell a new word she had some different tricks as she described the process poetically.

The Arable children, Fern who loves and saves Wilbur and Avery who tolerates him are double cast with talented Harper Davis and Kate Williamson as Fern and Darby Bowman and Sam Clarke as her older brother.

Tom Slater appears as the resolute father, John Arable, the reprehensible, but charming, Simon the rat and Luvy the gentle farm hand. Kenny Arnold II was a wonder as Homer Zuckerman who takes Wilbur in, as Uncle,  Wilbur’s massive blue ribbon winning competitor at the fair and as the bent over, wise old sheep.

I’ve mentioned Brynn Jones as the Goose and the Gander. She also appears as an enthusiastic county fair goer and the nervous presenter of Wilbur’s special prize.

Cardinal’s production of Charlotte’s Webb is upstairs at the Ivy Tech John Waldron Arts Center  where Jeremy Smith has created a lovely and functional  set with plenty of barn wood and hay bales for the farm yard and then with lights, banners and posters, a county fair feeling. Lighting Designer Bridget Williams makes the day and night work and with sound designer Marcy Kloville throws in a nice suggestion of the fireworks at the fair. My hat is off to Kayla Cieslinski for the costuming and also to puppetry consultant Emily McGee for help with the Goose and Gander. I’d love to get back stage to see how they got Brynn Jones in and out of that costume and I’m betting that there’s some Velcro involved.

So much for all the technical details that underpin this heartfelt story. When I was in seventh grade, our English teacher read the book to us. It was a riveting story with the saving of Wilbur, and even we boys were a little misty eyed over Charlotte’s brave acceptance of her own rhythm of life. That a few of her five hundred and fourteen children stayed softened the blow. And the story’s message that ‘it is not often that someone comes along who is a true friend and a good writer,’ helped a bit more.

At the theater for you, I’m George Walker. 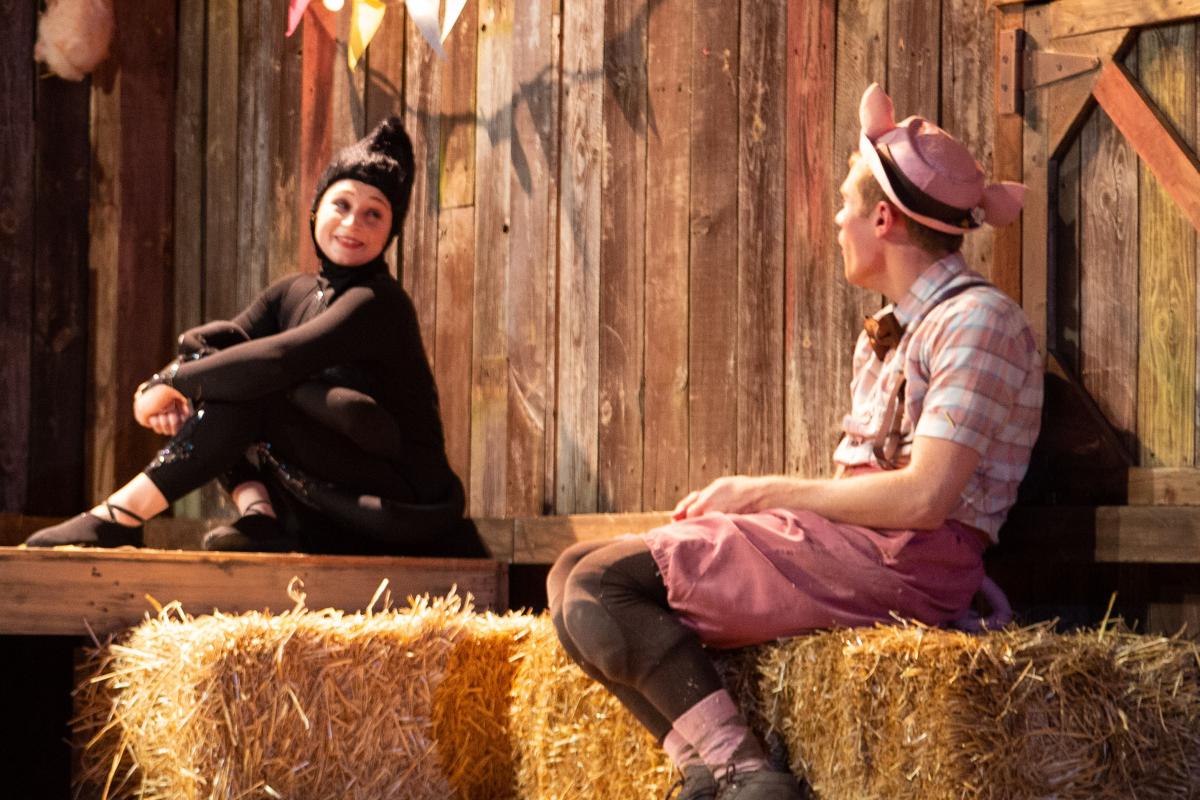 Kate-Lynn Edwards as the sympathetic Charlotte in a tender moment with Wilbur, Caleb Curtis. (Blue Line )