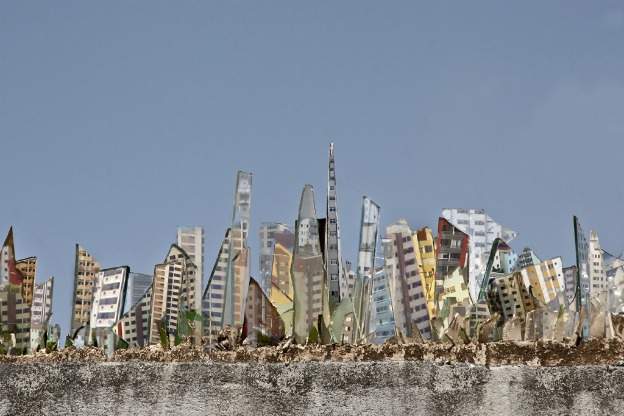 Every three years or so, we get the opportunity to see what the artists on the faculty of the Hope School of Fine Arts at Indiana University are doing, without having to go to New York or Chicago or Amsterdam.

After many years at the IU Art Museum, this year's faculty show is being presented at the newly dedicated Grunwald Gallery of Art (formerly the SoFA Gallery).Â Given that the work on view represents more than thirty faculty artists in ten studio areas, the show is eclectic to say the least.

You will see paintings and photographs and ceramics and other objects you recognize in this year's Faculty Show, but the piece that confronts you as you enter the Grunwald Gallery can't be categorized so neatly.

Chris Dacre's unorthodox piece is hard to ignore. As if a bright red, spandex-clad missile rolled up in a screenprint of playfully patterned aircraft weren't provocative enough, the sculpture incorporates an audio track on repeat play that offers some darkly ironic self-help.

Dacre is a visiting faculty member in printmaking whose connection to his work's martial iconography has a long history.Â "I was in the Air Force right out of high school," Dacre explains.Â "I did eight years."

One assignment during his service involved the very object he's reproduced here:

I guarded these in North Dakota.Â The US has 5,113 of these intercontinental ballistic missiles. Russia has around 11,000.Â All you need is for one of these missiles to be launched, and it's going to change everything-the way the rest of the world is-for the rest of time.

A delivery system for that stark message, albeit a whimsical one, Dacre's piece is more Bread and Puppet than Rembrandt.Â Although it incorporates screenprinting, traditional printmaking processes are nowhere in evidence.Â Dacre does work in intaglio and relief, but regularly rummages for alternative materials and techniques to see what might work.

Exhibiting a piece like this in the faculty show makes manifest the advice he's always giving his students-whom, he's hoping, will come see the show: "Don't just take printmaking," Dacre insists.Â "Take sculpture, take ceramics, and find your own voice with those."

Ed Bernstein, Co-Head of Printmaking, agrees that the show plays an important pedagogic role. "I'm asking students in my BFA seminar to interview the other artists in this exhibition to find out more about them as artists than as teachers. This is a research university.Â We're artists who teach, not teachers who do art."

The work the veteran faculty member is showing in the group show emerges from a semester he spent as a visiting scholar at the Federal University of Minas Gerais in Belo Horizonte, Brazil in the fall of 2010.Â Bernstein collaborated with his wife Wendy to produce an artist's book of highly manipulated digital photo prints registering their impressions of the city.

Although the book they created focused on the city's Walls, Gates, and Entrances-which is also its title-the work eludes such strict divisions between media. Â The work unites altered photographic prints, text, pastel, and watercolor within the medium of the artist's book.

When it comes to the taxonomy of the arts, Bernstein's photo remixes are as slippery as Chris Dacre's assemblage.Â But tackling a new medium, or juggling several at once, is nothing new for Bernstein, who's made everything from three-dimensional, three-foot tall Â fabric monsters, to series of etchings based on drawings of angels by Domenico Tiepolo. Bernstein explains,

I don't decide that I'm going to do this process and then make art about it. It's really dictated by the image.Â How do I make this?Â What's the best way of doing it?

Bernstein hopes that sharing the new with his students work might serve to illuminate the artist's desultory path.

In its political engagement and its heterogeneity, Bernstein's work relates to Dacre's.Â But Bernstein's social commentary also aligns his work with a couple of other pieces in the show that appear to represent a more formally cohesive body of work.Â Like Bernstein, Ruth N. Halls Professor of Photography Jeffrey Wolin has traveled extensively over the last couple of decades in the service of his art.

But the work he's engaged in now has brought him full circle, revisiting subjects he first approached during the Reagan administration. Between 1987 and 1991, Wolin photographed residents of the Crestmont community, Bloomington's housing projects.Â This was during the crack cocaine epidemic, and issues of drugs, crime, welfare, and subsidized housing were extremely topical.Â But Wolin's own biographyÂ provided additional motivation. "My father grew up in abject poverty in New York City," Wolin notes, "the child of immigrants."

With this sense of kinship, the photography professor insinuated himself into the lives of people who, although they lived two miles from Indiana University, may as well have been worlds away. He recalls,

I was known as Picture Man. I would photograph regularly and go back and give them prints. Every apartment you went into there would be some of my portraits hanging.

In 1991, Wolin left Crestmont to spend the next twenty years photographing Holocaust survivors and Vietnam vets.Â Until he noticed an item in the Bloomington Herald Times in October 2010.Â Crystal Grubb, a 29-year-old mother of two, had been murdered. "I immediately recognized her as one of my subjects," said Wolin.

The connection lured Wolin back to Crestmont.Â He started teaching a photo class at the neighborhood Boys and Girls Club, and would linger in the area after class with a box of old prints, making inquiries of passersby.Â It took a couple of months before he found someone he'd photographed twenty years before.

That subject led him to many others.Â To date, Wolin has made new portraits of 35 to 40 people he photographed two decades earlier.

The pendant portraits of Timothy Babbs on view in the faculty show juxtapose a rangy wild-eyed youth with a stolid middle-aged man.Â The presentation of the subject, and the setting, is similar in each black and white portrait.Â The continuity provides cold comfort, but ample meaning, in a way that only that abiding loyalty to a single medium could do.