Cat On A Hot Tin Roof: Restrained But Explosive 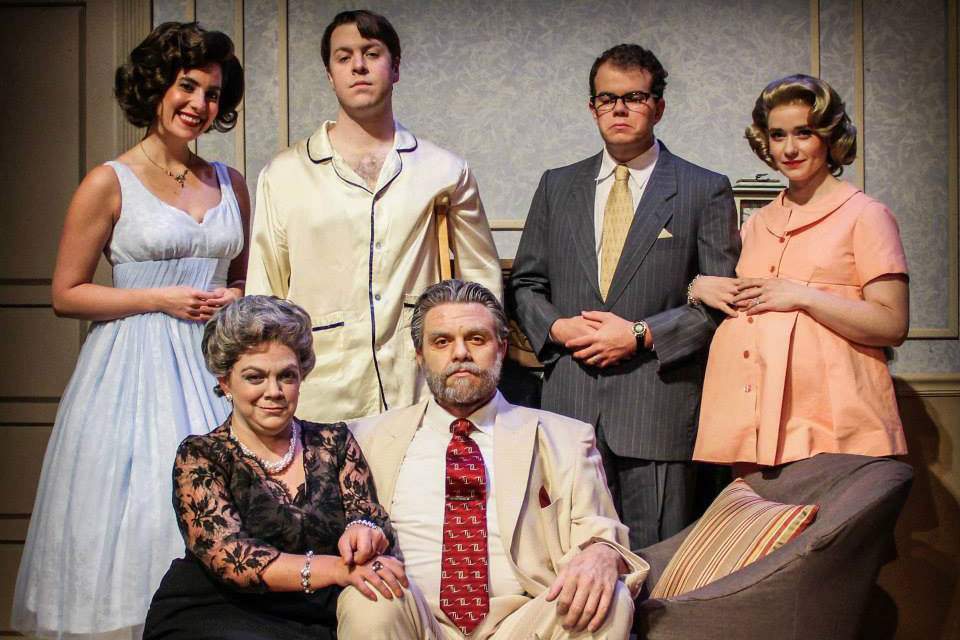 Tennessee Williams' Cat on a Hot Tin Roof is at IU's Ruth N. Halls Theatre. I caught it in a preview. It  is set in Lauren Ayn Lusk's nicely proportioned and appointed stage-wide and stage-deep room. It has a high domed ceiling with the backdrop of a very broad and deep continually changing sky subtly lit by Lee Burkes. And, as Big Daddy, the family patriarch never tires of repeating, it is in the middle of "twenty-eight thousand acres of the richest soil this side of the Nile Valley. "

The entire Pollitt family is assembled for the evening. There's the crude  Big Daddy, the innocent Big Mamma, older son Gooper,  his fertile wife Mae with their five children,  and the favored younger son Brick and his estranged childless wife Maggie.

Ostensibly they've gathered for the patriarch's sixty-fifth birthday party. Big Daddy, Clayton Gerrard, is exulting in the false belief that he's beaten cancer. He's feeling expansive.  With what he believes is a new lease on life he has big plans to kick over the traces and have a bit more fun than he's permitted himself. Meanwhille, Lawyer son Gooper, Zach Decker, with the active support of his wife Mae, Mara Lefler, is planning to seize control of the estate. Maggie, Andrea Mellos, with less than no support from her alcoholic former football hero husband Brick, Aaron Kirkpatrick, is doing her best to thwart them. The oblivious Big Mamma, Nicole Bruce, is just thrilled that everyone is together.

Cat on a Hot Tin Roof  begins innocently enough as Maggie, sitting in her slip, chatters on about the family and the weekend while Brick showers offstage. Tennessee Williams likes to let his characters talk and she pretty much fills the first act while Big Daddy will hold forth for much of the third. Never missing a beat, Mellos  tells us about the birthday, the family factions, opinions about this and that; some simply facts, some simply catty observations and some in between. We also learn that the apparently indifferent Brick has been making his own choice to sleep on the couch.

In the second act the charade of the birthday party comes drastically apart as Big Daddy and Big Mamma learn the truth about his condition. Throughout Nicole Bruce's presentation of Big Mamma is amazingly evocative of a whole type of older southern ladies. There's quite a drama with a lot of repressed, suppressed, and expressed emotions.  At one point someone remarks that a storm has passed. Big Daddy asks if they mean the storm outside or the storm inside. Throughout it all, Brick manages to float along in his alcoholic haze.

The strongest moments of the IU production of Cat on a Hot Tin Roof  in the final act belong to Clayton Gerrard as Big Daddy. He's not impressively big in the early scenes, but in the third act his long hard experiences and unexpectedly broad sympathies are all put on display as he desperately tries to redeem Brick. It's both an internal and an external struggle for a man not given to self reflection. Big Daddy admits that he doesn't understand why, but confesses that the only two things he's ever loved are his twenty-eight thousand acres and his son.  With his "foot on death's doorstep," he's making a case for existence. "Life is important, don't throw it away," is his impassioned plea and a fitting motto for the play.

The IU Department of Theatre, Drama and Contemporary Dance's production of Cat on a Hot Tin Roof directed by Marti Maraden plays in the Ruth N. Halls Theatre November 8,9 and 12-16.