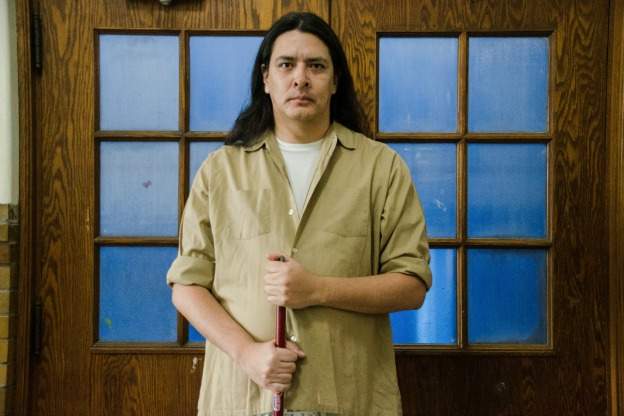 There's plenty of rancor about the absence of African American Oscar nominees this year. But others are applauding Hollywood's representation of a different minority group in the film The Revenant. Fully realized Native American characters are few and far between in the movies and on stage.

When I started auditioning way back in the day for parts it was mainly for "the warrior" role, or someone on horseback, Â and there wasn't much depth.

"When I started auditioning way back in the day for parts it was mainly for "the warrior" role, or someone on horseback, Â and there wasn't much depth."

Around six and a half feet tall, with long black hair, Proulx foregrounds his ethnic identity by introducing himself in the language of Ojibwe,Â and repeatedlyÂ referring to himself as a "First Nations" actor.

Proulx is from Canada, where "First Nations" isÂ the term Native Americans prefer. Whatever name you choose, he suggests, there aren't manyÂ respectable roles for indigenous people on stage or in the movies.

"It's very hard not to just always be cast in those stereotypical Native roles because they do exist out there. I try and stay clear of them, but I do bump into them time and time again with making the auditions."

A Character Worth Exploring

Lately, though, Proulx has found a Native character he can live with.

"I came to care for the guy a lot," he acknowledges.

In fact, Proulx cared so much for the character of Chief Bromden, that after an award-winning performance in an Atlanta production of One Flew Over the Cuckoo's Nest, he is reprising the role for Cardinal Stage's production in Bloomington.Â "Because it really is a meaty part," he explains. "Lots of layers to this guy."

Native people have been romanticized as those who are always closest to nature.Â MyÂ challenge is to say, 'What are the other possibilities besides that one image of him breaking out and going up towards the mountains?'

Chief Bromden is the narrator of Ken Kesey's 1962 novel on which the play is based. A long-term resident of a mental ward, Bromden is described in the novel as the son of "a full-blooded Columbia Indian chief." In the 1975 movie adaptation, Bromden was played by Native actor Will Sampson, but there have been plenty of other versions.

"Online you can find old photos of the production," Proulx notes, "because they do it all over the world. Some areÂ not exactly offensivebut they'll throwÂ a horrible wig on a white actor. And it's just so hokey. And so, as a First NationsÂ actor,Â I bring that integrity and that history with me to the role."

Whether Kesey wrote that integrity and history intoÂ the character in the first place is arguable. Â "We understand that it was written in a specific time period in history," Proulx concedes, "and it sits in that time."Â But heÂ hopes to bring the role out of the confines of that time. "My responsibility," he shares, "is not to fall back into those old stereotypes. I find it very very exciting to update it, toÂ reinterpret the text."

One way he's doing that is in re-imagining Bromden's hallucinations, which punctuate the novel and the play

I didn't see them as schizophrenic hallucinations, which is kind of how they were described. For me, they were more like dreamlike states in which his dad comes and visits him. Because for First Nations peoples, dreams are pivotal times for communicating with those who have passed on. So that's where I'm approaching those monologues and moments in the piece: that it is a dreamlike state where he is awakening to his father's voice, and that healing is beginning to occur for him because he has been so numb and so in a shell.

In the original text, Bromden ultimately seeks refuge in the natural world, a fate that Proulx associates with Kesey's dated conception of the Native American experience-

Native people throughout historynot only in film, TV, and on stagehave been romanticized as those who are always closest to nature, and that's where they only exist, and so the challenge in approaching this piece as a contemporary First Nations actor is just to say, 'Well, what are the other possibilities besides that one image of him breaking out and going up towards the mountains? What's his story after that?'

Proulx hopes to inspire Bloomington audiences to consider the alternatives.