I Like To Be In America, Cardinal's West Side Story 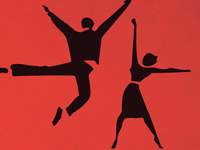 Can West Side Story be fifty years old? The older immigrant Irish and Polish Jets and the newly arrived Puerto Rican Sharks would be in their late sixties. Their testosterone levels and perhaps even the fears that they fueled should with age and experience be eased. The small piece of turf that they fought over was demolished for the construction of Lincoln Center. Ironically it's a venue that's hosted more than one production of the musical. And still generations of young male and female actors and audiences of various ages rehearse the interracial conflict, the tragedy and the healing of this moving drama.

Cardinal Stage Company's impressive, involving and moving production in the Buskirk Chumley Theatre is a fitting finale for the company's creator Randy White. The clever set design by Jackie and Rick Penrod challenges and neatly fits the space with wide open areas for the streets and intimate settings as well. The choreography by Diane Buzzell and her son Mathew Weidenbener is an updated homage to Jerome Robbins original work. Fight choreographer Leraldo Anzalda masterfully makes the battle scenes dramatic for the audience and safe for the actors. The very active lighting by Karen Spahn is an integral part of the drama. Conductor Sue Swaney, great diction by the cast and the work of sound designer Mike Price made the songs and the dialog crystal clear.

The cast offers a nice mix of out of town and local talent. Of the twenty-four Sharks and Jets sixteen are from IU, three are from Bloomington High School North and one- a soloist- comes from South. Daniel López plays Tony the optimistic graduate from the Jets. López was a resident artist with the Indianapolis Opera and it's clear that on the Saturday afternoons while the rest of the Jets were playing stickball his Tony was listening to the opera. Deborah Apodeca who describes the musical as a "beautiful story" is the Puerto Rican girl that he's smitten with. Melissa Rapelje is Anita. This is a chance for her to revisit the fiery character. Jason Merslich and Trevor Purkiser come from Evansville to play Chino, Maria's intended and the Jets' cocky Action.

West Side Story begins with the energetic chaos of the Jets. Then it seamlessly moved to those squeaky clean Jerome Robbins ensemble moves that no New York gang ever did, but we're caught up in. Scott Van Wye's Riff is very much the leader, theoretician and spokesman. Conflicts begin early and the Puerto Rican Sharks led by Bernado, Caleb Faith are very much on their mettle. The dance at the gym presided over by a comically clueless director becomes an all-out and very colorful contest of early rock and Latin styles. It's here that Tony and Maria meet and it's also here where the preliminaries for the tragedy are set.

Tony and Maria's love grows through their hopes for "Tonight." Caroline Huerta as Rosalia and Anita spark the dual over the dream of Puerto Rico versus the realities of Manhattan in a very funny "America." Riff counsels his hyped up troop to be "Cool." With their touchingly staged mock wedding, Tony promises to stop the upcoming rumble. Just as in the Shakespeare original of the star crossed lovers, Tony's efforts fail. Riff is killed by Bernardo. Bernardo is killed by Tony. The living flee and the lights go down on the lifeless bodies ending the act.

After the deadly drama of the first act comedy prevails in West Side Story. Maria and the Shark girls sing the gently taunting "I Feel Pretty."  Lucia Walker solos nicely in the paean to country life, "Somewhere." The remaining Jets do a very funny job with "Gee, Officer Krupke." Tony's bags are packed, but Anita, Maria's messenger is gang rapped by the Jets and tells him that Maria is dead.  A distraught Tony begs Chino, Bernardo's hapless avenger for death. And when he sees the very much alive Maria, it's too late as Chino fires a fatal bullet.

For the final funereal scene, the formerly submissive Maria demands that the Sharks join the Jets in what may be a long ranging invitation to reality as they lift and carry Tony's lifeless body. Cardinal's staging places the three adults of the play Alan Craig's comic Officer Krupke, Michael McGregor's baffled Doc and Jack O'Hara's finely tuned Lieutenant Shrank as mute observers. It's one of many powerfully moving moments from the production.

The Cardinal Stage Company's West Side Story at the Buskirk Chumley Theatre plays through June 25.