'Doing One-Person Shows Can Make You A Little Crazy' 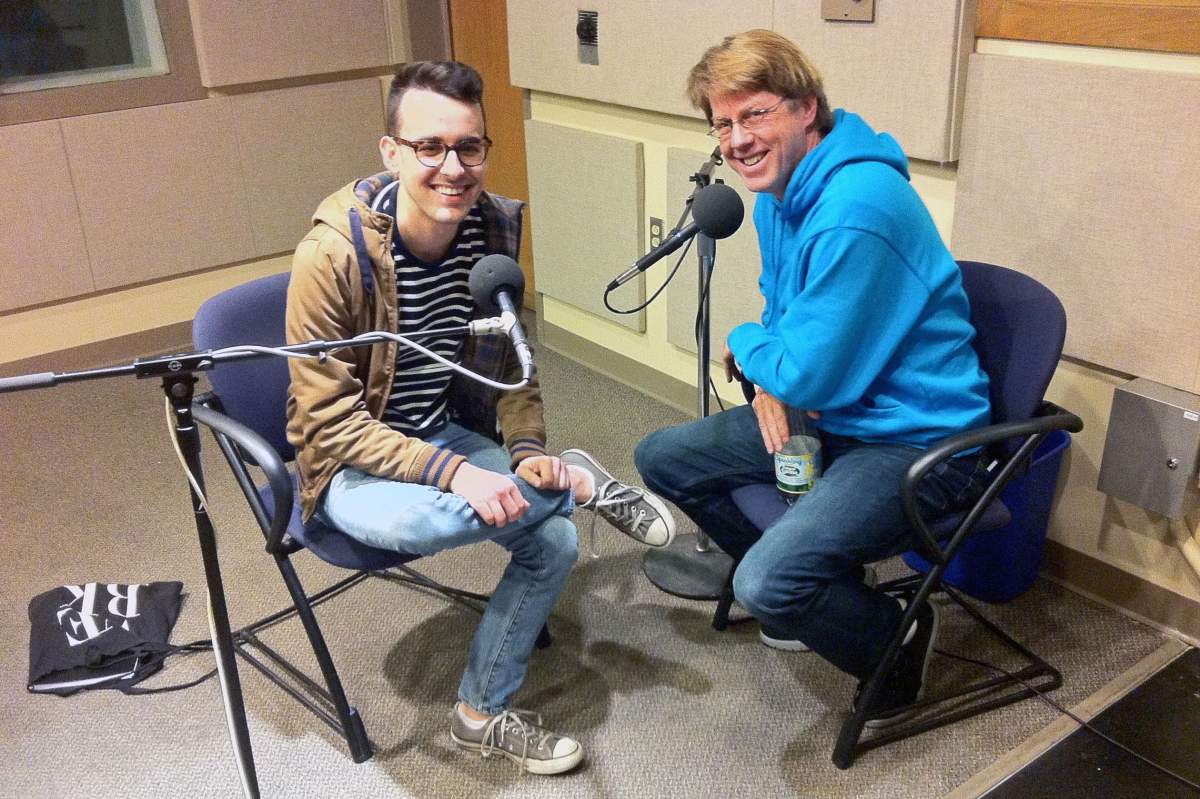 Cardinal Stage Company is presenting two one-person plays this month.Â The Agony & Ecstasy of Steve Jobs follows the trail of Apple's electronic products all the way to factories in China. Buyer And Cellar is set inside Barbara Streisand's basement shopping mall.Â Remy Germinario plays the young mall curator in Buyer; and David Knell is the narrator for Agony.Â They came into the WFIU studios this week to talk to each other about the ebbs and flows of their careers and the difficulties of being the only person on stage.

Alone Under The Lights

Remy Germinario: Before we even met, they sent an email about the startup process of it all. We found each other on Facebook and were comparing notes about the memorizing and how difficult it really is for one-man shows.

David Knell: I got cast two months ago, and so what I've been doing for the last two months is just saying these words everywhere. And I remember seeing an email from you like two weeks ago, saying, â€˜Well, got the script. Time to start memorizing.' And I'm thinking, I hate you already!

RG: But it was still a challenge. This is definitely the most challenging thing I've ever done, because usually you have cues from your scene partner...

RG: ...To give you, â€˜Oh, they said this so now this is my line.' But literally, you're your own scene partner. Especially in my show. I play me. I play the narrator's boyfriend. I play Barbra Streisand. I play James Brolin. I play two other characters. And I'm literally switching back and forth having conversations. In a way that makes it easier. I saw your show the other day, and yours is a lot of talking to the audience as you. So, it's more difficult.

DK: It's crazy. It's nothing like anything I've ever done before. I actually had a moment the other night, after doing two shows in a row, there was one part where suddenly there's another voice in my head going, â€˜You already did this scene.'

DK: I'm going, â€˜What?' And I'm looking for evidence from people the audience. Do they think I'm insane? Do they think I'm doing this scene twice? I looked behind me and there was a slide on the wall that sort of confirmed I was in the right place, so I had to calm that really unwelcome voice in my head. But man, doing one-person shows, it can make you a little crazy.

The Stuff Of Theater

DK: My dad is an actor and has been an actor forever, and he's been telling me for years that I should be getting into regional theater. I was an understudy in a show on Broadway when I was 17 and then I moved out to Los Angeles and I was in the moves for a good decade. Now I live in Portland, Oregon and I'm back to doing more theater.

DK: Honestly, it is a perfect play for me to do, and I intend actually, after this, to take it and do it in other places and run with it.

DK: And it's a good thing like this, as you know, to have something in your pocket.

RG: Especially since they're so new. Both of the shows are new, and I think they're both very relevant, too.

DK: They're both about stuff.

RG: Yours is aboutâ€¦

DK: ...how stuff is owned and hoarded.

RG: Exactly, that's absolutely right. And what is the meaning of possessions.

DK: And what does it say about me.

DK: Is that something you feel that you want to continue doing?

RG: Absolutely. You know, I graduated from college about three years ago, and I'm at this not crossroads but I'm at a point in my acting career where you really want something to kind of go into the next life-changing stage of your career. So, I think this is a fantastic addition to my resume, and I hope to do it again. I hope this isn't the last time me and Babs will be playing together.

DK: Why don't we just take this as a two-personâ€¦

DK: Well, we should wait until the run finishes here. You think?