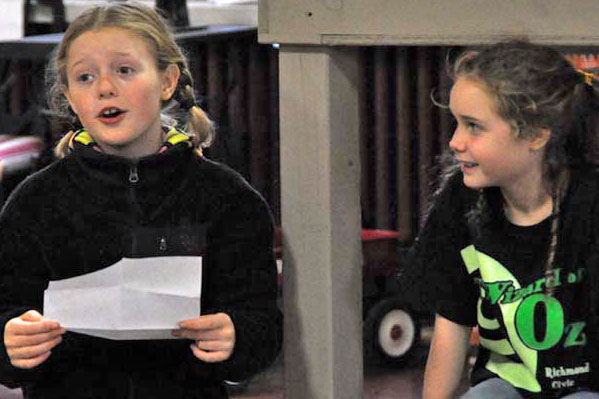 The Cardinal Stage Company brings that red-headed orphan, Annie to the Buskirk-Chumley Theatre in a production directed by Randy White December 16-January 1.

Emma Ostlund and Lola Kennedy share the role of Annie and Maria Izzo-Walker plays Grace, Daddy Warbucks' secretary. Grace spends a good deal of time on stage with Annie, so we asked Izzo-Walker how the two differ. Her response was a politic one. "They both are smart, bright, energetic girls. And each brings a bit of her own special style to the part."

Since Ostland and Kennedy get to see one another, we asked if they pick up on one another's moves. "Yes," said Ostland , "especially in the opening scene with the orphans we do help one another." Kennedy agreed, and added that the key for both is "to really pay attention."

The role of Annie is a challenging one with direction by Randy White, help with the music from Jay Ivey and choreography by Diane Buzell. Both of the young actors agreed that it's the singing that's the hardest part. "It goes really high, and I'm happy that they've trained our voices to reach the high spot," said Ostland. Kennedy added that "Sue Swaney came in from the IU Opera and she helped us too. She told us to do it ‘bratty' almost. You have to squinch up your nose. It's funny, but it makes it easier."

When it came time to ask what parts of the show they thought the audience would like best, each had a different approach to the answer. "I think probably Annie's strong character, her really big spirit, and her ‘bondingship,' how she interacts with people and changes their lives," said Ostland. Kennedy spoke about Daddy Warbucks. "I like how he changes. First, he's kind of a mean old guy, and then he starts to be really nice. One of my favorite scenes and my favorite song is "I Don't Need Anyone but You," which is where he adopts me. "

We couldn't resist asking the same question of Maria Izzo-Walker. "I think the charm is the character of Annie, how her optimism and spirit transforms the lives of most everyone that she encounters and the message that family can be found in the most unexpected places."