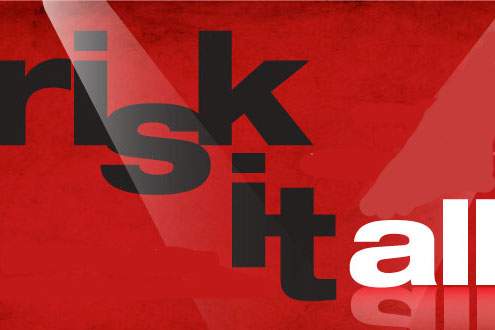 Cardinal Stage Company opens their "Risk It All" season with the risks of Atticus Finch in To Kill a Mocking Bird on September seventh and then moves on into the season.

Fans of classic Alfred Hitchcock and his risky dramas will be pleased to see The Thirty-Nine Steps but perhaps puzzled by a cast list of just four players. "It's an homage and spoof," says Cardinal's founding producing artistic director Randy White. Â "So you get one actor playing Richard Hannay, the main character. One girl plays all three femme fatales. And then the other hundred and some roles are played by our own Mike Price and IU's Adam Noble. It's a loving take on what theatre can do the magic of theatre. "

Cardinal ends 2012 with their holiday production of the courageous Dorothy taking the risks, in The Wizard of Oz.

Opening 2013 is New First Stages. "Cardinal's mission is to be a professional regional theatre. I don't think you can be one if you're not taking the risk of developing your own work and finding your own voice in new plays," Says White. "The plan is to bring together about four of five playwrights, local and from around the country with real national profiles,Â to workshop plays, put on readings, get feedback and hopefully be able to choose one play for the following season. The goal is for Cardinal to produce a new play each year."

"And then it's on with the musical Next to Normal in March. "Next to Normal was a phenomenon on Broadway," says White. "It actually won three Tonys and won a Pulitzer for its book. It's the story of a family that's in crises at risk and how the family comes together. Â The score is glorious. It's almost sung through as a kind of rock, rock-pop musical. When I saw it in New York I sat there thinking â€˜this is as good as it gets.'"

Wrapping up the adult season in May is Underneath the Lintel. "It's probably the play that I am closest to in my entire history in the theatre," says White." I spent two years working with the writer Glen Berger, who just wrote the book to Spiderman. It ran for four hundred and fifty performances New York. Since then, It's had more than two hundred productions and been translated into a dozen languages. "

"Underneath the Lintel is the story of a fusty librarian on a mission. One day a book is returned, a hundred and thirteen years overdue. He just has to track down the miscreant and give him the fine of his life. The librarian ends up going on a journey that's a huge metaphysical question wrapped up in the risks of an adventure story. Â It's a very funny and gloriously wonderful play."