Cardinal Puts Wings To "The Wizard Of Oz" 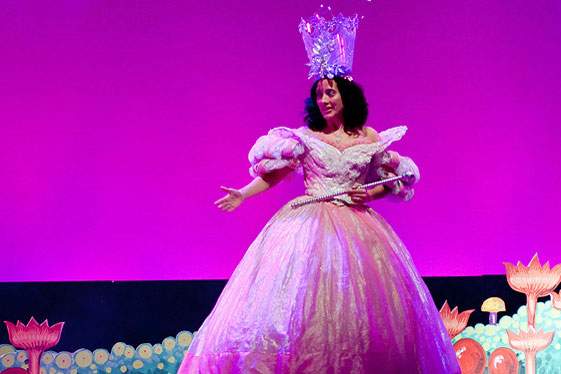 Just when every other performing group that isn't doing a midnight mass is packing up, the Cardinal Stage Company opens their flying production of The Wizard of Oz. This new production directed by Randy White bridges the season from December 21 to January 5.

Recent Indiana University graduate Charnette Batey plays Dorothy. Theater goers have seen her as the aged temptress Lola in the Indiana University Department of Theater & Drama production of Damn Yankees, and as the one-year-old Trixie in Cardinal's Knuffle Bunny. The ruby-slippered Dorothy is somewhere between those two roles.

"It's kind of fun to play a character like Dorothy who's closer to my age," says Batey. "There are some big shoes to fill, but I can relate to her. She's very imaginative, innocent and hopeful. I love the journey that she goes on and that when she comes back home she really values it. Â It's great to play a character like that because I also value my family and home."

Another veteran of Bloomington area stages, University Elementary student Eleanor Lloyd, plays one of the special Munchkins. "Usually I play children, but this time it's different," she says. "The Munchkin-Coroner is the character who's called in to check out the witch to see if she is really truly dead. She is, and I get to announce it."

Lloyd was impressed with the professional atmosphere of the production. "Our director Randy White says that although we Munchkins are children, we are being treated as professionals. So, we need to act as adults just very small odd adults."

When we spoke with Batey and Lloyd, they were well into rehearsals but still eagerly awaiting the arrival of the flying equipment that will whirl Dorothy high over the stage. Additionally, the formulas were still being worked out for those explosions that are a special feature of Cardinal's production.