Cardinal For Kids: It's Fun To Have Fun, But... 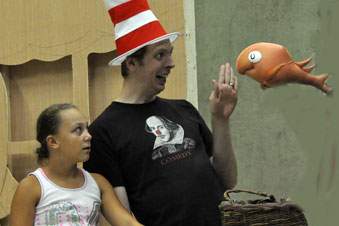 The Cardinal Stage Company's "Cardinal for Kids "series presents The Cat in the Hat. Christine O'Grady who directed last year's Knuffle Bunny is back to direct. Ben Abbott who played the dad who rescues the bunny is back to play the zany cat. Eleven year old Cardinal veteran Hadley Abram is one of the actors who play the cautious Sally.

She tells us that this is not a typical musical, but a play with musical and many sound effects. "There are a lot of sounds and everything that happens in the play has a sound effect," she says. "For example a tennis racquet gets thrown in and there's like a swishing sound. " Abram says that coordination takes practice.  "It takes a few tries to get the sound cue and the tennis racquet at the same time."

As the cat, Abbot is also very much involved with props. "One of the first games that the cat likes to play is balancing. So I have to stand up on a big ball and balance three books and a cup and a cake and a milk and a dish. There are things flying through the air. The fish of course is thrown high and we have to try to catch it in whatever is handy …a tea pot or bowl. It's amazing to see."  Abbott admits that he has some help. "Yes, as talented as I am at balancing we have a lot of help from the props department on that one."

Although Abbott is happy with his role, as a youth the cat wasn't his favorite from the book. "I actually sided with the fish," he admits. "My reaction was, Hey, get the cat out of the house. He's crazy.  Look at this. He's making a mess. The guy's insane. Ironically after a couple decades, I can sort of see things from the cat's perspective a little better. "

Still the cat is a trickster who can get people into trouble, so we turned to Abram for some final words. "At first Sally doesn't know what to think of the cat. He's kind of stranger who just walks into her house. Then, she sort of starts getting used to him. He didn't really leave the house in any worse shape that it really was and the cat did make the boring day a little better.

The Cardinal Stage Company's production of The Cat in the Hat plays Oct 5-19 in the Ivy Tech John Waldron arts Center.