Calling All Kates: A Bumpy Ride To The Glide 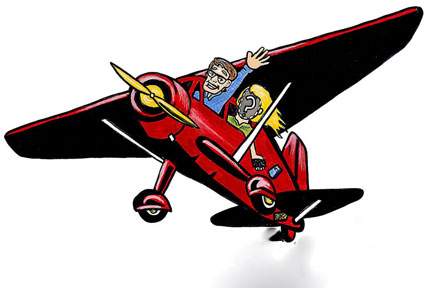 Calling All Kates at the Bloomington Playwrights Project is the latest in a series of  varied musicals from Emily Goodson and composer/lyricist Jeremy Schonfeld. BPP regulars may remember their Spun that explored the music and memories of a rocking brother and sister and their Greta about the liberation of a too dutiful daughter.

In 2014 a jilted man from Toronto was in the news as he offered a free round-the-world trip to a woman with the same name as his ex-fiancée. The BPP's Chad Rabinovitz read about it and thought, "this has to be a play." Goodson and Schonfeld were recruited and created Calling All Kates. Other commitments took me out of town for the opening weekend and these notes come from the quite polished final dress rehearsal.

Mike Nappi plays the dumped Marc. He's just lost a ten-thousand dollar wedding deposit and although visibly shattered, he's darned if he's going to miss out on the detailed honeymoon tour. Like the man in the news, he's posted an invitation for a girl with the same name as his ex-girl friend. Emily Crowley plays the chosen Kate with a kooky and winning verve. Music director Benjamin Aaron Smith plays percussion and everything from air traffic controller, to pilot, to generic Frenchman and several other roles in between.

As things begin in Calling All Kates Marc and Kate are strangers and they each are carrying a lot of baggage. Mike Nappi's  Marc has, allergies, tics and more hang-ups than a bad phone service. Nappi's a gifted physical comedian and uses the full stage for walking, jumping and even rolling around. Emily Crowley's Kate is a freer spirit, but with plenty of her own defenses and limitations.

The story from Emily Goodson with Jeremy Schonfeld's songs work nicely to show us the outside and a bit of the insides of Marc and Kate and to chart their growing understanding and affection for each other. Things begin a bit inauspiciously on the plane with a defensively empty seat between them. It's Kate's first time on a plane.

As they tour their imaginary destinations there's the tentative first glimpse of the Eiffel Tower, an eye opening  first shot of espresso, and finally a victorious preparation for Kate's dream and Marc's nightmare, hang gliding. Both the actors are good singers and the personable music director has a lovely voice and presence. The other members of the quartet play very well and even sing a bit.

David Wade's scenic design for Calling All Kates does more than double duty as a futuristic airline terminal, seats on the plane, tables, chairs and even a gondola.

With the help of a few props, the active music director and the songs, the duo travel the world with the briefest of stops. Plays about love between mismatched couples and how they work things out abound. Barefoot in the Park comes to my mind and I'll bet you'll think of others. It's a wonderfully universal theme and aren't all couples at least a little mismatched?