Finding The Sweet Spot Between Baking And Building 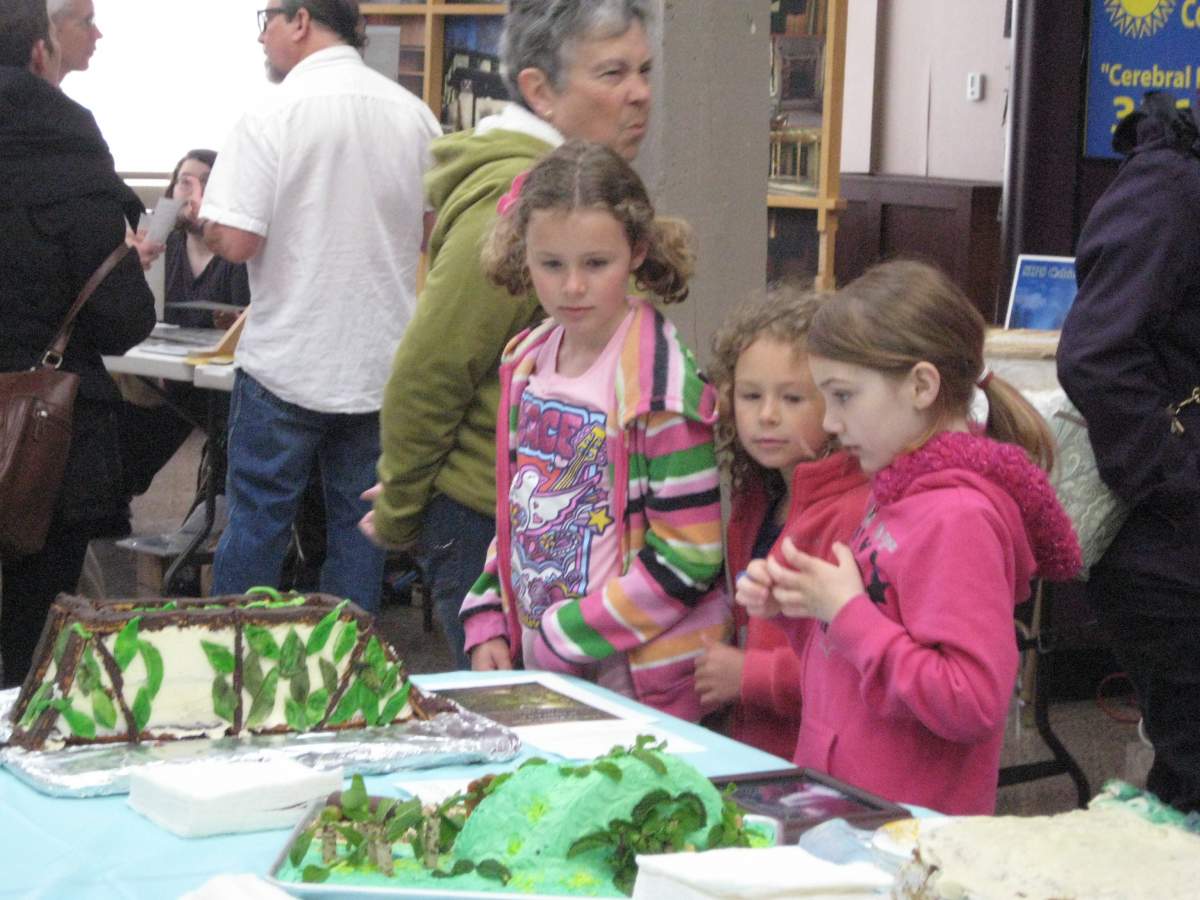 What do cakes and old houses have in common?

The unlikely pairing that is the Old-House Expo and Architectural Cake Contest begs the question.  The second annual event, held May 11, 2013 in the Bloomington City Hall atrium, brought amateur bakers and tradespeople out of the woodwork for a day designed to raise awareness about historic preservation.

Part of the local observance of National Preservation Month, the event offered exhibition space to local professionals in the business of restoring historic structures, along with organizations dedicated to the preservation of the local cultural heritage.  The cake contest assumed the role of the expo's centerpiece.  Its display of eight historic structures or objects ranged from a carpenter's plane to the Taj Mahal.

A Venerable Panel Of Judges

Judging the cakes on the criteria of overall appearance, taste, and faithfulness of representation were Gayle Cook, architectural historian, expert on domes, and ardent preservationist; Tommy Kleckner, Indiana Landmarks Western Regional Office Director; and Erica Sagon, a professional baker based in Bloomington, who writes for and edits Edible Indy magazine.

Historic preservation is all kind of tied up in the architecture, but really that's really just the visible artifact that we can still see.  What we're really looking at is the overall picture of heritage.

Such highly credentialed judges notwithstanding, the competition was mainly symbolic.  Indeed, each of the eight cakes entered won a prizefrom the "Masterpiece" prize for author Carrol Krause's Downton Abbey cake, to the "Mid-Century Modern" prize for a replica of a limestone ranch by Chase Martin and Amy Payne.

None of this year's bakers entered a cake in the Professional category, although some entrants had quite a portfolio.  Edwardo Rhodes, winner of the inaugural competition last year, makes several elaborate wedding cakes a year and has won ribbons at the state fair.  College student Sarah Schwabe, 20, who'd never entered a cake contest, was inspired to create a massive model of the Taj Mahal.

"We saw the potential to attract the interest of young people," explained Preservation Board chair Nancy Hiller, "the next generation."

The Spirit Of Play

Judging from the number of children hovering around the cake display, waiting to sample these edible landmarks, the board's goal was met.  Additionally, the contest seemed to inspire a childlike spirit in the entrants.

"To me, the opportunity to play with food is something you don't get much as an adult," admitted Nancy Hiestand, Program Manager for Historic Preservation for the City of Bloomington, "and I have often felt that I'm at an eighth-grade slumber party doing this."  Hiestand's team created a cake representing an old brick filling station on Bloomfield Road.

Rhodes, whose official title is Professor Emeritus in the School of Public and Environmental Affairs at IU, would concur.  "The purpose of the cake is to be consumed, have fun.  And the nice thing about a cake is that other than pictures, when it's over, it's over.  It's gone."

And in that way, not at all akin to an old house, contended builder Chris Sturbaum, whose Golden Hands Construction Company was represented at the expo.  "I never think a house has to come down.  It usually can be restored and repaired and nurtured into the future.  That's why I'm not confusing cake and houses."

When A House Is Not Just A House

But houses might be considered just the icing on the cake in the larger enterprise of historic preservation.  While its most obvious business is in shingle and clapboard, the real focus of preservation extends beyond the buildings to broader cultural concerns, according to Chase Martin, cake designer and vice-chair of the county's preservation board.

"It's all kind of tied up in the architecture, but really that's really just the visible artifact that we can still see.  We are concerned with understanding local communities that may not have endured, and preserving their stories.  What we're really looking at is the overall picture of heritage."

So perhaps these cakesfey, pretty things born of the creative impulse and the spirit of play, and consumed in a matter of hoursserve as the most apt symbol for the preservationist's endeavor, after all.  While we admire the before-and-after photographs of vintage structures that have been saved, isn't it the life that existed within those wallsfugitive and intangiblethat we're really trying to get at?