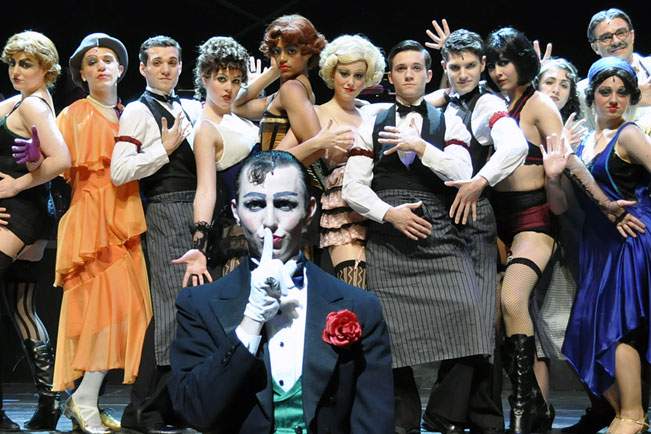 The political turmoil of Germany in the 30s is the background for Kander and Ebb's musical Cabaret. It begins in the first scene as Kurt Semmler, the American would-be-writer Clifford Bradshaw, riding the train to Berlin is the innocent dupe of a smuggler played by Colin Van Wye. Cabaret is a story of the nascent rise of Nazism over the cooling ashes of the parties of the roaring twenties. It's a chilling story, served cold at the Lee Norvelle Theatre and Drama Center.

The production directed and choreographed by George Pinney is athletic, skilled and drilled to both impress and distance the audience. Tim Barbiaux's scenic design, creatively lit by Abby Wells emphasizes the seedy quality of the Kit Kat Klub with neat and economical gestures to accommodate the other brief scenes. Katie Cowan's costume designs are a nice fit for the design with lots of flash and grit. Neither setting nor the dress are designed to entice the audience in. Likewise, the main characters have been coached to impress, but keep the audience at a distance.

Hannah Slabaugh was Cabaret's doomed party girl, Sally Bowles. Even in her very fine singing gave the impression of  being a disconnected china doll. Evelyn Gaynor powerfully portrayed the sad Fraulein Schneider both dramatically and vocally…again the main songs delivered straight out into the audience ignoring others around her on stage and the listeners in the seats as well. The one exception to the coolly objective approach was in the role of the Emcee. Evan Mayer was magnetic as the frighteningly friendly, seductively scary character. He was always on his game whether it was better than you'd expect dancing, fine singing and even better acting.

Mayer with Kit Kat Klub Girls Carrie Van Doren and Julian Ramos were a hit with the "Two Ladies" for one man sketch. Tenor Markus McClain led the entire cast in a scarily lovely performance of "The Future Belongs to Me." The orchestra led by Music Director Jay Ivey had just the right rhythms and sound for the period feel. Each and every member of the large and varied cast was always up and ready for a very challenging production.

The master stroke of the evening was the final scene as two long dark drapes descended from the ceiling to cover the stage left and right. First the Klub's staff and patrons were covered and then everyone except the escaping American, Cliff Bradshaw, and the Emcee were ushered behind the curtains. The lights dimmed leaving only the clownishly made up face of the Emcee in the spotlight. It was a lovely dramatic moment.