By the Bog of Cats 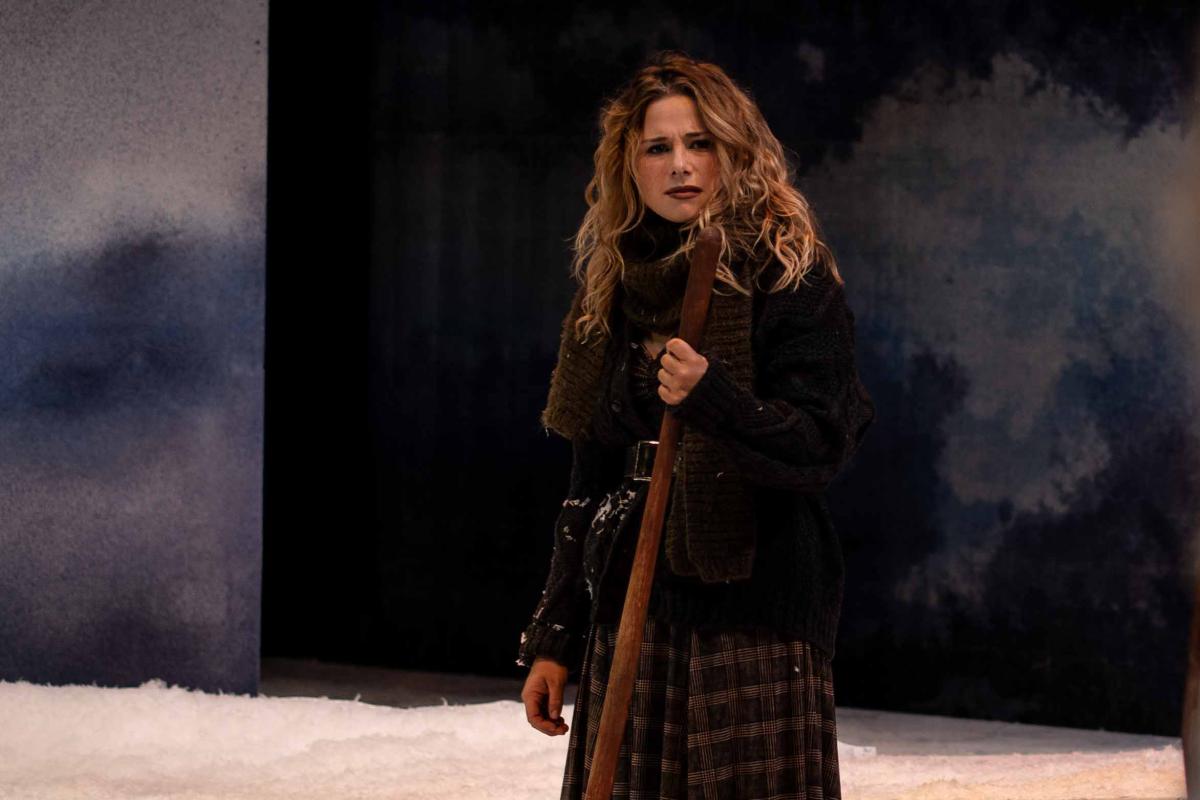 The IU Theatre opens their 2019-2020 season with a set of characters and a play stuck in timeless midlands of Ireland, Marina Carr's By the Bog of Cats. Kristen Martino's set is of a desolate landscape with a broken down caravan at the back and menacing clouds, lit by Megan Branham. The only color is of a red trail of blood as Hester Swane, Ellise Chase drags a dead swan across the snow.

Hester is forty. She took to Carthage Kilbride, Sean Puent when he was sixteen. The two were together for fourteen years. She says she made him by giving him her money for land. The two has a child, Josie Kilbride, Josephine Wooldbridge. Now Carthage would marry Caroline Cassidy, Samantha Rahn and receive more land from her father Xavier Cassidy, Christopher Plonka. Hester has been waiting for the return of her mother, Big Josie since she was seven and she says that Carthage is hers.

Carthage's mother Mrs. Kilbride, granny…whoops, "grandmother" to young Josie is the larger than life Glynnis Kunkel-Ruiz cheating at cards to beat Josie and physically moving people as she circles the table in a strangely revelatory speech about her relations with son Carthage at the wedding celebration feast. A special guest is Clark Conrad as the blind seer Catwoman lapping her wine from a dish and despite it being her day off, talking to ghosts.

By the Bog of Cats is a mind boggling play. It begins with Samantha Rahn dressed as a bride playing "the Parting Glass" on the violin from the balcony. Everyone seems to know everything about everybody and they're stuck with it. Elise Chase's deeply involving portrayal of Hester is at the center of it all. She's a real mystery. She's a passionate living historian of the area. She's often a truth teller and in her determined ways she's often crazy. Somehow her determination to wait for the return of her mother and her passion give her power. Everyone from Xavier Cassidy to Caroline Cassidy to Carthage Kilbride and even her friend Monica Murray, Katie Malish try to placate her.

At Saturday night's performance I was especially moved by Josephine Wooldridge's portrayal of the seven year old Josie. She was wonderfully effective as that little girl. Clark Conrad was a welcome mystery as the Catwoman, who "knows things." Noah Marcus was wonderfully funny as the confused Father Willow at the wedding feast. Nathan Carey as Young Dunn, a fellow who wanted to be an astronaut, but thought he'd follow his father's lead and cut peat on the bog was nice reminder of aspirations thwarted. Samantha Rahm was movingly pathetic as the apologetic bride Caroline Cassidy. Katie Malish as Hester's friend Monica, still has me baffled…she's the only normal person in the play.

Marina Carr's By the Bog of Cats directed by Ansley Valentine plays through October 5th in IU's Wells-Metz.