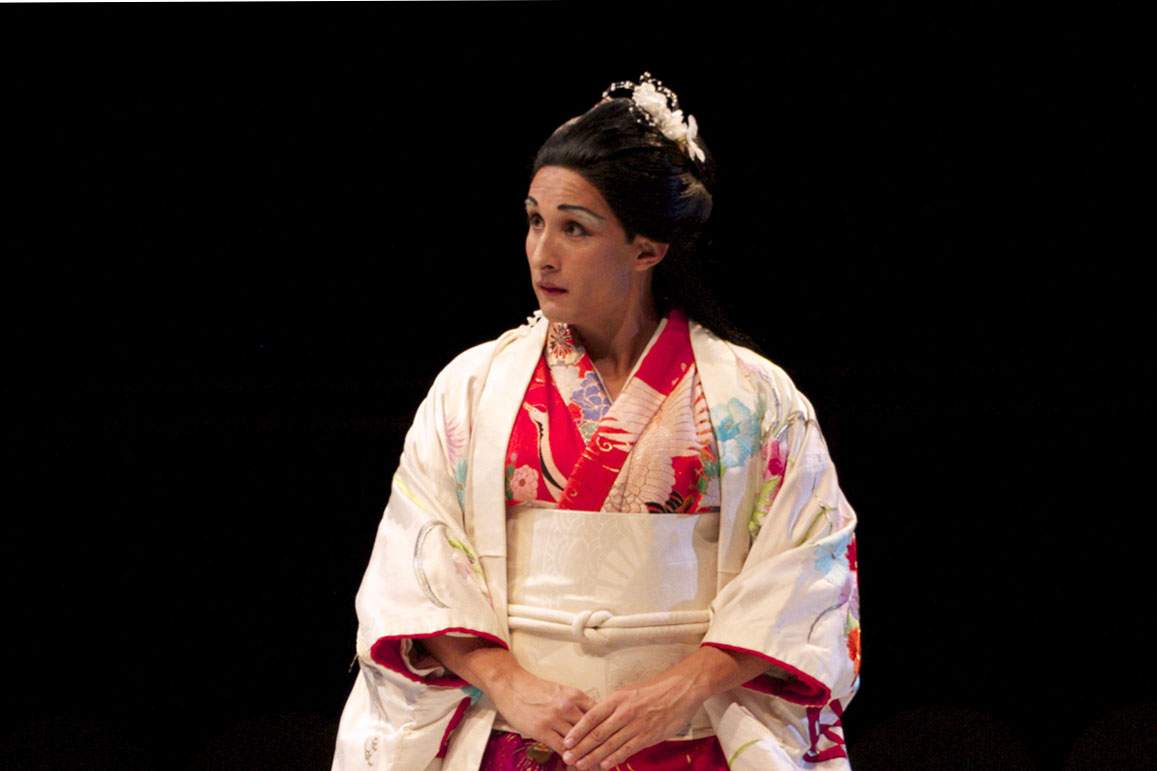 David Henry Hwang's Pulitzer Prize winning M. Butterfly is at IU's Wells-Metz Theatre in a strongly imagined production directed by Murray McGibbon with a very fine cast. The play is based on the real life story of a French diplomat arrested for treason. Stationed in China and later Paris, he'd given away state secrets to his lover, a Chinese opera diva. All during their twenty-five year relationship he was either ignorant or refusing to believe that the diva was a man.

As M. Butterfly opens, Chris Handley playing the diplomat, Rene Gallimard, is in prison reflecting that he's not only in jail, he's a figure of fun of cocktail party gossip about his ignorance. The play follows his life, his youthful sexual fantasies and botched exploits, his traditional marriage and his long love affair with Song Liling, first in Beijing and later in Paris. Throughout his life Gallimard wrestles with his own feelings of inadequacy through the story of Puccini's caddish Lieutenant Pinkerton and the compliant Madama Butterfly.

It's a terrible way to model manhood or woman hood and eventually shatters, but for a time his relationship with the diva actually empowers Gallimard in his job and even in his relationships with other women. Handley does a very good job of projecting a character that evokes many reactions…pity, sympathy, contempt, even occasionally admiration.

Guest artist Nathaniel Braga played Song Liling. At first she's the opera diva who ensnares Gallimard. Later she's a victim of Mao's Cultural Revolution sent to a labor camp and later as a spy sent to reconnect with Gallimard in Paris. In the first part of  M. Butterfly Liling is very much in control developing her relationship with Gallimard. Then as the Cultural Revolution sweeps away traditional high culture, she's spat upon and reduced to farm work. Finally the revolution decides that she'd be of more use with Gallimard in Paris and she reconnects. Braga does a fine job as the diva and we can see how she fits into the role that Gallimard so much wants her to play. At the same time, and this was tricky, I think that Braga kept reminding the audience that he was indeed a man playing the part.

Andrew Nile was a charmer as Marc, Gallimard's rakish friend from childhood. He's  the one who arranged his first sexual experience, continues to egg him on to further adventures. Marc even appears as the Consul when Gallimard is playing out his fantasy as Lieutenant Pinkerton in Puccini's Madama Butterfly

Kelsey Shaw was a flexible actor as the student whom the newly empowered Gallimard has an affair with, a woman at a party mocking Gallimard's story in the press and as a vision from a magazine brought to life for the teen aged Gallimard.

Heather Michele Lawler was quite perfect as Gallimard's traditional wife, a woman actually quite happy with her role as an embassy wife in China despite her suspicion that Gallimard was having an affair.

Matthew Murry held the stage nicely as Rene Gallimard's duplicitously political boss in the Beijing Consulate, as an extra man in a variety of scenes and as the judge who demands the explanation of the mystery of Gallimard's love affair with Song Liling.

The quartet of Kurogo Dancers , Julia Dorf, Ke Meng, Peihao Wang and Ansa Woo  were charming in their gracefully stylized flowing movement, the lovely martial arts stick and sword ballet from the opera and then frightening as the enforcers of Mao's Cultural Revolution.

Katie Cowan Sickmeier's costumes ranged from Gallimard's prison pajamas through the drab uniforms of the Cultural Revolution to the snappy suits of the embassy, the dramatic garb of the dancers and some of the lovely gowns for Song Liling.

M. Butterfly is a fascinating play and up close in the round at IU is a great way to experience it.  Its history and character driven with a terrific story. It's dramatic and also frequently funny. There are lots of opportunities for insight into East-West, Female-Male  stereotypes and how they strait jacket understanding and  international and personal relationships. But at its heart as director Murray McGibbon says, "it's a desperately sad love story," and the final scene where both Gallimard and Liling bare the realities and the dreams that they can't reconcile or abandon is a great moment of theatre.

The IU Department of Theatre, Drama and Contemporary Dance's production of David Henry Hwang's M. Butterfly plays Tuesday the 28th through Friday the 31st at 7:30 and Saturday November 1st at two and 7:30.