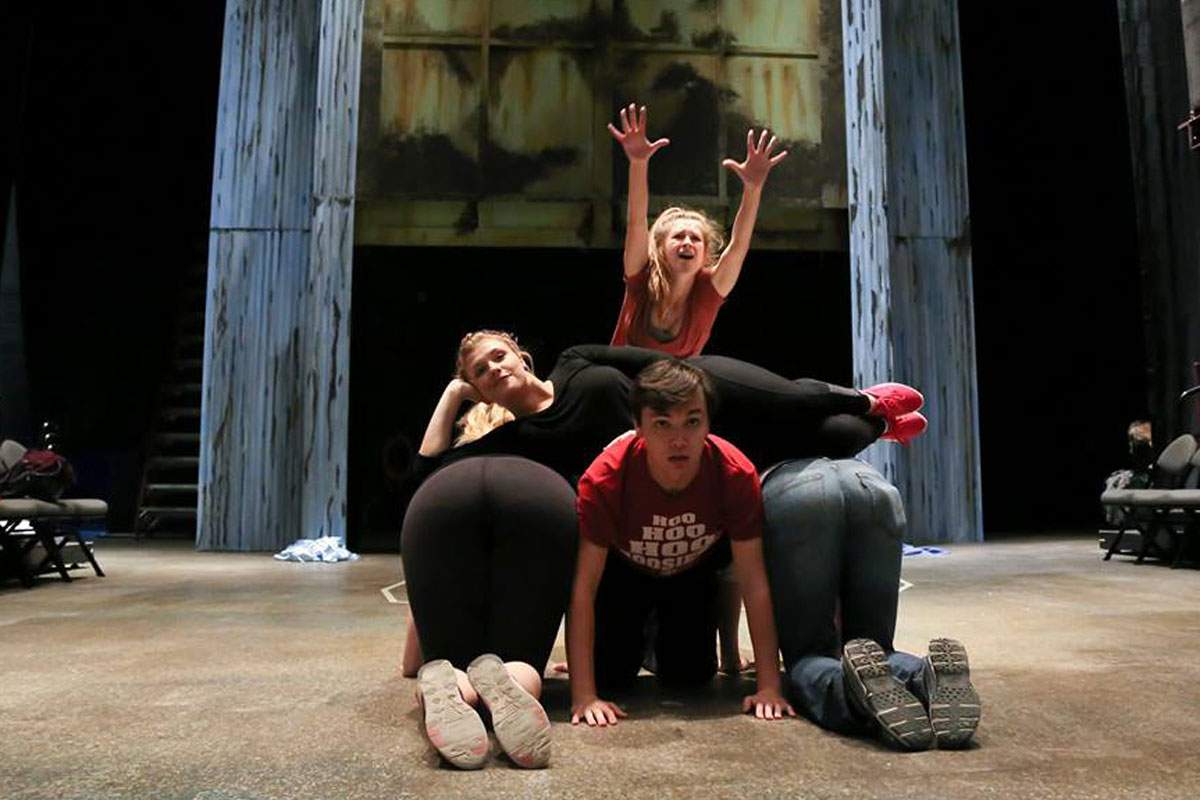 In Anne Washburn's Mr. Burns, a post-electric play at IU's Wells-Metz Theatre the grid has gone down. There's no electricity, no lights, no radio, no TV and no power for the generators that power the cooling for nuclear power plants. Small groups are gathering and among other things trying to rebuild their cultural frameworks. Are they sharing battered copies of the Bible, Shakespeare, the Greek and Roman classics? No, they're fondly remembering scraps and bits from the TV show The Simpsons.

In particular they're working on bits and pieces from the episode inspired by the film Cape Fear...both the original with Robert Mitchum and the remake with Robert Deniro. As Mr. Burns begins Jason Craig West and Courtney Reid Harris are reminiscing about the scenes. At a point of frustration there's a brief interruption as Tara Chiusano brings in a story of a courageous worker trying to save one of the nuclear sites with siphoned gas, but then it's back to the TV show. Scott Wye appears as a traveler from another area with more bad news about the devastation. He offers a nicely done parody of Gilbert and Sullivan a' la Kelsey Grammer, as Bart Simpson's arch enemy Sideshow Bob. And there's a scene as the campers share disappointment over their lists of possible survivors.

Act two of Mr. Burns has the campers seven years later. They've evolved into a traveling theatre troupe, still very much focused on the Cape Feare episode of the Simpsons but with some forays into commercial work. There's some frustration with the competing troupes and even problems with difficulties in purchasing rights to remembered lines and scenes. The threat of Sideshow Bob persists even as they rehearse scenes and the Simpson's enter the witness protection program. Again it's a fast moving act probably more fun for Simpson's fans than others but seemingly well received by the audience. There were only a few seats emptied during the second intermission.

Act three takes the action seventy-five years into the future past the failure of the grid. Memory has become ritualized and we have a wildly costumed and played religious pageant. Once again Bart and the Simpsons are terrorized in a scene from the Cape Feare episode. They're floating on a neatly constructed and handled houseboat. However things have darkened over the years and it's not the buffoonish Sideshow Bob terrorizing the family, its Mr. Burns. Remember, he's the former proprietor of one of the nuclear sites that blew up with the failure of the grid.  Burns does his terrorizing in a scene that goes on a bit too long, but does conclude with Bart or at least Bart's spirit in triumph.

I think than general audiences will enjoy the first act. Simpson fans will have a better time in the second act and both will be challenged in interesting ways by the third.