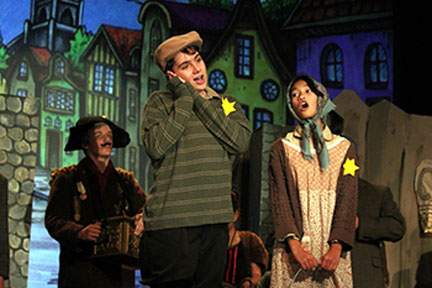 The Jewish Theatre of Bloomington and Stages Bloomington are joining for a production of Brundibar in an English adaptation by playwright Tony Kushner. The Jewish Theatre's Audrey Heller and Stages' Pat Gleeson discovered the play separately and were delighted to find that it fit so well into the goals of the two organizations. The show is directed by Pat Gleeson with music direction by Reuben Walker and vocal coaching by Sue Swaney.

Brundibar is what the children in Hans Kraza's little opera call the town's evil organ grinder. Kraza brought the manuscript with him when he and many other Jewish artists were swept up and taken to Terezin on their way to Hitler's death camps. Under the most trying conditions, the little piece was performed more than fifty times as a morale booster for the camp. It was so successful that the Nazi's actually filmed it to fool the Red Cross about conditions in the camp and the destination of the children.

Brundibar is being produced at the Warehouse on South Rogers. It's the same rough place that the Bloomington Chamber Singers chose for their Anneleis based on diary of another victim of the holocaust, Ann Frank.

In Brundibar two penniless children set out to get milk for their ailing mother. Although the town that they visit is rich with delicious ice cream, rich bakery goods and plenty of milk, they all cost money. The children take a chance on busking, first with a lovely song and then graceful dancing, but they're drowned out by the organ grinding Brundibar. Exhausted they sleep and are visited by a cat, a dog and a sparrow. With their help and the children from the village and the choruses they defeat the organ grinder and there's a victory march.

Acting throughout is very well done and at a high level. Director Gleeson has double cast the show and it's clearly been a great experience for her student actors. The music for Brundibar is charmingly modern. The cast sings it well and the small orchestra does a lovely job of presenting both its spare grace and richness.

Playwright Kushner has added a little play as an opener for the opera and a cautionary tag at its end. The opener is But a Giraffe. As her family dithers over the details of their deportation to Terezin, a difficult and clever little girl has to choose between her giraffe and the manuscript of Brundibar. Both won't fit in the one suitcase she's allowed. Kushner uses the giraffe as a metaphor for the Jews…a unique special animal, but one with the same number of neck bones as all others.

Although Hans Kraza's opera ends on a happy note as the children march in victory over Brundibar Kushner adds a cautionary note. The evil organ grinder reappears and tells us that he's only momentarily defeated and that he and others like him will be back.

Brundibar produced by the Jewish Theatre of Bloomington and Stages Bloomington at the Warehouse 1525 South Rogers plays Nov 10 - 7 pm, Saturday Nov 12  at 2 and 7, and Sunday Nov 13– at 2