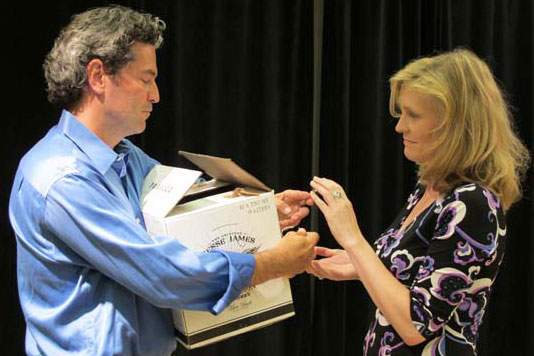 Brooklyn Boy is a bit of a reunion for the two. Kamie and Massery worked together on the Jewish Theatre's production of Arthur Miller's The Price.

The "boy" of the title is actually a middle aged novelist. "Yes," says Kamie. "He's just in the midst of a major career success with a book that's actually at number eleven on the New York Times list. But, at the same time his father is dying of cancer and his wife is suing him for divorce.  It's a tumultuous time in many ways."  Although this sounds like a distinctly bitter situation Kamie quickly adds, "Margulies has a very light touch and there's a good deal of humor in all this."

Richard Massery plays a childhood friend of the author. After years apart the two meet unexpectedly at the Brooklyn hospital where both their father's are dying of cancer. As Massery says, "the two men have a rich history and a few bones to pick with one another as they reconnect. Donald Margulies has a wonderful sense of writing very natural sounding dialog. "Massery like Kamie emphasizes the qualities of humor, resilience and simple humanity in Brooklyn Boy.