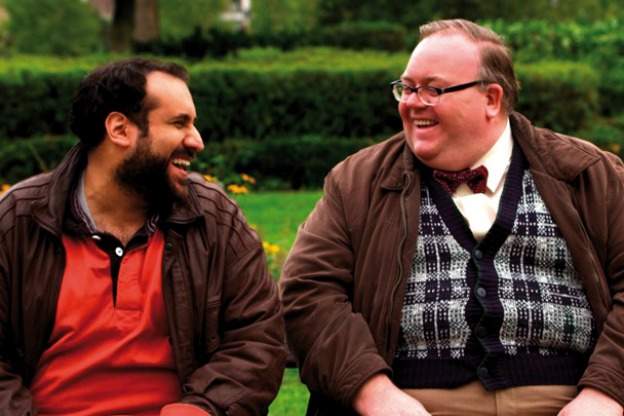 Since 2003, Bloomington's Pride Film Festival has been spotlighting films that explore LGBT themes.  This year, the festival is hosting British filmmaker Jake Graf, whose film Chance will be screened Saturday night.  Graf, the first international filmmaker to be brought in for the festival, may be known to Pride audiences from his role in the film Brace, screened last year.

KALE WILK: Can you tell me a little bit about your film Chance?

JAKE GRAF: I wanted to basically make a film that was not the typical gay narrative with hot, nubile, young men falling in love at a young age or coming out or that sort of story. I wanted to portray characters that maybe aren't often portrayed on screen, how after the age of 30 you're sort of kind of on the gay scene particularlyon the scrap heap. I thought it was quite an interesting idea to have these two characters meet and kind of find each and find love later on in life. So I thought that that would be an unusual story.

And strangely enough it really has resonated with audiences across the world. We've had feedback from everywhere from Lebanon to Afghanistan to Holland to all across the statespeople just saying that they'd never seen this story told before on screen. They'd seen themselves represented for the first time. It seems to have sort of spoken to people, which is great.

KW: Are there messages you want to send to certain people in the work that you do?

When people contact me and say 'you've helped me' or that it's changed their perception, I don't think you can really ask for more than that. That's kind of the ultimate accolade for me.

JG: I've always wanted to make films with a message. Whenever I watch a movie and there's no kind of meaning (which is why I can't watch action films; just for me there's no point); unless you're left at the end thinking ‘Oh, wow, I'd never thought about that before,' or ‘the message of that movie is this.'

You know, when we screened ‘Brace,' in San Francisco at [the film festival] Frameline, a man came up to me a 53-year old guyafterwards and said, ‘One of my best friends transitioned years ago and we haven't spoken in about ten years. Having watched your film I actually understand a little more of what they went through and I'm going to go home and I'm actually going to give him a call now because I'm finally realizing that I behaved quite badly.'

So I mean that for me, when I get people contacting me and saying ‘you've helped me and I've seen myself' or people saying that it's changed their perception of something, I mean I don't think you can really ask for more than that. That's kind of the ultimate accolade for me.

KW: What kind of media presence are you trying to establish for yourself right now?

JG: I'm well aware that in the last 18 months because of Laverne Cox, because of someone, say Caitlyn Jenner, because there's just been this massive trans explosion obviously anyone trans who was already semi-in the media has now been afforded the luxury, well...we're all kind of riding that wave to, for the first time in our lives I guess, make the most of being trans. And I guess you get to draw some kind of positive out of being trans as opposed to having it hold us back.

So for me I am Jake Graf, writer/director/occasional actor, and the fact that I'm trans, obviously I'm not going to negate that, but I don't think it's what defines me but it certainly at this point isn't hurting.

KW: Do you like being included in these particular niche festivals? Do you see these festivals as more of a stepping stone to get to a more general audience? How would you describe that?

JG: Obviously it's great to get to a bigger audience. Last year we were lucky with Chance that the Macon, Georgia Film Festival took us and in London the East End Festival took us, and those are very mainstream festivals.

I guess there does become a point where it almost feels not lazy, but it feels safe to be making queer movies and putting them out on the queer circuit because obviously there is a bit of a dearth of good queer filmmaking. But then there is this sort of hurdle of how do you then cross over to the mainstream. Because when you're making mainstream things there's obviously a huge, much larger pool of competition that you're up against. And obviously a lot of these film festivals won't necessarily be open to queer content.

So it's kind of a double-edged sword: you go for the queer and you know you're going to get accepted or you aim a bit higher and then possibly don't get accepted or you kind of move away from the whole queer filmmaking completely. With all those stories I think there's so many queer stories to tell that to kind of turn my back on that would be…I'd just feel like a bit of a traitor. So the long and short answer is I think queer film festivals are great and I'd certainly never, ever turn my back on them.