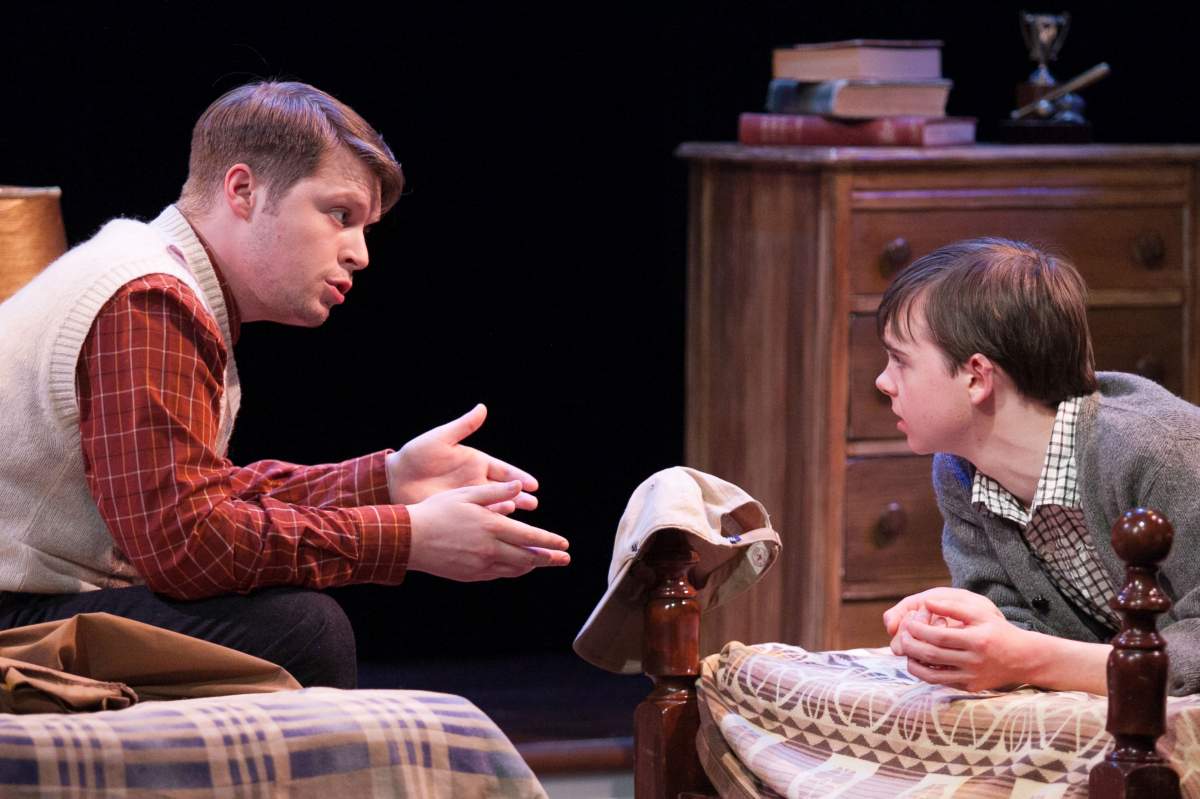 Most of the laughter comes from the Jerome family's irrepressible son. Award winning Bloomington North actor Connor Starks makes his Cardinal debut playing Eugene. Starks was very funny and a bit touching as the engaging young Neil Simon. Eugene is caught in the …Memoirs… on the edge of puberty.

Pitching for the Yankees, catching a glimpse of a naked girl or becoming a famous writer are all pretty much equally attractive to this energetic young man. Providing both a model, a few of the laughs and a cautionary tale with some tears is Eugene's older brother Stanley played with restraint and grace by Ethan Philbeck.

Elaine Rivkin is Eugene and Stanley's mother Kate Jerome. Although she's sometimes overwhelmed, Kate is smart about the family. She's witty and more than a match for the wise cracking Eugene. She's deeply grounded and compassionate. In Rivkin's hands Kate's definitely a woman of valor.

Cardinal and Bloomington veteran Mike Price plays Jack Jerome the overworked and much put upon father of the boys. Playwright Simon and actor Price craft a character that holds very much to personal and political ethical values with a bit of wisdom and even humor.

In addition to this four in the already crowded Jerome apartment, there is another family, an aunt and two nieces who add a good deal of strain and spice to the household. Aunt Blanche, a sympathetic Susan Ellenwood, is the widow of Jack's brother. Her daughters are the high school aged aspiring dancer Nora, Ashley Dillard, and her younger sister Laurie, a heart flutter afflicted studious sort. Joelle Jackson and Eleanor Lloyd alternate in the role of Laurie.

Cardinal founder and director Randy White keeps the scenes and the action well focused as the play sprawls across Lauren Helpern's huge and lovingly detailed set. Although they are muted the promised tears and joy do come. The strains on the extended family are real and they all take place in the shadow of the coming conflict in Europe, but it's the promised laughs from Connor Starks as the young Eugene and the rich drama and the depth of the characters that make this a memorable play and production.

You can find this review and an interview with Connor Starks on our web site at WFIU dot ORG/arts.