The Unresisted Rise Of Arturo UI 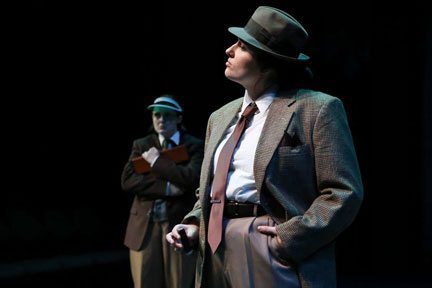 Bertolt Brecht's The Resistible Rise of Arturo UI at IU's Wells-Metz Theatre is an allegory loosely based on the rise to power of Adolph Hitler. I'm George Walker for WFIU Art.

The arts, especially literature have been waging a battle over the issues of education and inspiration for as long as serious thinkers have thought about it.  Socrates student Plato wanted to banish the poets altogether from Republic.  Bertolt Brecht struggled again and again with a balance between attracting and educating an audience. He wanted them to come and he wanted them to stay at a distance where their minds were more involved than their emotions.

Director Liam Castellan with a thoughtfully chosen and skilled cast have embraced the fable of Arturo Ui's rise to control of cauliflower in the gangland Chicago of the early 40s. For a start, Castellan decided on a largely female cast for the mostly male roles. A graceful Glynnis Kunkel-Ruiz is the homicidal Arturo with Elise Chase as her gun totting consigliare. Eleanor Sobczyk is the murderous florist Givola and Katie Swaney, looking a bit like a young James Cagney, is Clark the leader of the cauliflower cartel.  There are two males. Nathaniel Kohlmeier appears as a wolfish, hat loving killer and James Greenwood is a machine gun totting singer.

The Resistible Rise of Arturo Ui begins with a directly artificial appeal to the audience. A tuxedo's Courtney Reid Harris jumps to a riser, pulls down a microphone and in ringside fight style introduces the show. Her artifice includes presenting the whole introduction in mock Shakespearean pentameter. By the way a practically unrecognizable Harris appears later as a drunken gang moll and still later as a crusading newspaper editor. Many times during the evening Brecht will have his characters' humorous and serious moments couched in stiffly delivered poetics to keep us off balance and thinking.

Part of Arturo's plans include the compromising of a prominent figure, gouty Old Dogsborugh played by a usually more agile Athena Kopulus with her echoing son May McQueen. They lure him with stocks and a position that eventually leaves him a sad powerless, defeated figurehead.

In one of the scenes played for laughs, Arturo has hired a drunken actor to help him class up his act. Mia Siffin was very funny as she guided Arturo through walking, sitting and a recitation of Mark Antony's funeral oration from Julius Caesar. I was sitting across from a quartet of IU actors and they were laughing hard.

So the casting and the language did work to keep us at a distance, to keep us from Brecht's dreaded empathy, or identifying with the characters. And there were other factors as well. The Resistible Rise of Arturo Ui is a blood bath. Those resisting the rise to power have their businesses burned. Witnesses are killed. Judges are threatened into submission. A thoughtful rebellion from inside Ui's organization by Roma and Clark is wiped out by Giri and Givola.

Frankly, it seemed as if we might be heading for a happy ending with the efforts of a crusading newspaper editor from Cicero and his staunch supporting wife, Carina Lastimosa.  But he's assassinated and after a bitter extended harangue she is beaten down into kowtowing.

Arturo and the remains of his close followers have succeeded. He's the king of cauliflower in Chicago and he's taken over Cicero. In a  wildly incoherent, but darkly threatening speech he outlines big plans for the vegetable markets in other major cities.

The evening's MC returns to center stage pulls down the microphone and in an echoing stadium speech reminds us that was has happened is likely to happen again.

The IU theatre's The Resistible Rise of Arturo Ui by Bertolt Brecht is directed by Liam Castellan. Scenic and projection design is by Jennie Fisher. Costume design is by Elizabeth Anne Davis. Lighting is by Qi'er Luo with sound design by Sheumais McHenry.