Breaking The Silence On Focal Dystonia 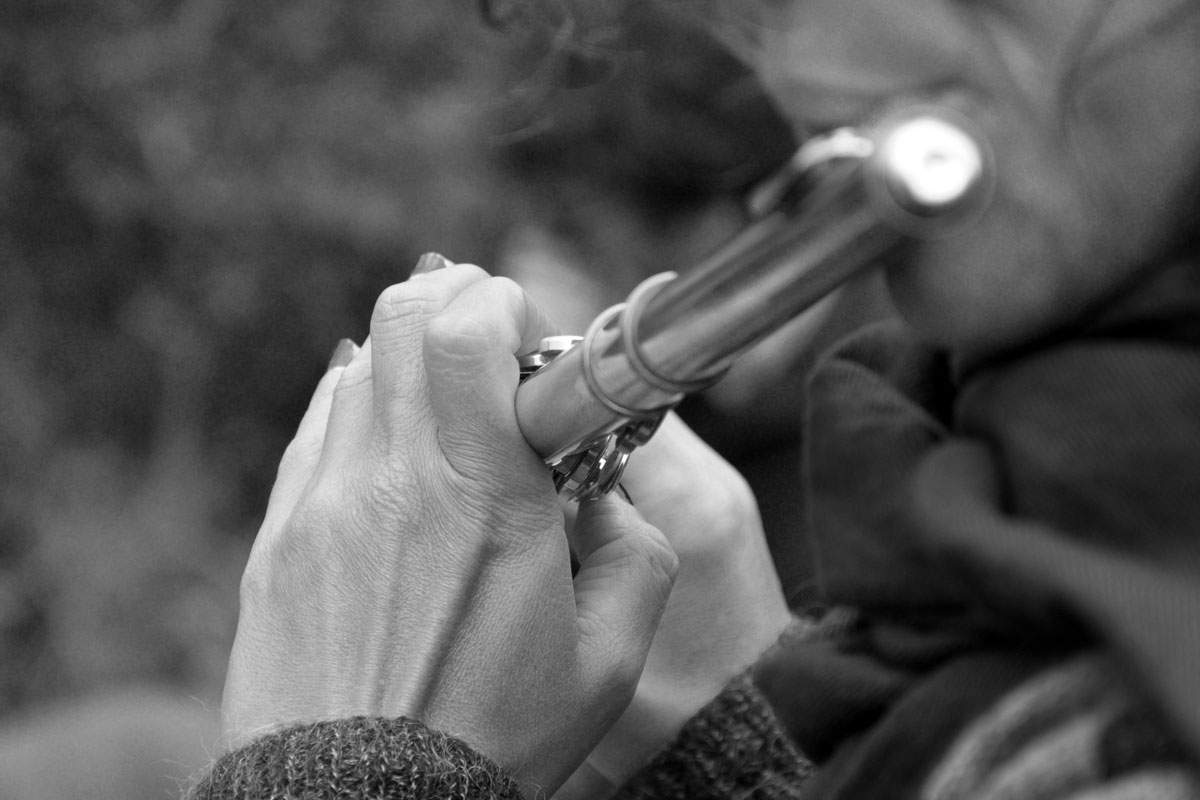 There are some topics you know to not talk about. On a first date, let's say, traditionally you stay away from religion and politics. If you're a musician, there's a different taboo topic injury.

"If you start talking too much about that, they might be thinking, â€˜Oh, maybe I'm injured,'" says Janis Stockhouse, director of bands at Bloomington High School North.

"Musicians, they don't want to hear about this, 'don't tell me that this could be happening,' because all of a sudden they start imagining things," says Dr. Peter Iltis,Â Professor of Kinesiology at Gordon College.

Let's Talk About It

When flute player Joanna White noticed a problem with her playing, she realized she was on her own.

"The more I started looking into focal dystonia, I found out that people don't really talk about it with good reason," she says.Â Focal dystonia is a neurological condition that causes involuntary muscular contractions. "They don't want to have people staring at them wondering if they're going to be able to play their next notes."

White is a professor of flute at Central Michigan University. Her troubles started with a curious quiver in her lip, after some especially strenuous playing.

You have to realize that forty years ago, this was unknown and no one talked about dystonia in musicians. There were no cases reported.

After a while, everything about her playing was uncertain, from the shake in her lip to uncontrollable performance anxiety. She was eventually diagnosed with focal dystonia in 2013.

At first, she kept quiet about her condition. "But I started realizing that if I wanted to get help, I needed to try to find people who knew something about it."

So, she started asking around.

"Dystonia is probably the most urgent problem that we face in terms of health care of the instrumental performer," says Dr. Richard Lederman, a neurologist at the Cleveland Clinic. He works with musicians like White all the time.

Another reason why we don't talk about focal dystonia is because we just don't know much about it.

"You have to realize that forty years ago, this was unknown and no one talked about dystonia in musicians. There were no cases reported."

White and others are now starting to speak up about their struggles with dystonia.

There's a community of researchers, teachers and therapists who are trying to learn more about the condition and develop ways to work around it.

Iltis is researching dystonia in horn players. His team is collecting MRI data showing what's happening inside their mouths. As their control group, they recruited horn players from the Berlin Philharmonic.

The participants performed a series of exercises on a special horn made for the MRI chamber.

Let's get students when they're young, let's teach them proper technique and let's not allow them to take on these non-effective patterns.

Researchers noticed subtle differences in how the musicians played their instruments the techniques they used to moved from low to high notes, for instance. The control group changed the positions of their tongues inside their mouths to help reach the high notes. Imagine going from AWW to EEE.

"It appears as though the dystonia people don't do this tongue movement," says Iltis. "So how do you get the high notes?" Some used extra force with their outer facial muscles.

This is not to say that players using this technique will get focal dystonia. Not at all. Tension, overuse and repetitive motions are all likely pieces of the dystonia puzzle, but Iltis and Lederman both emphasize that there is something else going on here a genetic predisposition perhaps. They don't really know.

As they continue to learn more, Iltis says it's important to bring music educators into the conversation.

"Let's get students when they're young, let's teach them proper technique and let's not allow them to take on these non-effective patterns," he says.

When I visited Stockhouse and the Bloomington High School North marching band last fall, they were preparing for a competition.

They take anywhere from 15 to 45 minutes to warm up their lip muscles before beginning rehearsal.

"I try to model by how we rehearse, how we warm-up. That's how you prevent injury," she says.

White, on the other hand, plans to speak with her students and the larger flute community about her focal dystonia. She wants to encourage open dialog about a topic that was once off-limits.

As for her playing, "I'm still trying to make myself a program where I can keep getting better and better."