Bobo Books: A Salute To The Sustaining Power Of Poetry 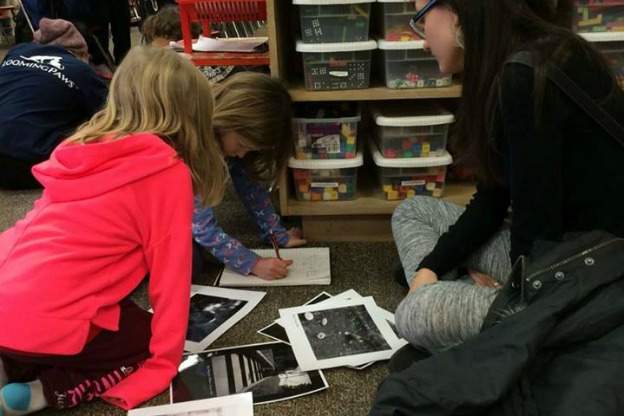 "For a lot of my students, there's been someone who told them that the way they read a particular poem was wrong. That they connected to a poem and someone else told them, 'That's not what it means.' And it crushed that connection that they felt."

Dr. Emily Bobo is a Bloomington-based poetry and fiction writer who has garnered numerous distinctions in her field, from two nominations for the Pushcart Prize, to the President's Award for Excellence in Instruction at Ivy Tech Community College, where she teaches English. Since 2009, Bobo has helmed a service learning project that offers free, after-school poetry workshops. This year, that program, which is called Art into Poetry, has produced the first in a series of books-the profits from which will feed hungry children.

Bobo Books: 1.1.1Â brings together the poems written by kindergarten through second grade students at Rogers Elementary, with those written by their teachers and by seniors at First Presbyterian church, with the pictures of beaches, chickens, and merry-go-rounds that inspired them. The black and white photographs were made by Charity Heggestad, Bobo's lifelong friend, who runs the Boulder, Colorado-based arts philanthropy The Joy of Film. Â The profit from each book sold will feed one child in the Monroe County Community School Corporation's Reduced Lunch program for one week.

Â "I wanted to find some way of not just doing something with intrinsic value but also something that was useful and practical."

The value of feeding a hungry child is indisputable, which Ivy Tech has acknowledgedÂ Â in givingÂ Bobo theÂ 2016 Excellence in Service Learning Award. The value of teaching children to write poetry, on the other hand, is still up for debate in some circles. Â "You can't feed someone with a poem, it's true," Bobo concedes, "but as soon as we have one of those big life moments when we're mourning the death of a loved one or weighing the value of a new life Â and upheaving all of your set systems, that the moment that we need poetry."

Listen to the full conversation with Bobo, and hear theÂ children reading their poems, above.