Bloomington and the Vinyl Record Renaissance 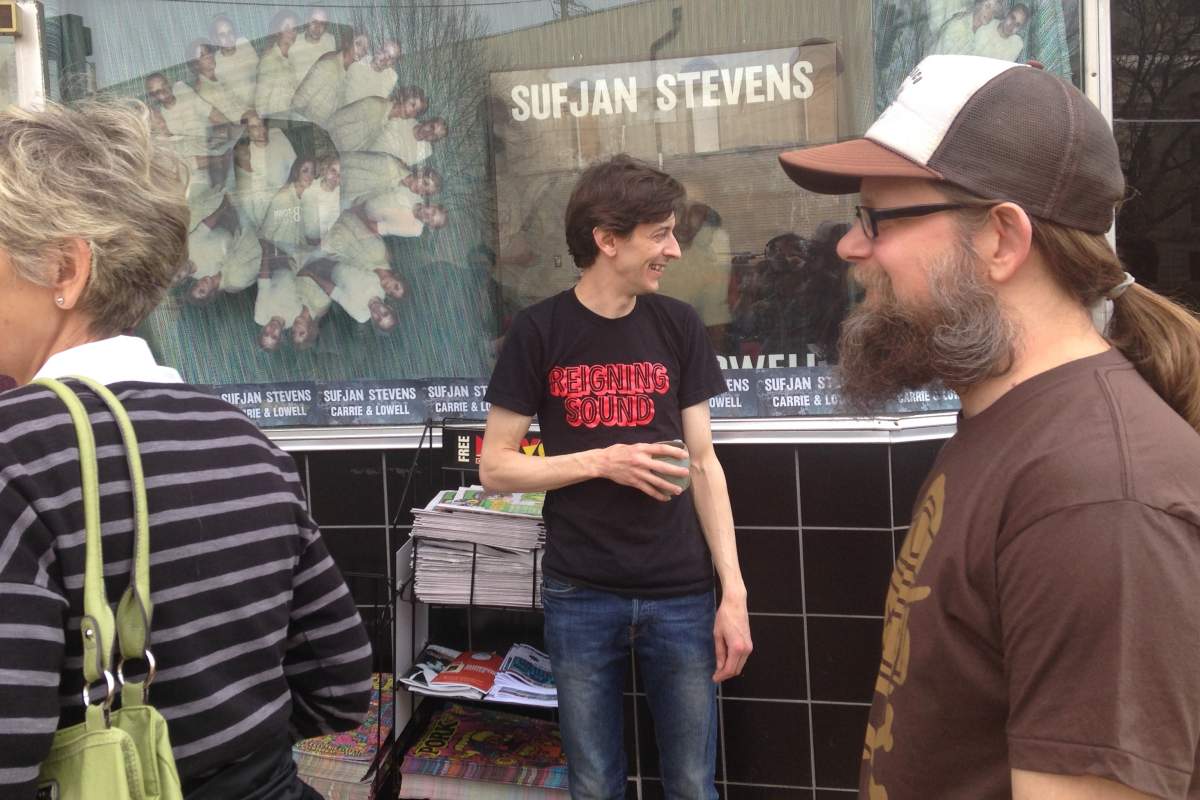 At about 10:00 in the morning on a Saturday in April, an hour and a half before the doors open at Bloomington's Landlocked Music, the line of people waiting to go inside is already stretching around the corner. It's Record Store Day at this local record store, and thousands of others like it around the country.

Nick Palasz, a sophomore at Indiana University, is first in line. He's been camped out overnight since 11:45 p.m. Nick is here for the same reason as most in line: to get his hands on one of the dozens of new and special records being released today-and only today.

These releases include reissues of older and out-of-print records, first time vinyl issues of records that may have been released only on CD, and new records of either new or previously unreleased music.

But ultimately today, and this event, is a day to celebrate the store and what it means to the community. As the co-owner of Landlocked Music Jason Nickey explains, "it is an opportunity to have a party and have fun. We just try to have a good time."

There are DJs inside the store, coffee and donuts for the early risers provided by Uel Zing Coffee Lab and Cresent Donut, and the local group the Jefferson Street Parade Band is entertaining the people waiting in line with some New Orleans dixieland jazz.

It seems that Landlocked Music and record stores around the country do have a lot to celebrate these days. As digital music sales keep outpacing physical music sales, one of the bright spots in the music industry is the revival of the once-dead vinyl record. Since 2007, vinyl record sales have been steadily increasing. That year, less than one million vinyl records were sold in the U.S. And last year, that number was over 9 million, with the majority sold at independent record stores.

What is drawing listeners back to the vinyl record? There's a certain romance to it, for one. For the people were waiting outside Landlocked, the main appeal seems to be the physical nature of playing and listening to a vinyl record, at least compared with the almost detached ease people listen to digital music.

Eric Ford is a customer who started his day at 8:00 a.m. shopping for records at Tracks, a store a few blocks away. He said that when listening to a vinyl record, "you have to pay more attention. It's a process that requires more maintenance. You can't just kind of put on a computer or a CD and forget about it."

The popularity of an event like Record Store Day has certainly helped raise the profile of stores like Landlocked to new customers. Nickey says it's important for the store as an outreach tool. "It does a lot for us intangibly. It brings a lot of people in, it exposes us to people who aren't regulars, and it's sort of an opportunity to showcase ourselves a little bit," he said.

From a business standpoint, however, Nickey said the profitability of Record Store Day is not as high as one might expect. Although the store does about a month's worth of business concentrated in one day, Nickey also has to spend a large amount of money stocking all the new releases.

The increasing popularity of Record Store Day, the international celebration that began in 2007, certainly contributes to the recent vinyl renaissance nationwide. But for a town like Bloomington, interest in vinyl records is really nothing new.

"Bloomington's always been a community that supported vinyl records," Nickey says. He helped open Landlocked in 2006, and has been working at record stores in Bloomington since 1996. "Every store that I've worked at, vinyl was a significant portion of our business. I think it's a testament to Bloomington being sort of ahead of things in a lot of ways. Or way behind things. Or both."

Record stores, as Nickey argues, are vital elements of an artistic community. Though, it's not always about what they bring to those communities, but rather what they represent, and what their presence says about that community's vitality

"They're sort of indicators of the cultural health of a town," Nickey says. "They're the frogs in the pond. I can't think of a city that has a good arts scene that doesn't have a good record store."

Madness Inside the Store

Once the doors open at Landlocked, the madness begins. People pack like sardines in the store, digging through the crates to locate that one special record that brought them here in the first place.

After the madness subsides, Nick Palasz, the intrepid first customer, walks out of the store with his treasures. He managed to find the album he was looking for, "Deja Entendu" a reissue of an album by the band Brand New, along with records by Sly and the Family Stone and John Butler.

Not only was this adventure a time commitment for him, but Palasz also donated plasma to get the extra cash in order to buy his records. "It was all worth it though," he said, while laughing.

He walked away to spend the rest of that sunny Saturday listening to his records.