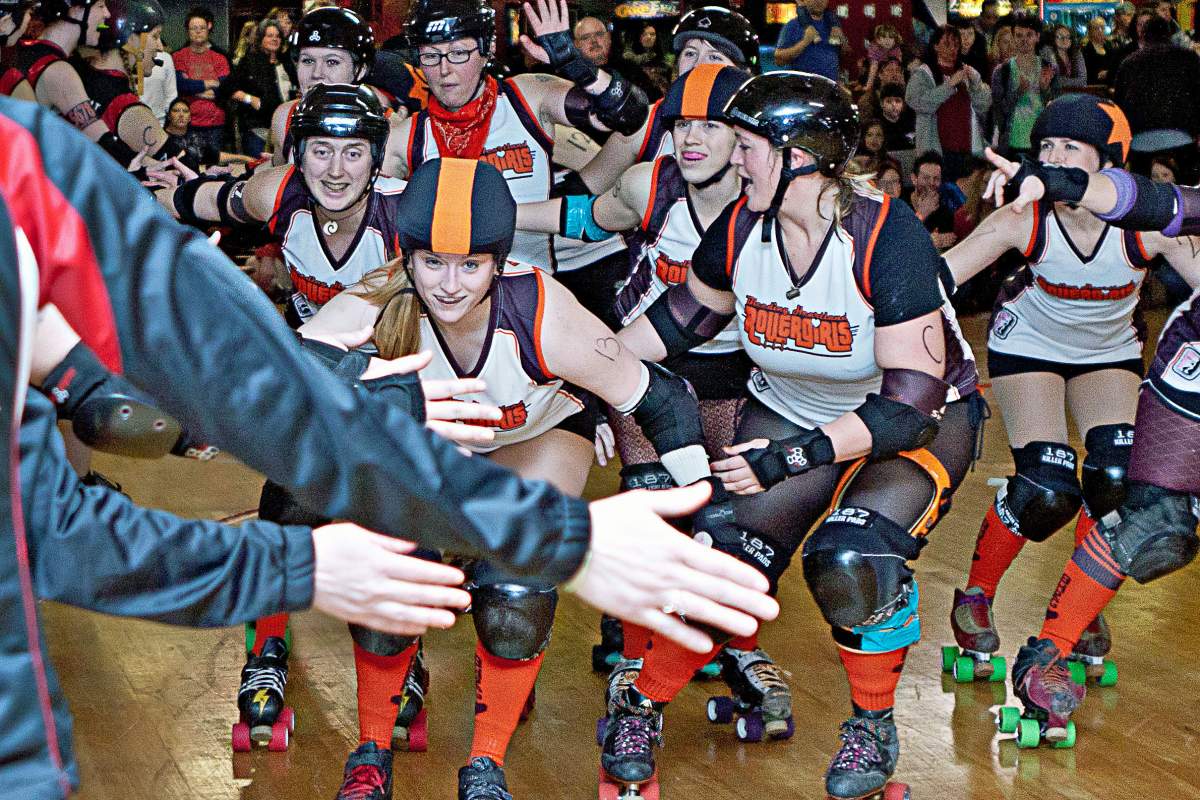 When roller derby skater Tyler Ferguson was a child in the 1970s, she says there were no women's sports. She knew she wanted to be an athlete, but without professional women's sports she felt lost.

"When I had to imagine myself as a professional athlete, I actually played make-believe as a kid, and I had to pretend that I was a guy so that I could identify with that thing I thought I was supposed to be," Ferguson says.

She played soccer for many years, although not professionally. Then several years ago she discovered roller derby. Finally, she says, "I'm doing the thing that I know I want to do, and that's playing a game in front of a ton of adoring fans. That's what I always dreamed of doing and I'm living my dream."

Because it's so new, roller derby leagues and the Women's Flat Track Derby Association (WFTDA) are working hard to write rules and regulations to cement derby's status as a legitimate sport.

But as the rules are written into WFTDA policy, certain teams, including BHRG, worry some players may not get the chance to play the sport in national competition.

What It Means For A Girl

In early 2012, WFTDA adopted a gender policy that has been controversial for the way it defines Female:

Living as a woman and having sex hormones that are within the medically acceptable range for a female.

Transgender or Intersex athletes who meet the definition of Female, as defined herein, are eligible to compete provided that, upon request, the athlete can produce a signed original statement, on office letterhead, from the athlete's attending healthcare provider.

Casey McGrath, who goes by Bombshell Shock on the roller derby track, says, "Our policy at BHRG is that we are a women's sport and if you feel like you fit in the category of playing a women's sport, then you're accepted to play in our league."

However, because they are a WFTDA team, in order to play in sanctioned competition, their A-team must abide by the national association's policy.

Olympics On The Horizon?

Juliana Gonzalez, Executive Director of WFTDA, says that while the charter teams who compete in WFTDA-sanctioned competitions must conform to their gender policy, WFTDA does not mandate gender definitions for the other skaters in the league, the owners or the management.

Gonzalez says the policy was initially put in place to help leagues avoid the "unnecessary judgment, accusation, and closeting of athletes that do not immediately fit gender norms." The goal was uniformity: some teams had a less inclusive definition of Female than others.

Another goal of the policy was to adhere more closely to the gender guidelines of the International Olympic Committee. According to Gonzalez, WFTDA reviewed the IOC guidelines but ultimately adopted a "less restrictive" policy.

There is hope that one day roller derby can be an Olympic sport, but the guidelines would have to be re-written once again for the Olympic team if that were to happen.

While discussions about WFTDA's gender policy were taking place, BHRG put out a competing gender policy. The national association and charter roller derby teams were able to vote on the whether to adopt either the Bleeding Heartland gender definition or the one put forward by WFTDA.

Although the Bleeding Heartland gender policy was not ultimately adopted, McGrath says, "I don't think we've heard the end of the WFTDA policy on gender yet."

Although many of the referees and coaches are men, the majority of roller derby coaches and managers are women. This is partly due to a league requirement that two-thirds of a league's management be comprised of skaters and that at least 51 percent of its owners be skaters-who are by definition women.

Ferguson, who goes by Kaka Caliente on the track, says that men might be a visible presence on game day, but that's only because many of the women who get involved in derby end up wanting to skate.

"That's why there are no women referees, and the same is true for a lot of women coaches," says Ferguson. "They might think thatâ€¦they're not about the athleticism, so they want to come in from a support angle. But it gets you. It just grabs you and tugs you and pulls you in, and you wind up skating."

Democracy On the Track

Although fans may see an all-male coaching staff on game day,Â McGrath points out, "There's a head of athletics who actually sits above all the coaches and captains, and there are two skater coaches who are involved in the training program and lead practices as well," all of whom identify as women.

McGrath reiterates Gonzalez's assessment that as a growing sport, the leagues will need to revisit the gender policy again in the future.

When that happens, Gonzalez and WFTDA will be open to it, because as she says, "WFTDA, uniquely, not only allows the input of the athletes but insists on a democratic vote to adopt such a policy."