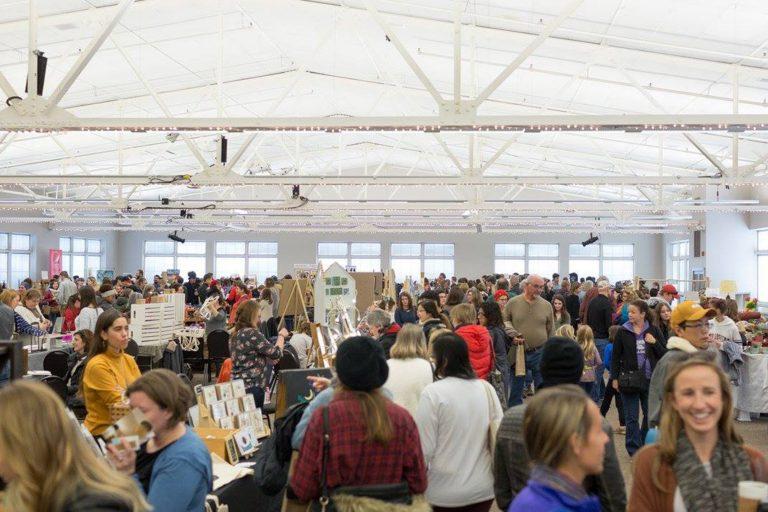 The arts are a big deal in Bloomington. From the galleries to the performance spaces to the looming presence of the Jacobs School of Music, art and the community are woven tightly together.

But just under the surface is an even more tightly knit community of craftspeople and artisans making a living (or even just some money on the side) expressing their creativity through handmade goods.

That community sees its big showcase twice a year at the Bloomington Handmade Market, a sprawling exchange of art, clothes and all kinds of other wares.

Saturday's Holiday Market isn't just the place for proactive Christmas shoppers; it marks the milestone of the Handmade Market's tenth year in operation.

Co-organizer Talia Halliday says since its inaugural market in winter 2009, the event has been built on "young artists taking traditional crafts and making them their own: things like cross-stitch or needlepoint, or weaving or crocheting or knitting, and putting a contemporary spin on it."

Halliday has been planning the market since 2012 alongside Chelsea Jones, the jewelry artist behind Tactile Melodies. When Halliday isn't working on the market, she's doing leatherwork or running her downtown shop Gather, which carries works by over 250 local artisans.

"Now, at 10 years old, we're a little more professional. A lot of these people that do the market are making a living – this is their full-time job," Halliday said.

Before Halliday and Jones took the reins, Bloomington Handmade Market was put together by artists Mia Beach, Nicole Wofersberger and Sally Harless.

"I was inspired by the Indieana Handicraft Exchange in Indianapolis and Renegade Craft Fair in Chicago, and I thought Bloomington would be really receptive to a similar show," Harless said. "Seeing other artists all together in the same room is inspiring, and I have definitely evolved so much over the last 10 years because of the amazing community we have, both in person and online."

Harless had to step away from Bloomington Handmade Market in 2014 when she moved to St. Louis. She now devotes her focus to her art brand, Sadly Harmless, but she's thrilled to make the return each year.

"BHM is like a family reunion for many of us," Harless said. "If we live in the same cities we'll get together and make stuff together while talking and having coffee. I have made so many friends just from connecting with people at our craft show booths."

She's not the only one. Dozens of creators come back to Bloomington each spring and winter for the market, like Art 2 the Extreme's Nicole Hanley. Hanley was part of the very first market in 2009, and she says she's only missed two or three when she was pregnant and unable to travel.

"When I first started out selling at shows, I had so many different things I sold: Pottery, scarves, headbands, crayons, purses… It was a hodgepodge," Hanley said, "but I learned that people really want to purchase from a maker that specialized in one or two things that relate. It helps with booth cohesiveness."

Getting to see the artists grow and improve is one reason Halliday keeps coming back to organize the event. Halliday mentioned that Hanley was an elementary school art teacher at the time of the market's inception. Now she works on Art 2 the Extreme full-time, with hopes to open an independent studio in the next year or two.

BHM prides itself on encouraging what it calls "emerging artists," people just getting their feet wet in their craft. The event's Micro Market gives these artists one-on-one time with more seasoned creators for pricing and marketing tips before gifting them some free booth space.

Halliday says Bloomington Handmade Market has made more efforts to be part of the local community. Each spring market is a joint operation with the Limestone Comedy Festival, and they're now supporting Big Brothers Big Sisters and the Persisterhood Initiative, which is giving its proceeds to Moms Demand Action.

For the majority of the artists, Bloomington Handmade Market isn't just another venue to sell their works. It's an opportunity to reconnect with each other.

The Bloomington Handmade Market is this Saturday from 10 a.m. to 4 p.m. For more information, head to their Facebook page.