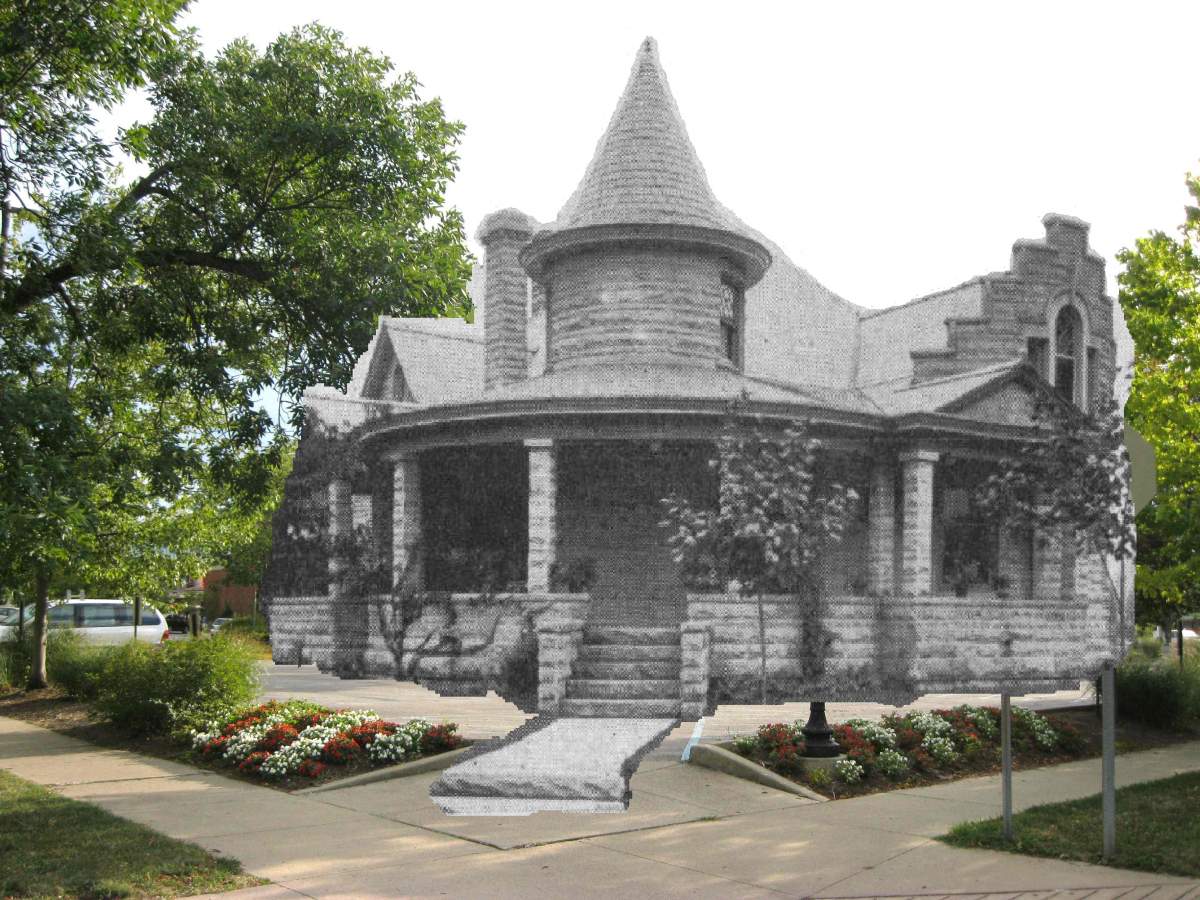 With the boom in popularity of online social networks, some artists are finding that the most convenient way to share their work is on Facebook. Artworks' Rachel Lyon spoke with a small family of artist-historians who have been documenting the city of Bloomington in an unusual way.

Juxtaposing The Past And Present

Bloomington Fading is a family affair. The brainchild of Derek, Jen, and Nick Richie, it's an art project that brings together photography, collage, historic preservation, and Facebook.

On Bloomington Fading's Facebook page, there's a black and white image of the old Arbutus Flats that once stood on a corner on Kirkwood Av. that's now a McDonald's and Chipotle. The building was demolished sometime between 1967 and 1965, and it looks like a completely different street. There's a picture of the Hanson Motor Company at 17th and Walnut, which is now an insurance agency. And there's a side-by-side image of a Circle K on West 5th Street and the house that stood where it stands now, in an image that was taken in the 1930s. Derek explains,

We do two types of pictures. One is you take the old black and white photo of some house that somebody took pictures of back in the '30s or the '20s, or even before that, and you plop it in a modern-day picture. The other way to do it is a side-by-side, where you have one point of view, and then you compare that with the modern picture taken from almost exactly the same spot in exactly the same direction, which can be a real pain to get right. I often have to look down at the picture I'm trying to replicate, you know, time and time and time again, and keep taking that picture until I get it right. People are just wowed, like, 'Wow, that's the same place, a hundred years ago? That's just incredibly... it's so different.'

So where are these pictures coming from? Jen Richie says, "They come from various places. Definitely the Historical Society, they've got a huge amount of pictures that is archived, that we're able to go through, as well as a lot of our friends have shared some of their old family photos and things that they have archived in their own homes. Those are almost our favorite, because it does mean something to the people that are part of Bloomington Fading as well."

Bloomington Fading As A Community

Derek offers a story that exemplifies how much this project means to others. "I don't know if I remember the lady's name, but in one particular case she had two pictures, one of her home when she was just a little girl. It didn't exist anymore, so I was able to go and put her home back in the empty parking lot that it is now. She just was like, 'Wow. That just gives me chills.'

What's ten-year-old Nick's role in this project? "I usually hold the book up for Derek," he says, referring to the book of old photographs Derek uses for reference. "He'll look at it multiple times to make sure he can get the picture exactly right. Sometimes they're a little bit off, but they're usually almost perfect when he gets them done."

The Economics Of A Product-Less Project

The family began a photo album on Facebook to document each image they assembled. It's interesting for a project that's about physical space to exist completely online, because there's no physical object for people to hold in their hands.

"If you're talking about it in an economic sense," Derek muses, "there's no real product, because it is just a place where you can go and enjoy the pictures, and hopefully learn something about the history of this town, and how it's changed so much."

Plans For The Future

But the project, which now lives in cyberspace, will soon be available in real space too. "A lot of this has been done because Monroe County History Center has encouraged us to do it, and use their pictures and archive for free, which has been great," Derek says. "We're going to be doing several projects with them down the road. Preservation Month is coming up, and we'll be kicking off our collection, which will be on display at Monroe County History Center during May. We'll be doing a keynote for Bloomington Restorations Incorporated, which is an organization here in town. That's their whole thing, is saving old houses and preserving them. A lot of interesting relationships have happened because of a project we were just doing for fun."

At the end of the day, fun is what Bloomington Fading is all about. "I like it when we take pictures of mansions," says Nick, and his parents agree, laughing.

For more information about Bloomington Fading, you can 'friend' them on Facebook.