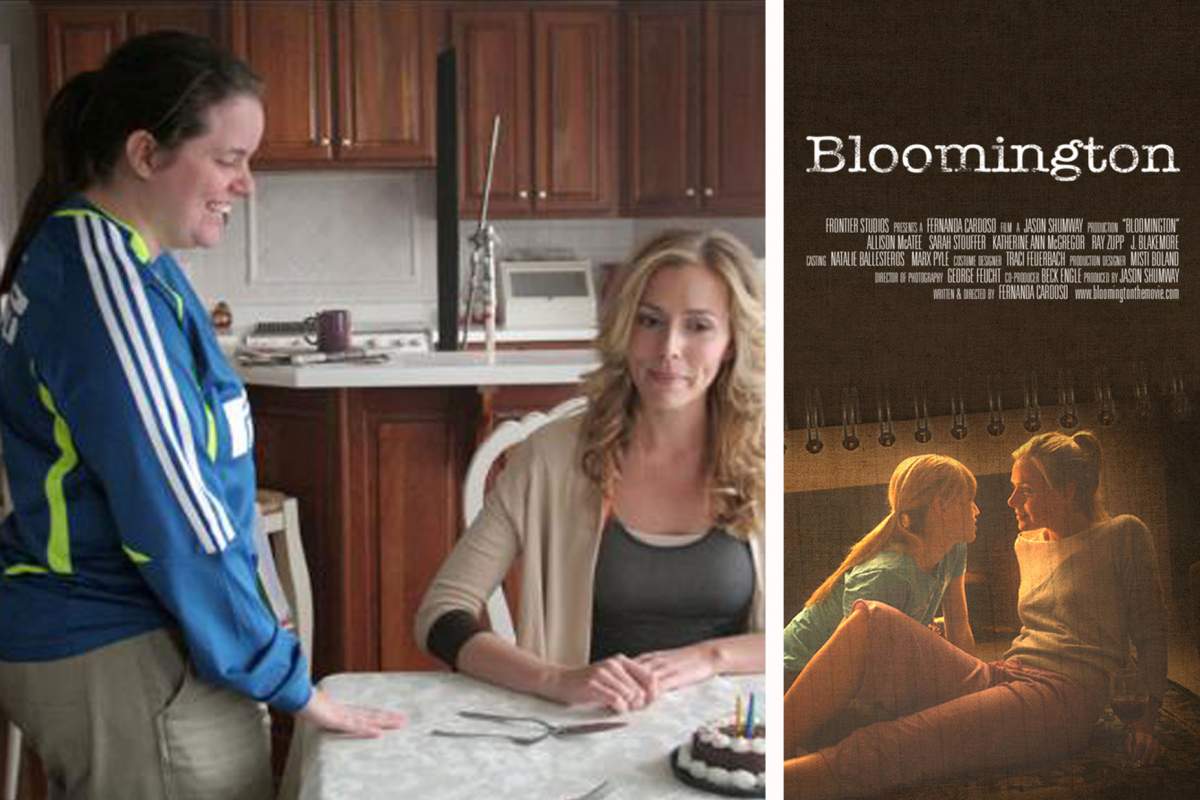 I've been reluctant to post my reaction to Bloomington, Fernando Cardoso's new film about a former child actress who moves to a Medium-Sized Midwestern College Town (our own Bloomington, IN) for a college education and, she hopes, a fresh start.

I've been reluctant because, just as with 8: the Mormon Proposition, the previous film I reviewed for WFIU, I really wanted to like Bloomington. It takes place in my town of residence! It's about lesbians struggling to find love and contentment! It was filmed in Indiana! With a cast made up of several Indiana-based actors!

But Bloomington, alas, is just not a good film. The main characters are depressingly cliched: Jackie Kirk, the child actor-turned-psychology major, just wants a normal life away from the spotlight. She has mommy issues. She deals with paparazzi, even in Bloomington.

Jackie's love interest, Catherine Stark, is the beautiful, blond psychology professor who sleeps with her students, struts around in heels and power skirts, and terrorizes her classes by asking Tough Questions about, for example, which main ideas were covered in the previous class.

And then there's the plot, which slingshots between intensely mundane and tediously revolting. Early in the film, we are offered a glimpse into Jackie's Brand New University Life, which consists of such interesting and exciting activities as moving into a dorm room, registering for classes, and signing up for study groups. I get that the point is to show Jackie's deep interest in embracing a 'normal life,' but for the love of god do we have to see it in real time and in mind-numbing detail?

The entrance of Catherine Stark would be almost a relief from the mundanity, except that her entrance also signals the beginning of the train wreck for Bloomington. See, Jackie has mommy issues. And Catherine Stark looks and acts alarmingly similar to Jackie's mommy. (They look so much alike, in fact, that when I watched the film at last month's Pride Film Festival, my friends and I spent nearly the entire Thanksgiving dinner scene trying to figure out whether Jackie was spending Thanksgiving with her mother or with her girlfriend.) Which is finemommy issues can shape up into an interesting film.

In order to convince us that this relationship is more than just one of convenience for both Jackie and Catherine, the film adds details that appear to have no real significance except to prove that there's any reason whatsoever, any reason at all, that these two would be even remotely attracted to each other.

Jackie is a finalist for an academic scholarship, for which she's required to write an essay. This makes it possible for Catherine to expound, animatedly and with great enthusiasm, on how to use Psychology to persuade people to like you! Catherine's family died in a car crash, leaving her terrified to flyand, by sheer coincidence, Jackie has a pilot's license! I WONDER WHAT IS GOING TO HAPPEN NEXT!

Sigh. I wish I could offer a more glowing review of Bloomington, especially since I don't want you to think that all I do is hate on movies. Butoh! while I'm at it, I have one more bone to pick with this film, which boasts widely of its Indiana ties: Bloomington was not actually filmed in Bloomington.

The film's title, presumably, is intended to underscore the importance of place and to emphasize that it's Jackie's experiences in this one particular place that lead to the personal growth she purportedly exhibits. (Thoughnot to ruin anything for youby the end of the film she's really not much different or better off than she was at the beginning.) This is a film that argues for the importance of place and then proceeds to treat Indiana's towns and college campuses as basically interchangeable.

I sometimes worry that people outside of the immediate vicinity of Bloomington really do see it as basically interchangeable with every other Midwestern college town. This, by the way, is not only a mistake but one that does a deep disservice to the unique, interesting, exciting, and sometimes troubling aspects of life in Bloomington, Indiana.

If I want to hear misguided ideas about how generic, boring, and interchangeable Bloomington is, I can call up any of my friends who live two or more states in either direction from me. I don't need an entire film to hammer the point home.

Jenna McWilliams is a guest movie reviewer for WFIU.Â Visit her website for more reviews.

Statements made by guest reviewers do not necessarily reflect the views of WFIU Public Media or Indiana University.