Having Traveled The World, Artist Travels Through Time 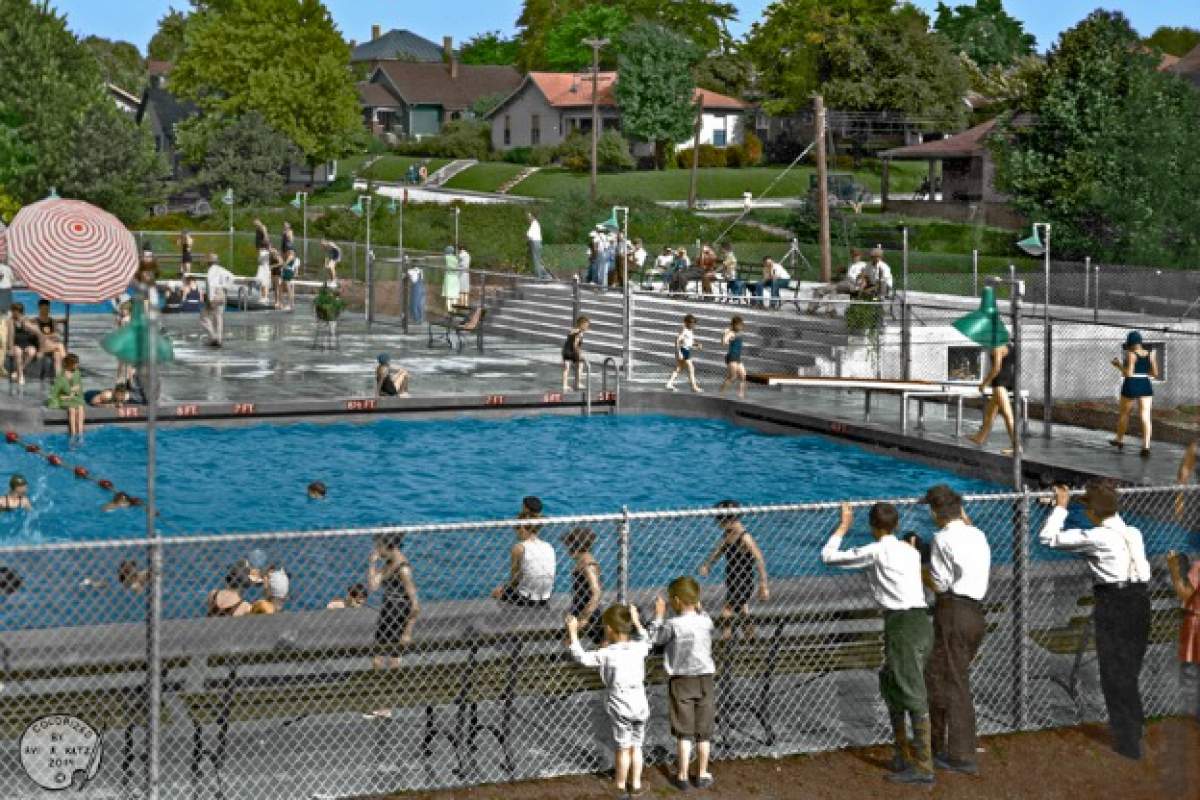 Artist Avi Katz has worked as a commercial and technical illustrator, animator, and storyboarder from Tel Aviv to New York, with clients from Nestlé to the children's TV program Blues Clues.  Along with his commercial projects, since having moved to Bloomington three years ago, he's illustrated a children's bookThe Fish on the Domeand has created a series of lively cityscapes, teeming with commercial signs, power lines, and sidewalk cafés.

For a new project, Katz has extended his investigation of Bloomington's built environment using the historical photo archives of the Mathers Museum and the Monroe County History Center, where a show of his colorized versions of these old photos opens Friday.

When I live in a place I really want to live in it; not be a passerby, just come and go.

In his original work, Katz begins by sketching from observation, then adds color digitallycreating the effect of fall foliage or nighttime as desired. Katz has sketched his way to Bloomington via New York and Vancouver, among other places, as a way of connecting to each new home.

"When I live in a place I really want to live in it," Katz asserts, "not be a passerby, just come and go. So when I came here, the next week I started sketching it, because through sketching you start looking at the place, and not just seeing it. Looking at it."

The habit started in his native Israel, where Katz spent hours in Tel Aviv coffee shops making careful notations of time and place.

"Over there I did something I don't do here," Katz explains, "which was to mention the hour, what I drank, the date, who was the waiter, what table, a whole journal under the actual illustration, which, for me, was, in case in the future there will be a time machine, I could go back and meet myself."

A recent project Katz has undertaken demonstrates just how serious he is about using his artistic skills to travel back in time. Having refined his digital painting technique through his illustration work, Katz is now using it to colorize vintage photographs of Bloomington.

"This is the closest to a time machine you can go, because, when I do little scenes, I get into those little details, like two people talking or things that you wouldn't really look at when you normally look at historical photos."

Diving In To The Past

"This particular shotI don't know whyit really touched a chord in me," Katz admits.  "These three kidsI'm surejust jumped from the diving board and are going for their second round. There are people strolling in nice clothing out in the street, maybe on their Saturday.  And there are people stopping by and looking at their friends inside the pool, or maybe just not having enough money to go in."

Those people who live there now might  have no clue that this paved spot in front of their house was the core of this town, where people went out on Saturdays and had fun.

"This was actually an industrial area first," explains Nancy Hiestand, Program Manager for Historic Preservation for the City of Bloomington.  The site in question was south of Third Street, between Washington and Lincoln, where the Waldron, Hill, and Buskirk Park (formerly Third Street Park) is now located.   After a spoke factory relocated from the site, it was developed as a park during the 1920s. "They wanted a municipal pool because that was the thing to do in those daysit was the Progressive era.  I'm not sure when it was filled in."

Along with colorizing digital scans of the vintage photographs, Katz visits each site to document it.  "There's a parking lot there today, but those houses are still there."  It's especially poignant for Katz to see the same porch that shows up in the historic picture in his contemporary shot.  One of those hidden details that his process uncovers is a couple on a swing on that porch, overlooking the pool.  "Those people who live there now," Katz speculates, "would have no clue that this paved spot in front of their house was the core of this town, where people went out on Saturdays and had fun."

There's something about actively engaging with those photos in Photoshop that causes Katz to insert himself in them. "I feel that I know the place," Katz avers. "It will sound ridiculous, but I can say I kind of lived in Bloomington now, in 1910, in 1942 [and so on].  It's kind of an out-of-body experience of being there."

Color triggers something in your eyes that tells you, 'I'm looking at this,'  not some filtered version of it, in spite of yourself.  It's artifice, but artifice that allows you to imagine reality in a more vivid way.

"You get people hooked on a detail and they can, to some extent, feel they're walking into another time and place," asserts Eric Sandweiss, Carmony Chair of the Indiana University Department of History. Color, Sandweiss elaborates, has the power to get them there automatically

"Color triggers something in your eyes that tells you, 'I'm looking at this,'  not some filtered version of it, in spite of yourself .  It's artifice, but artifice that allows you to imagine reality in a more vivid way."

"I've often thought that people who are receptive to historic preservation are people who can have these empathetic experiences with the visual environment," adds Hiestand. "People who fall in love with old houses have had a kind of out-of-body experience understanding the length of time that the building has been there, and the people who've lived in it, and they find some value in that, in the continuity in the human habitation of a space."