Bloomington Gives Its Blessing To "The Good Catholic" 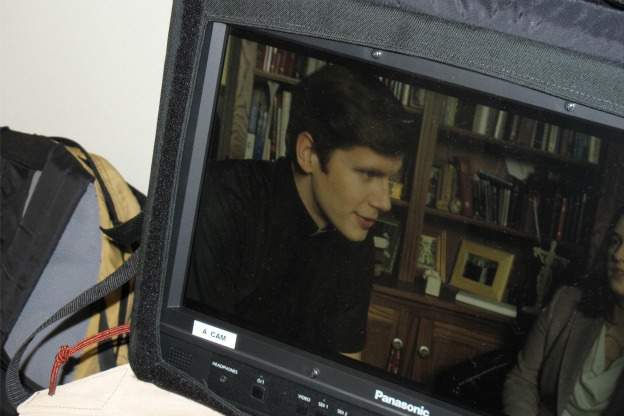 "I grew up in Greencastle, Indiana in the same house," Spicer asserts. "I played basketball. I come from a family of basketball players. It's what we do."

"My family watches religiously Rudy around Thanksgiving time, and Hoosiers, sometime around March Madness and that has happened every single year of my entire life."

Nonetheless, after catching the theatre bug at Indiana University, he got the heck out of Dodge.

We were trying to figure out where we could shoot this movie.  And we kept on coming back to IU.

"I went straight to New York City," Spicer recounts, "which I had never even been to before; and I decided I was going to dedicate my life to the pursuit of acting, even though I'd only been doing it for about six months."

Down to the proverbial fifty bucks in his pocket (adjusted for inflation, it was actually $570), it's the classic tale of the small-town boy from the Midwest starting from nothing to make it on Broadway, and it doesn't disappoint. His first job was at Shakespeare in the Park.  He worked as Anne Hathaway's security guard during Twelfth Night.

In time, though, Spicer actually got on stage with the other actors, alongside Cynthia Nixon in Wit, and in Kenneth Branagh's production of Macbeth. After nine years in New York, Spicer's still in show biz, but, for now, back in the Hoosier State. When it came to producing his first movie, the choice of location was clear.

"We were trying to figure out where we could shoot this movie," Spicer relates.  "And we kept on coming back to IU."

"The IU connection runs deep with us," concurs Graham Sheldon, co-producer of the feature film The Good Catholic, currently being shot in Bloomington. Like Spicer, Sheldon attended IU. His father was a Telecomm prof. And, also like Spicer, Sheldon has made some deep inroads in the entertainment industry.  He's made 15 or 20 documentaries for networks from Vice, to the BBC, to NBC, and the work has taken him around the world.

You're supposed to tell your own story. And if you're writing from experience, then, this is our experience. We're from Indiana.

"I have filmed documentary projects all over planet Earth," Sheldon avers.  "Seriously. Chernobyl, Mongolia, Japan, Geneva, France. I mean the list goes on. And when I was here at Indiana University I wanted to graduate, get out there and tackle all these things. Except, part of me always comes back to this town. I don't know what it is. It sticks with you."

As had the connections Sheldon and Spicer had made in Bloomington. Spicer formed Pigasus Pictures with fellow IU grad John Armstrong, and released a short film written and directed by another alum, Paul Shoulberg. Sufficiently impressed with the short (At Me Or With Me, 2015), Sheldon got on board for The Good Catholic, a romantic comedy about a faith-testing romance between a priest and a nun, based on the true story of how Shoulberg's parents met.  Danny Glover and John C. McGinley are cast in the film's  lead roles.  But that story happened in Lawrence, Kansas, so why not shoot there, or Los Angeles for that matter?

"I knew, making this movie, we were going to need to ask a lot of favors," Spicer admits. "And I knew that if we came back out to Indiana, and specifically Bloomington, that Hoosier hospitality would come into play."

"We just went around and started talking to businesses," Pigasus co-owner Armstrong offers.  "Starting with the Chamber of Commerce.  Just started talking to folks. And people have just opened their arms, and pocketbooks, to help us."

They've been given the green light to film in local venues, from Harmony School to Rose Hill Cemetery.  At Trinity Episcopal Church on Kirkwood Avenue, they've closed the sanctuary to allow for filming, built a makeshift confessional, and disguised the Protestant identity of the church office.

"We just added a few things to make it look a little more Catholic," explains production designer Gordon Strain, another IU alumnus.  "We added a Virgin Mary in one corner and there's a Pope book, things like that,  just little things."

But locals have come through on big things too.

"80% of our investors are Hoosiers," claims Spicer.

The film boasts 15 investors, including executive producer David Anspaugh, director of Rudy and Hoosiers. Financial backing and material support have been key in making this film here, given Indiana's tax code. "We can get a certain level of tax deferment from specific states," Sheldon explains.  "And unfortunately, Indiana is not one of them."

"It's cheaper to make movies in many other states," Armstrong elaborates.  "Any surrounding state would be cheaper because of the tax incentive. But we decided that because we are from Indiana and we spent so much time in Bloomington, through a lot of good will we could probably make the movie at a budget that would allow us to offset that lack of tax incentive. And that's what's happened."

The community has also been a source of filmmaking talent.

"We had maybe 55 people film people apply to work on this project in some way or another, from the local community," Sheldon reports. "These are not people we brought with us, they did not come from New York; these are just film enthusiasts who want to work on a set and bring something to the table."

Now you can take a camera that you've purchased from Best Buy and make something that can be released internationally and make money. In the last five years, technology has been the great equalizer.

Enthusiasm and Hoosier hospitality notwithstanding, it seems as though one might have to reinvent the wheel to make a movie in Indiana, instead of, say, LA or New York.

"Well, there's a secret about filmmaking that studios don't want to admit, necessarily," Sheldon confides.  "The secret is that now you can take a camera that you've purchased from Best Buy and make something that can be released internationally and make money. In the last five years, technology has been the great equalizer. So that if you have the talent you can do it. And the talent is here. Yes, there's talent in Los Angeles. But the talent is here as well, and I would say that it's equal to New York and LA in many, many ways."

Telling Your Own Story

The fact that it's a Midwestern story, Spicer explains, makes shooting here worth the challenges.

"There's a reason why Hoosiers and Rudy are so gooda Midwest story told from the perspective of people from there. Those two movies would have been very different if Angelo had not written them or David had not directed them. Because they come from the soil of the place where the story is set."

"You know, you're supposed to write what you know," shares Armstrong, "and tell your own story.  Tell stories that you want to tell. And if you're writing from experience, then, this is our experience. We're from Indiana."

The first of three films Pigasus Pictures plans to film in Indiana, The Good Catholic is scheduled for release next winter.