A View From The Street: Homeless Artists Share Their World 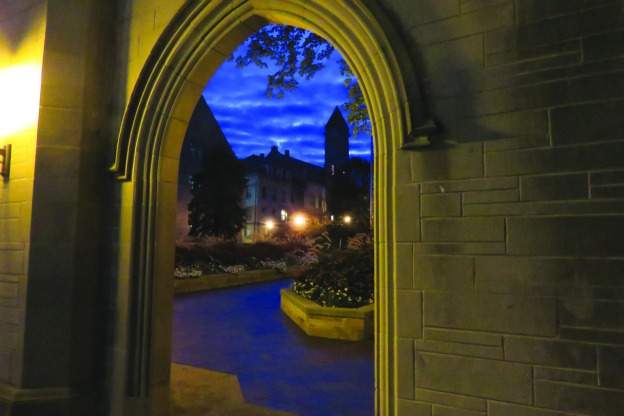 For nearly a decade, Bloom magazine has been, as its tagline says, "celebrating life in Bloomington" in more than a hundred full-color, glossy pages every two months. With its high production values, the magazine represents Bloomington as an affluent, even glamorous burg. While the December 2015 issue is consistent with Bloom's look, its main feature-which at 22 pages is the magazine's longest ever-tells a different story about the city.

AÂ shot Ray Jordan took on the edge of the IU campus, looking east through the Sample Gates, is glorious enough to figure in any issue of Bloom. Taken just before sunrise, the greenish glow of the artificial light on the limestone in the foreground contrasts dramatically with the indigo sky streaked with clouds in the distance. But training his eye on beautiful scenery is not something Jordan's done much of for decades.

Time Out For Beauty

"This is kind of like a reprieve," concedes Jordan, "from the ugliness that you see as well, and that you experience with other homeless people."

The heart and the spirit of each of us is the same. We respond to things that touch us, and I think that that's what these photographs show.

Once an amateur photographer, the 74-year-old Air Force veteran, and former employee of RCA and the US Postal Service has been homeless since 1983.

"It was just kind of weird," Jordan explains; Â "my life just kind of crumbled around me. My wife left me, and she complained to the child protection agency and then they came out and took the kids away. Â And I made some wrong turns, so..."

This time of year, Jordan usually sleeps at the Interfaith Winter Shelter, which rotates among four city churches from November through March. Â Otherwise, he sleeps in his truck. Â Deciding where to park can be tricky, he explains

You can't park in the same spot every night,Â because the neighbors get suspicious. They're afraid of you, because they think you're going to break in and kill themor I don't know what they think. And some of them act like they're scared to death. When I see that, then I move. I just get out of there. But sometimes you don't see that. Sometimes they're hidden behind their blinds, and peeking out, and that sort of stuff.

During the day Jordan often checks in at the Shalom Community Center, a resource center for people experiencing extreme poverty.

"We particularly are known for our work with homelessness," explains ReverendÂ Forrest Gilmour,Â Shalom's executive director. "Although we work with people at all stages of poverty and struggle and challenge. We operate housing programs, case management, offer a lot of emergency services, life essentialsshowers, laundry, meals, that kind of thing."

"Shalom offers a lot of practical things," reiterates Virginia Hall, a street outreach worker for Shalom, "but I believe that real recovery and real rehabilitation of the human being is a spiritual journey, and it's not just food, and shelter."

Â Not On Bread Alone

Which takes us back to Ray Jordan, and his picture in Bloom magazine. It's the culmination of an idea Bloom's editor Malcolm Abrams proposed to Shalom back in the spring and implemented with support from Pictura Gallery. Modeled afterÂ a similar project in Paris, about a dozen of Shalom's clientsand several children living in the New Hope Family Shelterwere outfitted with Canon PowerShot cameras, and trained in their use and mentored artistically by professional photographers John and Peggy Woodcock and Sarah Wilson. The participants were given financial incentives once the cameras were returned and the photos were published in the magazine. Jordan was among those to whom the opportunity was extended.

That is one of the core reasons for this project. I think it brings out the humanness of the photographers in a way that the word 'homeless' does not.

"I don't drink, I don't smoke, I don't drug," Jordan explained. "And I'm sure they were trying to look for people that were responsible, so I would have pulled in through that mode."

The project gave people who are not regularly asked to be relied on the chance to prove their dependability. But Shalom's staffers admit they were leery at first.

"We didn't know what would come out of it," Hall recalls. Â "We had no idea."

"And everybody whoÂ participated," beams Hall, "completed it."

"They did amazing," concurs Gilmour. Â "They did so well. Â All told they took over 5000 photos."

Finishing What You Start...

The gratification that comes with completing a project and receiving approval-and compensation-for doing so was aÂ major benefit of the project. Â "I mean are they all going to become photographers?" Hall inquires, rhetorically. Â "That's not the point. But did it boost them enough maybe to say, 'Hey I can do something. And I can follow through. Maybe I could apply for a job.'"

But maybe there was something specific about taking and sharing photographs that helped elevate their spirits more than finishing any other job would have. I asked Jordan whether it felt good that the magazine wanted to know what the world looked like through hisÂ eyes.

They had a fundraiser at the ballroom at Fountain Square Mall and I got a lot of compliments on this, and people were really nice. It's the best I've been treated for a while.

"Yeah!" Jordan avers, enthusiastically. Â "It really, I can't really explain it, yeah, it felt really good. It was nice to get a camera back in my hands again, you know. They had a fundraiser at the ballroom at Fountain Square Mall and I got a lot of compliments on this, and people were really nice. It's the best I've been treated for a while."

...And FindingÂ Your Voice

The compliments felt good. Â But perhaps even more fundamentally, it's the opportunity to expressÂ oneself and be acknowledged, that matters.

It's really hard to put this in words," Hall elaborates. "And maybe that's the point. Art has a therapeutic component to it. My sister who was mentally ill and was homeless for a period of time found her way to embrace life through her art. Whereas, she couldn't speak her story necessarily. And she was a good artist. She found that she could teach through her art, and did some of that. So I've always been sensitive to non-verbal expressionsmusic, art, all kinds of artand that people find their voice. And so maybe that's what came. People began to find a voice that's not 'I'm homeless.'

"That is one of the reasonsthe core reasonsfor this project," Gilmour adds. "I think it brings out the humanness of the photographers in a way that the word 'homeless' does not."

Beauty strikes all of us," Hall observes. "I can't tell you how many times I'll be walking with somebody and they'll say, "Did you see that?" Or they'll say, "Did you see that sunset last night?" When they say that, I just go, 'Yeah! Wasn't that cool?' You know, because it helps us connect as human beings. The heart and the spirit of each of us is the same. We respond to things that touch us, and I think that that's what these photographs show.

A selection of the photographs taken for this project by Bloomington residents experiencing homelessness will be on view at Pictura Gallery January 8 through February 27, 2016, with an opening reception January 8th from 5-8 pm. The photographers will receive 50 per cent of the proceeds of all sales. Shalom Community Center will receive the other 50 per cent. The photos may also be seen at magbloom.com.