A Black-And-White World in Color: The Cushman Collection 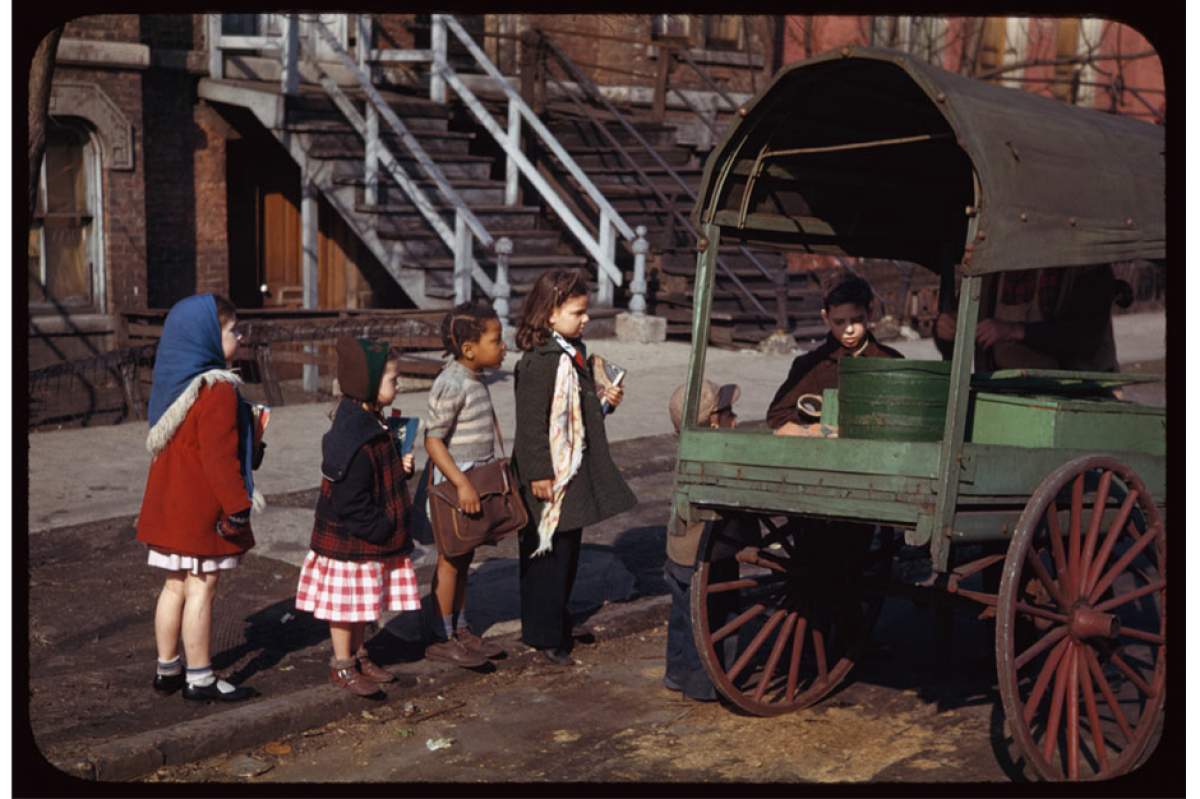 Bradley Cook, the curator of photographs at the Indiana University Archives, once got a strange e-mail from a visitor to the Charles W. Cushman Photograph Collection. "It said something to the effect of, â€˜I just hate your Cushman Collection, because all I do all day at work is browse that darn collection, and I'm not getting any work done.'"

A Photographer's Travels, Made Timeless

Charles W. Cushman was an Indiana native and IU alumnus. He photographed his incessant travels through the U.S. and Europe from the 1930s to the 1960s.

While most other amateur and professional photographers were shooting in black-and-white, Cushman shot his photos in color. And not just any color-he used Kodachrome, the film that National Geographic magazine used exclusively for half a century, and that Paul Simon sang about in his song of the same name.

Whatever the subject-New York City's Fulton Fish Market on a sunny Saturday afternoon in 1941, bathing beauties on a San Francisco beach in the 1940s, Haight Street hippies during the Summer of Love-the vibrant yet subtle Kodachrome draws you in, making you feel like you're right there in the scene. Look at one of the photos, and you'll want to see another, and another. Considering that the online archive consists of 14,500 photos, it's easy to see how browsing them can keep you from your work.

IU Bloomington Professor of History Eric Sandweiss is writing a book about Cushman. He says the color photos helped him to "literally see America in a new light."

"I was looking at pictures of the United States from the 1930s to the 1960s of what were at some level familiar scenes-small towns, scenic landscapes, industrial cities, downtowns, neighborhoods. But because of the fact that they were in this really rich, vivid, realistic, Kodachrome color, they actually looked like unfamiliar images at the same time."

Since the archive went online in 2003, the Cushman photos have been written about in the media, appeared in books and Web sites, and printed on T-shirts, purses, and pillows. People from around the world have seen their relatives in Cushman photos, and requested reprints. One man in Ireland spotted his father in a Cushman photo, driving a horse-drawn cart in Dublin in 1961. In another, an American woman saw the place in Italy where her father, a solder in World War II, proposed to an Italian girl, whom he married.

"A week does not go by that I do not get some kind of request for Cushman images," says Bradley Cook. "Usually it's for publication, other times it's for prints because somebody wants to hang it on their wall."

IU received the collection following Cushman's death in 1972, when his widow Elizabeth donated his photos, camera equipment, and notebooks according to his wishes. The items then lay forgotten at IU in two locations for 27 years. But in 1999, Bradley Cook and Rich Remsberg, who was then at IU's journalism school, simultaneously found the two parts of the collection-Remsberg having rescued a of photos as they were about to be thrown out.

"Old Kodachrome, it just looks like nothing else," says Remsberg. "It's so beautiful."

Now a photo researcher who finds historical images for TV documentaries, Remsberg calls Cushman's use of Kodachrome "a happy marriage between that visual look and the American experience."

"When he's photographing on docks in Baltimore, or horse-drawn peddlers carts around Maxwell Street in Chicago, and you've got this orange brick or the dark skin tones on workers with the brown of the boxcars and the blue of the water-the richness in the Kodachrome, even at the time was outstanding . . . . There's just nothing else like that."

Because of the unique characteristics of the Kodachrome film and processing method, the slides have kept their color saturation remarkably well over the decades. Remsberg notes that had Cushman shot on a less stable stock, such as Agfachrome, their colors would have faded. "You can do things to digitally restore that," he adds, "but it's just not the same as having the original analog Kodachrome color."

A Tool For Procrastinators And Historians

The photographs in the Cushman Collection were digitized by IU's Digital Library Program after it received a $147,000 National Leadership Grant for the project in 2000.

The Cushman site is organized by Year, Subject, Location, and Genre. Click on Location, and you're offered photos from a staggering array of European and Middle Eastern countries. Click on Subject, and you're given such choices as Garage Sales, Gangsters, Gargoyles, Goddesses, Golf Caddies, Graffiti, Gulches, Grocery Stores and Grizzly Bears-and that's just a partial listing of "G."

The addictive nature of the Cushman archive led a fan to issue a notice on his Web site: "PROCRASTINATION WARNING: Do not click this link unless you have at least an hour to burn."

But it's more than the Kodachrome that makes Cushman's photos so valuable to historians and to photo archivists such as Bradley Cook. "The other unique thing about Cushman, in fact one of the most unique things about Cushman's images, are all the notes that he kept."

Cushman took notes on every slide he shot. He included such details as the date, street address, name and profession of the person he was photographing, and the direction he faced when he took the picture. He even invented his own cataloging system. His notes filled twenty-five notebooks dating from 1938 to 1964. They too are available for viewing at the archive site.

Using Cushman's detailed notes, amateur photographers in Chicago and San Francisco have created then-and-now juxtapositions: They'll stand in the exact place where Cushman took a picture and shoot a contemporary view of the same scene.

IU historian Eric Sandweiss is one of those shutterbugs. He takes copies of Cushman photos with him when he travels, and lines up a contemporary shot. He's done it in Cushman's home town of Poseyville, Indiana, as well as in San Francisco, New Orleans, Chicago, and Tuscan, Arizona. The photos show him what's changed in the scene and what's stayed the same, or as he puts it, "continuity and change."

"It's the combination of the two, I suppose, that really intrigues me."

Charles Weever Cushman married into wealth, worked as a financial analyst, and enjoyed the arts. Despite his high lifestyle, he ventured into gritty areas where polite society didn't go, such as the Chicago slums.

Rich Remsberg believes Cushman had an uncommon ability to focus on important aspects of wartime and postwar American life. "He created this visual record of what we now recognize as a very important broadly described social history, in color, with good photographic chops, in a way that nobody else did for an enormous part of the twentieth century."

Interest in the Cushman Collection is likely to increase with the impending publication by a French publisher of a book devoted exclusively to the photos, and with the publication this December of Eric Sandweiss' book on Cushman's life and work.

And from now to the end of September, the IU Photo Archives is exhibiting another facet of Cushman's work: the black-and-white photos that predated his color snapshots. The exhibit, "Cushman's Curiosity," is on the fourth floor of the Herman B Wells Library. It includes Cushman's camera equipment, photo albums, and an application for employment in which he listed every job he ever had.