Cardinal's New Musical: As Organic As The Veggies It Pushes 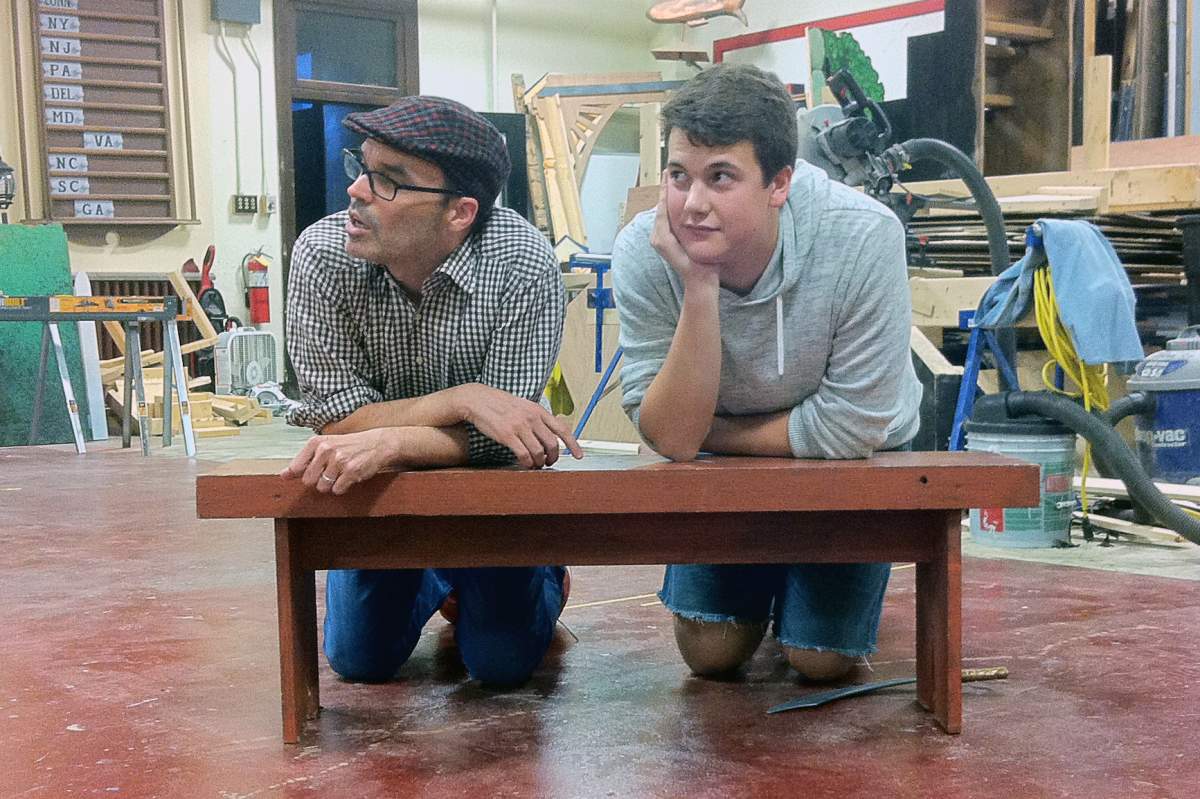 19-year-old Matthew Widenbener is playing Junk Food Jack in the The Birthday Feast. His character loves eating Chocogold (which for Cardinal Stage Company's purposes are Whoppers). He pops a piece of candy in basically every scene.

By the end of the musical, Junk Food Jack has learned the virtues of eating healthy, so he trades in his Chocogold for cherry tomatoes.

But here's a fun fact about Widenbener:

"I actually hate cherry tomatoes and I have to eat two of them every show," he says. "I'm going to have to ask them if they can figure out something else that I can eat."

Randy White is the director of The Birthday Feast. He's not so concerned about Widenbener's aversion to tomatoes. "Actors and eating could be a subject of many books," he says. In fact, White is pretty sure Widenbener will end up liking tomatoes by the end of the show's run.

Cardinal has partnered with Indiana University's Themester for six years. This was the first time they couldn't find an existing children's play or musical to fit the theme. So, White commissioned author Scott Russell Sanders and composer Alex Crowley to write The Birthday Feast.

It's the story of three kids who are on a journey to make the perfect birthday meal for one of their mothers. Along the way, they go to the farmers market, they visit a neighbor's garden and they go on a turkey hunt.

Sanders and Crowley sit in on rehearsals, scripts open and pens ready. The team has made several changes and additions to the musical throughout the rehearsal process. White says that's par for the course.

"A play is an organic thing," he says. "It's not this thing that gets handed down from on high and put on a page. It grows and lives and breaths and finds a life through the actors continuing to work with it and an audience experiencing it."

One of the additions was the song What's In Your Food. They realized they needed a song that illustrates what they mean by "junk food."

Isabella, played by 18-year-old Audrey Deinlein, sings the ingredients on the Chocogold label sodium benzoate, potassium sorbate, calcium carbonate and so on. By the end of that song, Isabella has persuaded Jack to ditch the candy and grab some cherry tomatoes instead.

All plays are essentially looking at the moral ways in which we move through the world and the repercussions of those actions. This play for me is just a slightly more overt packaging of a message.

This is the first time Scott Russell Sanders has written a play, let alone a musical play for children.

"It's a challenge to write a play that's not just about the things that kids automatically like to eat," like chocolate, which was the food of choice in last year's Cardinal production of Willy Wonka And The Chocolate Factory.

"That's pretty easy. You don't need to persuade the kids in the audience that they should like chocolate because they already do," he says.

He knew he wanted to tell a story about food that was educational, but he didn't want to be preachy. One way he thinks he's achieved that is by having the older kids in the musical not the adults teach about healthy eating.

It may seem like The Birthday Feast is heavy on message, but White says that's no different from any other show they put on.

"All plays are essentially looking at the moral ways in which we move through the world and the repercussions of those actions. This play for me is just a slightly more overt packaging of a message," he says.

Someone who didn't get the message? Matthew Widenbener. He says that, even after weeks and weeks of singing about healthy food and even eating it on stage, he will absolutely not develop a taste for cherry tomatoes.