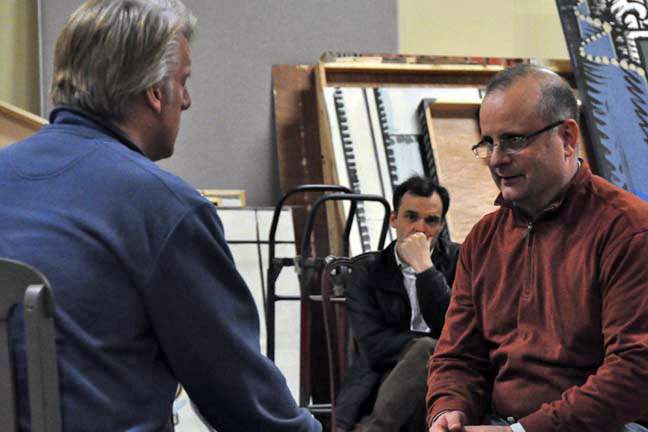 Samuel Shem and Janet Surrey's play Bill W. and Dr. Bob is the moving story of the lives and the meeting of two men that led to the creation of Alcoholics Anonymous.

Christopher Vettel plays Bill W., an educated Wall Streeter, a salesman who "could talk a dog off a meat wagon," and an alcoholic. Paul Hanson is Dr. Bob, a surgeon with a successful practice, who's also an alcoholic. As we learn, both men have tried to beat the disease. They've dried out in jails, in hospitals, in institutions, and with prayer groups. Nothing has worked.

In the middle of a business trip to Akron, Ohio, Bill is in despair over his failures. He gets the names of some local alcoholics, and just starts calling. After nearly a dozen failures, Bill makes the connection with Dr. Bob. Together, with mistake after mistake to their credit, they approach the model of group help that will become Alcoholics Anonymous. Throughout, Christopher Vettel shows the strengths and the weaknesses of Bill W.'s salesmanlike approach, while Paul Hansen's Dr. Bob steadies the course.

Throughout Bill W. and Dr. Bob, both men have told their long-suffering wives that the women simply cannot understand the unique pressures of alcoholism of the demon. In a bit of a turnaround, both wivesLois, played by Darrell Gamache Stone, and Anne, Mary Carol Reardonhave echoed one another as they tell their husbands that men can't understand the loneliness and the fear, the collateral damage, that their wives feel. As the two talk with Liesl Cruz, who plays the wife of an alcoholic meeting with Bill and Dr. Bob, they sow the seeds of what became the support group Al-Anon.

Bill W. and Dr. Bob covers a lot of ground with great economy in a neatly staged production directed by Randy White. Christopher Vettel does a masterful job of portraying Bill at his strongest and weakest. Paul Hansen is a sympathetic Dr. Bob, both a foil and an independent figure. Darrell Gamache Stone and Mary Carol Reardon make sense of the complex parts of women who've chosen to somehow embrace their far from deserving husbands.

Mike Price is magical in brief but varied appearances ranging from a fellow drunk to a thoughtful doctor. Liesl Cruz does her part well as characters that range from drunken floozy through waitress, critical wife and prudish prayer leader.

The Cardinal Stage Company's production of Bill W. and Dr. Bob at the Ivy Tech John Waldron Arts Center is an involving and thought-provoking pieces of theatre. Performances continue through February 19.