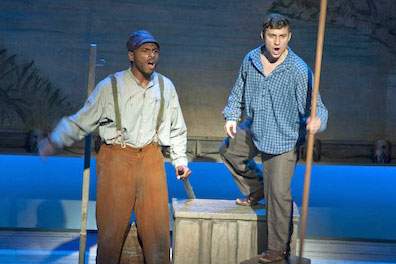 The fast moving musical directed by Randy White moves rapidly from scene to scene on Mark Fredrick Smith's raked stage. Genteel dining rooms, disheveled shacks, river camps, a funeral parlor and a river raft that seems to literally be careening and drifting down the river are all very much a part of the drama.

Seth Bazacas was the ever engaging Huck as he sang, danced and acted the character through his gradual coming to sensitive awareness. Franklin Grace handled the difficult but sympathetic role of Jim the runaway slave with grace as well. They are both strong singers and in their duets managed to both blend and keep their voices quite separate.

Javier Picayo as Tom Sawyer, the leader among the boys, was charming in his song asking for a "Hand for the Hog," and managed to preserve some of that charm as his twisted delight in adventure led him to conceal the fact of Jim's freedom.

Mike Price and Gerard Pauwels played the scalliwag Duke and Dauphine to linguistic and athletic perfection. The Duke's mangling of Shakespeare during the production of "The Royal Nonesuch" was nearly worth the price of the evening's admission.

The slave and later gospel chorus sang movingly with Kiotta Marshall's solo as a real vocal highlight of the evening. I also especially enjoyed the close trio of Liza Wallace, Cassie Alexander and Laura Schneider.

Music director Dan Lodge-Rigal led a scrappy, thoughtfully and richly varied mini orchestra. It was sort of a country string band with the welcome addition of trombonist Miro Sobrer.

Choreographer Diane Buzzell has put together some very challenging, energetic and colorful scenes that showcased the athleticism and the character of the players.

Costumer Alexandra Morphet displayed a full range of effects from high comic 19th century male and female fashion to rags and even to tar and feathers.

The Cardinal Stage Company's very enjoyable production of Big River at the Buskirk-Chumley Theatre plays through May 20.