BHRG To Compete Against Derby Powerhouses 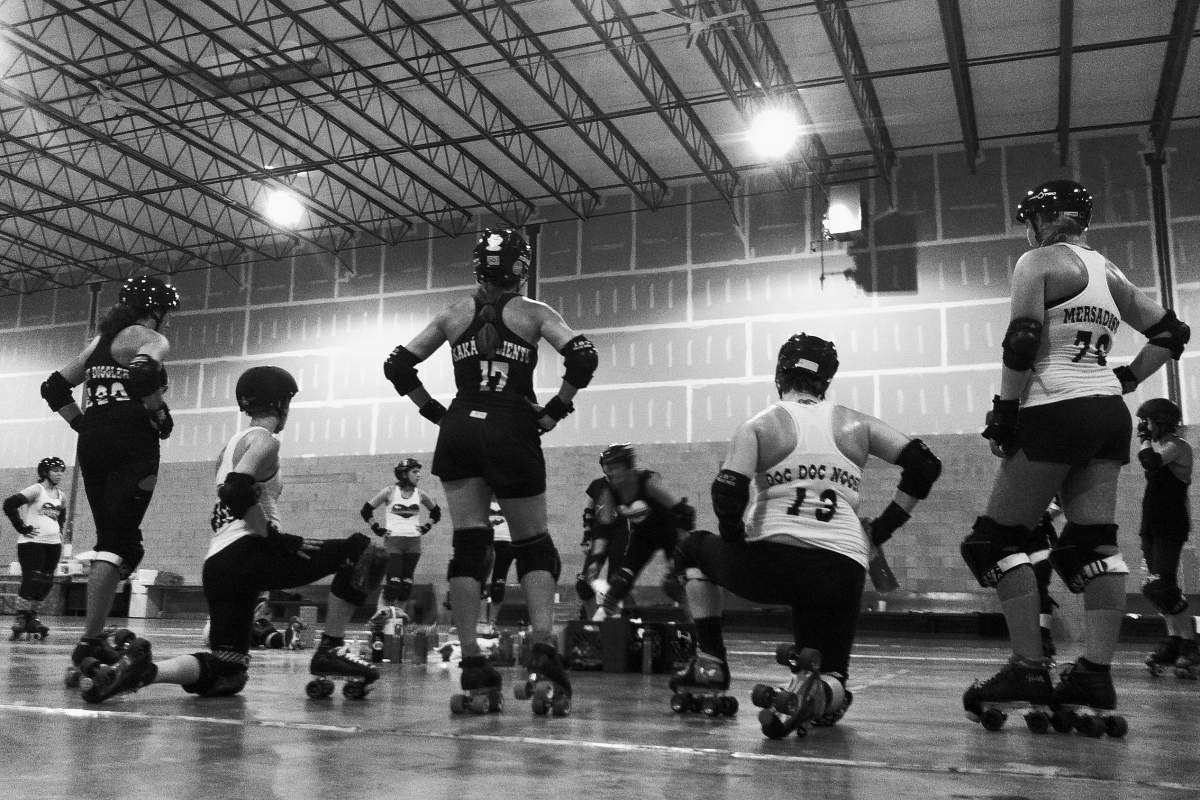 Back To The Grind

You'd drive right past Cardiac Arena if you didn't know it was there. It's the last warehouse unit in the strip on Curry Pike and the only one with dozens of cars parked by it.

Inside, everyone is wearing black or white Bleeding Heartland Rollergirl (BHRG) jerseys with their derby nicknames on the back. I'm not on eye level with anyone, thanks to the several inches of height their skates add. Three skaters kindly slow their roll so I can keep up:Â Pele's Melee,Â Doc Doc Noose andÂ Bobbi McGuillotine.

This is their first practice back after having taken a break during the month of July. They have four weeks until playoffs.

"We say we took a month off, but it was just off of scheduled practices," says Doc Doc Noose. "We've been doing crossfit and ballet and all these other things just trying to kind of make us more well-rounded athletes."

"You gotta have balance!"

Skaters' ballet skills will be tested in the first drill of the day. Shock 'N Roll places cones around the track so skaters can practice their plie rolls.

"You'll often see jammers pull this move off to get their last point," she says. "They'll be slipping through that narrow space by making themselves essentially half as wide instead of skating forward."

Bleeding Heartland skaters are preparing to compete in theÂ Women's Flat Track Derby Association (WFTDA)Â playoffs this year their first time making it to the international championships. They finished the regular season ranked 35th in the world the top 40 teams were included in the Division 1 playoffs.

"This is a huge deal," says Pele's Melee, one of the captains.Â "I've been describing it as sort of the culmination of my derby career. This is everything we've been working for for six, seven years."

I've been describing it as sort of the culmination of my derby career. This is everything we've been working for for six, seven years.

Derby By The Numbers

Bloomington is the smallest city represented at the championships. In true David versus Goliath fashion, BHRG will be joined in the Fort Wayne bracket by teams from Denver, Montreal, London and St. Louis.

"We are probably one of the most successful teams for our population base in the sport. We're very proud of that," saysÂ Boy Casey, head bench coach for theÂ Code Blue Assassins, BHRG's B team.

He explains that prior to this season, rankings were determined by a vote, which put lesser known teams at a disadvantage. This season, roller derby's governing body, WFTDA, unveiled a new ranking system that uses an algorhyme that takes into account the team'sÂ current ranking, the ranking of the opponent and the ratio of the final score. "So, the strength of win is far more important than just getting the W," he adds.

This new system worked in BHRG's favor in a bout against one of the teams they could face at playoffs Arch Rival from St. Louis. When the two teams met on May 11, Arch Rival was ranked 13th and BHRG was ranked 41st.Â Arch Rival pulled out the victory 251-189, but despite the loss, BHRG actually improved their ranking after that bout.

The skaters point to bouts like this as reason why they're confident they'll perform well at playoffs. But Bobbi McGuillotine says she still feels the weight of the moment.

"I've done this thing where I count down the days and then contemplate getting sick. There is so much pressure to bring home a win," she says.

A total of 8 or 9 skaters will be retiring after playoffs, including Pele's Melee, who has been with the team almost since its inception.Â Bobbi McGuillotine finished her history degree at Indiana University this year and will be moving to Guatemala to volunteer for the Peace Corps. Will she be bringing her skates with her? Absolutely.

"We'll see how that works on the volcanoes and mountains, but it's worth a try!"