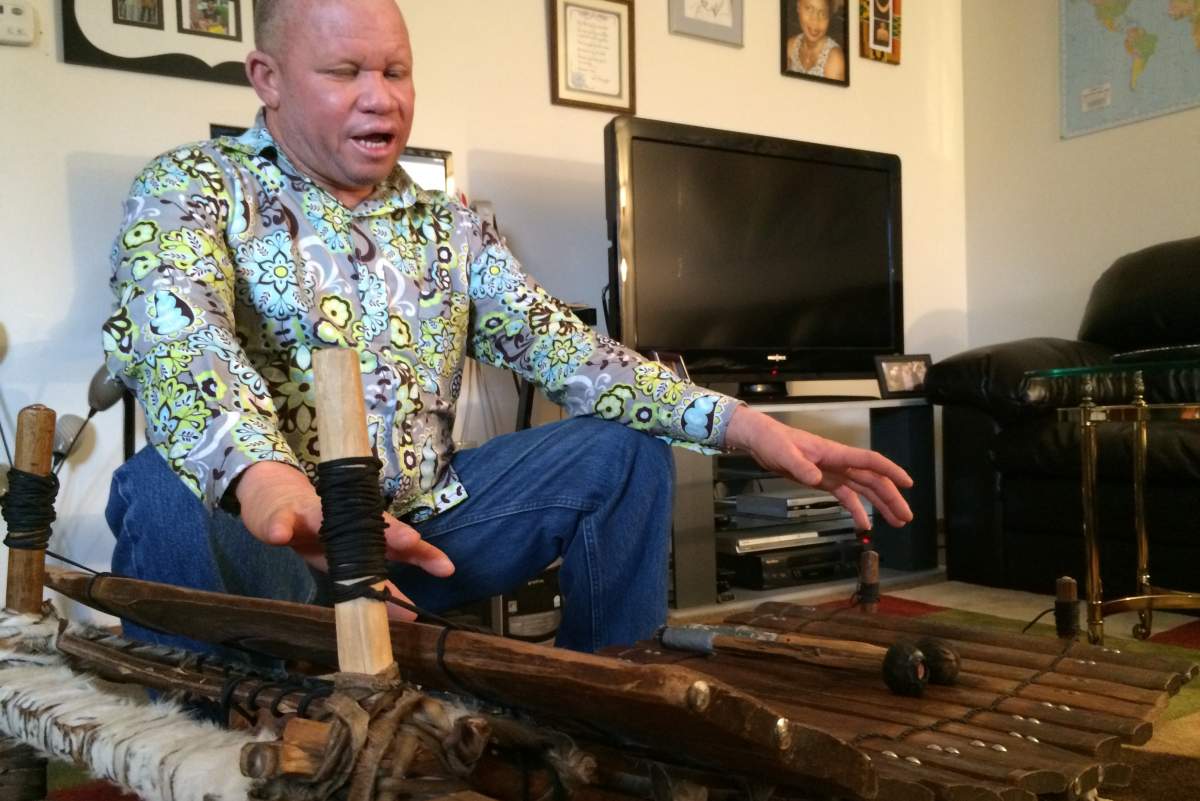 Monday, December 1st marked the annual observance of World AIDS Day. We've heard so much about another epidemic in Africa this year, the Ebola epidemic, that it can be easy to forget about HIV and AIDS, an epidemic that affects nearly 5% of the population in Sub-Saharan Africa, and which killed 1.2 million people in Africa in 2011.

This Thursday, the Columbus, Indiana group Arts for AIDS is organizing an awareness event called "Songs and Stories of Life" featuring storytelling, dance, and the music of Bloomington resident Bernard Woma.

The Gyil: A Musical Destiny

In Africa, it's a call to duty if you are a musician to use your musical skills to help communities. - Bernard Woma

Woma is a professional performer of the gyil, an ancient, traditional mallet instrument from the Dagara people of his native Ghana. And as he describes it, it's an instrument he was born to play.

"I was born with my thumb in between my forefinger and my middle finger," Woma said. "And that's the traditional grip of playing the instrument. You put the mallet in between your first finger and your middle finger, and you grab it with your thumb. It was a sign in traditional mythology or belief that when a child is born this way, they have a musical destiny."

The gyil is the grandfather to the western mallet instruments, including the xylophone and marimba. Woma's handmade gyil, originally owned by his grandfather, is made of 14 rosewood keys, amplified by hollowed out gourds that lie underneath the keys.

The gyil has a very distinct buzzing sound, which comes from holes drilled into the gourds covered with spider egg sacs. On more than one occasion, an egg sac on Woma's gyil has broken, and the correct kind of spiders is impossible to find in the U.S. When this has happened, Woma used a creative alternative: a white FedEx envelope and Elmer's Glue.

Prior to his studies, he served as the music director of the national dance company of Ghana, and has performed for President Bill Clinton, Queen Elizabeth, and Nelson Mandela.

This year, he's one of the performers at "Songs and Stories of Life," the event organized by the group Arts for AIDS in Columbus. The event will help raise awareness of the AIDS epidemic through Bernard's music, as well as performances by the Saakumu Dance Troupe. In addition, members of the Columbus community will read true stories written by people who have dealt with the AIDS crisis.

Woma's musical destiny, and his commitment to community engagement, makes him the perfect cultural ambassador for this kind of outreach event.

"In Africa," he says, "it's a call to duty if you are a musician to use your musical skills to help communities, to perform social ceremonies. You have a respectable position in society."

Arts for AIDS is an organization comprised of people from Columbus, Indiana who have all had personal experience working with AIDS relief groups in Africa and Haiti, including the Baobab Home Orphanage in Tanzania, The Granny Connection in Zambia, the Imani Workshops in Kenya, the Matthew Rusike Children's Home in Zimbabwe, and Konbit Lasante Pou Limonad in Haiti.

This event is their third outreach event of this kind. Proceeds from the event will go towards helping these groups in Africa and Haiti.

As Judith Gillespie, a member of the planning committee puts it, the organization initially stemmed from a realization of how few people in Columbus seemed to be aware of the magnitude of the AIDS epidemic.

"I was surprised at how little conversation or knowledge about AIDS or people who have AIDS was present in this society in Columbus," Gillespie said. "And that seemed important to try to help correct that some, so that people are aware that it's still an affliction in this country and all over the world."

Gillespie and her fellow organizers at Arts for AIDS are committed to helping people learn about the plight of AIDS victims in Africa and Haiti. Three years ago, when planning their first Arts for AIDS event, they decided art was the best medium to help raise that awareness.

Bernard Woma has that same shared vision about his own art.

"My work seems to be tied to the goal of community engagement," he says, "and also using music as a medium to create social awareness of the issues that border us every day. And part of it is AIDS, poverty, and diseases around the world. How can we rally people together to create some awareness of some problems in our world? And by knowing what is going on, they are moved to help."

On Thursday in Columbus, Woma and his gyil will be part of that effort to help.