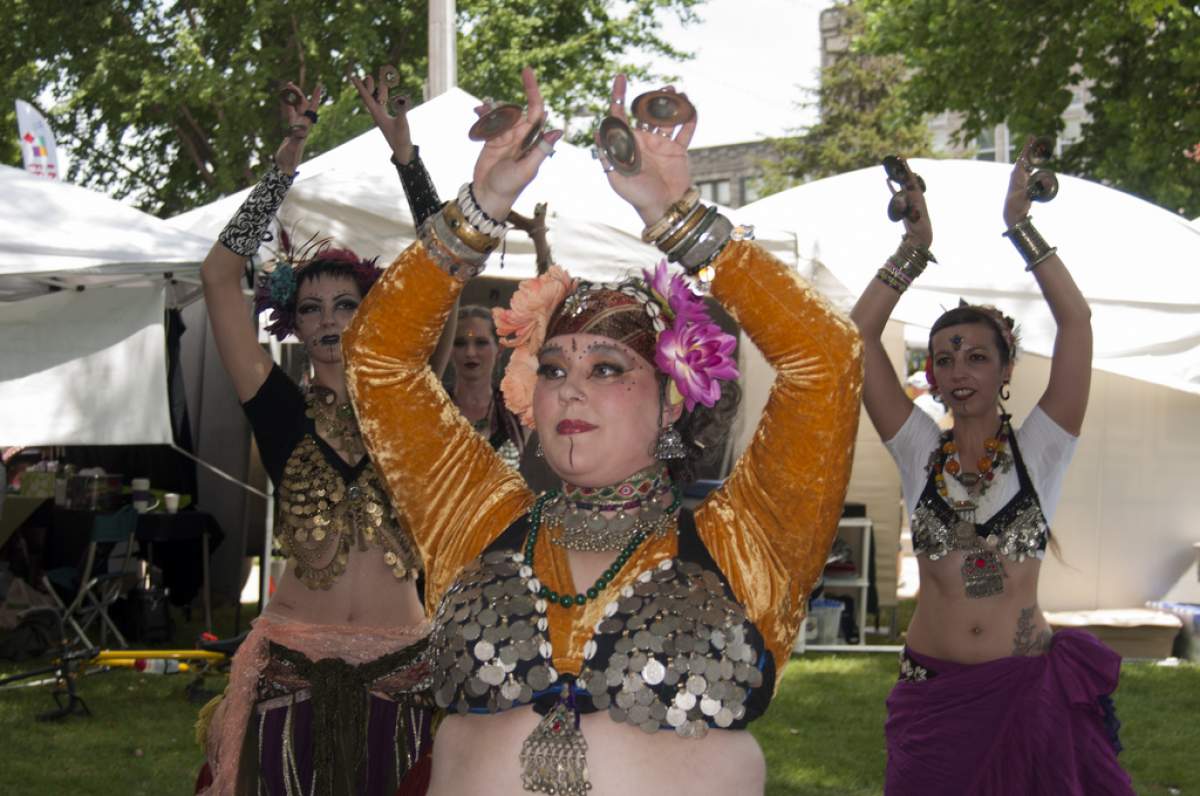 Rock 'N' Roll In The Hips

Music by the pop band Maroon 5 isn't the sort of thing one would typically associate with belly dancing, but that's part of what Different Drummer Belly Dancers is all about finding common ground with their audience members.

"We did our first dance to some rock n' roll and we got a huge response," says founder and director Margaret Lion. "We're dancing for a western crowd to music they know. When you shake your booty to Elvis people get it!"

While their choice of music may be a defining characteristic of Different Drummer, for Dark Side Tribal, the music is secondary to the movements. They dance American Tribal Style, which is a modern form of belly dance that emphasizes improvisation.

Despite their differing styles, the two troupes share one thing in common a love of costuming.

Teri Herron, who performed a solo dance to Maroon 5 at Bloomington's Arts Fair on the Square, says her look is inspired by everything from Spanish flamenco to Northern Egyptian belly dance. "We're borrowing from everybody, and we make a look that's comfortable and beautiful that makes us feel good."

But beauty does not necessarily equal comfort.

Sara Akemon of Dark Side Tribal says her outfit from that very hot summer afternoon at the Arts Fair consisted of two skirts, scarves, harem pants, tassels, a coin bra and a large flowered head piece.

"It weighed seven pounds, everything altogether," she adds.

That's in addition to all the noise-making elements of the outfits: bracelets with bells, tassels with cowrie shells and fingers cymbals called zils.

The dancers make a lot of noise with all their accoutrements, but no words are actually exchanged. According to Virginia Hojes, a certified instructor of American Tribal Style, the leader communicates with hand or head gestures to let the other dancers know what move comes next. As the dancers become more experienced, the cues become more subtle. "Things like eye contact can be one of the cues," she says. "It's like learning a language."

"It's choreography on the fly, so you're always making up what comes next," says Scott Matthew Myers, co-owner Panache Dance Studio and the only male student in the intermediate belly dance class. "It's like a chess game. You're always planning out moves ahead."

She explains that all belly dance uses these terms, but American Tribal Style "stylizes them so that if you go to Australia and you say I'd like to do a barrel turn, they'll do the same barrel turn that you learned in Indiana, Michigan, California or New York."