Belle and the Prince... aka Beauty and the Beast 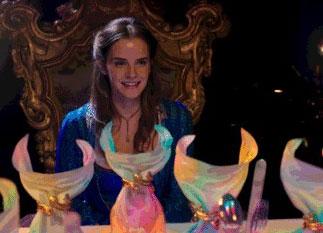 And now, which mask to choose?

The Cardinal Stage Company's holiday gift is a production of Disney's Beauty and the Beast The Broadway Musical. Musically, vocally, dramatically it is stunning from every angle.

I'm George Walker and yes, that is my voice narrating the opening of the picture book on the Buskirk- Chumley's screen.

The story is a rich and often a thought provoking one with some dark moments. If, the beast had shown kindness to the old woman, he'd not become a misanthropic outcast. If, Belle, were not a bookish outsider she might not have been such an attraction for the boastful Gaston. If her father Maurice were not a scatter brained inventor who lost himself in the woods…and so forth

Kayla Marie Eilers was a sunny Belle showing a bit of that "cock-eyed optimism" that we saw in her Nellie Forbush in IU's South Pacific. Mike McGregor was her warmly addled father Maurice. Connor Bernard, recently on stage over at the Bloomington Playwrights Project was a wonderfully braggadocios Gaston with Cole Weston as his much abused comic side kick, Le Fou.

Nicolas Colon was a dramatic figure as the frightening and sympathetic Beast. Philip Christensen presided over his household as a nervous clock with Scott Van Wye as the glowing candelabra, Janie Gordan as the warm teapot with Coen Berin as her son, Chip Amanda Biggs as the glamorous wardrobe, and Lisa Pudulka as the kittenish Babbette.

Saturday night's audience applauded individual songs and gave the cast a well-deserved standing ovation. The actors are such a show of the riches of our region. There are two who've played Riff in West Side Story-- decades apart--, a mother and daughter link hands in a dance, another mother and her son clink tankards in a tavern. The IU Musical Arts program is an important source of trained talent. Twelve area public schools and home schooling were part of the mix as well.

Kate Galvin directs with choreography by Dann Dunn and fight direction by Leraldo Anzaldua. Hana J. Cai conducts. Johna Sewell designed Belle and the Beast's costumes. The wonderful sets that everyone will be talking about are by C. David Higgins. Keith Truax and Maxwell Lagonia designed the lighting with sound design by Doug Borntrager.

The Cardinal Stage Company's production of Disney's Beauty and the Beast, The Broadway Musical at the Buskirk-Chumley Theatre plays through December 30