Beauty in the Macabre, “Visualizing Disease” at Lilly

By Mark Chilla and Colleen Leahy 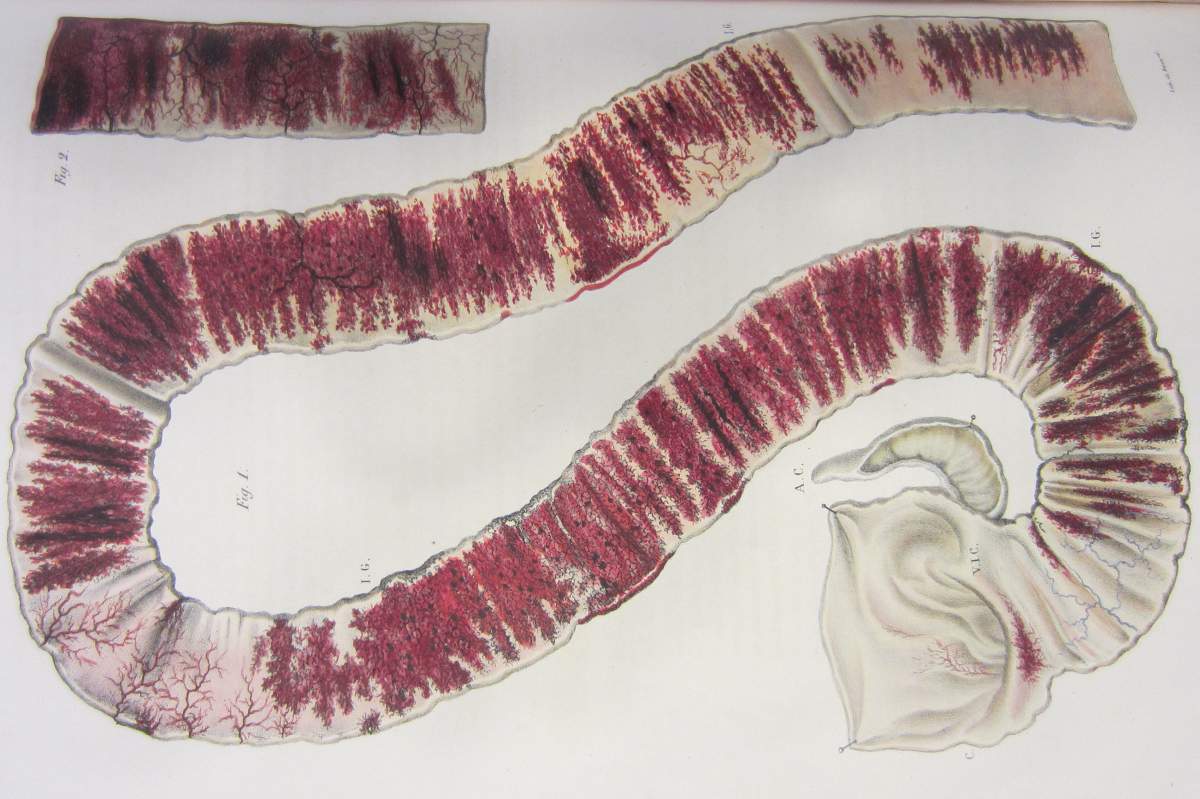 Graphic illustrations of tumors, skin lesions, and bone disorders might seem like something out of a horror film. But the Visualizing Disease exhibit, on display at the Indiana University Lilly Library on Bloomington's campus through December 20th, highlights the beauty, craft, history, and humanity of such depictions of illness.

The exhibition covers a vast range of pathological illustrations from medical texts in the Lilly Library collection. The images range from 16th-century black-and-white images of the most rare diseases and deformities, to the richly colored images of the 19th century that were used by medical professionals in their day to assist with diagnosing illnesses.

These pictures and these illustrations in these books are beautiful. They're absolutely gorgeously rendered. They're artistic masterpieces

"[There's an illustration of] chickenpox with the skin pustules, with the different colors, and the way in which the three-dimensionality is rendered," says Domenico Bertoloni Meli, a professor in the History and Philosophy of Science at Indiana University and exhibit curator, "it's very, very striking and to some extent disturbing."

These illustrations were used for medical purposes in their day, but even still, Bertoloni Meli says that "they were also seen as artistically striking objects of their time." Likewise, these illustrations remain relevant in the medical world. According to Bertoloni Meli, "several medical friends...have pointed out [that] these images allow one today to see things that one no longer sees in autopsies of patients, because the therapies adopted are very different and much more effective than those used at the time."

The multi-disciplinary interest in these illustrations today mirrors the process of making these images, which occurred centuries ago. Each image was carefully and beautifully rendered, usually with a team of artists and medical professionals. Bertoloni Meli explains the process: "There were several people involved. There was the surgeon or physician, the draftsman or watercolorist, and then there was the engraver. It was necessary to have very close cooperation among all the people involved."

The exhibit also features three contemporary pieces of art based on some of these historical prints by Betsy Stirratt, a local artist and the director of the Grunwald Gallery, taken from her "La Maladie" series. Her pieces-"Growth," "Elegance," and "Youth"-are reproductions of historical depictions of facial tumors and skin lesions, and highlight the humanity behind these terrible deformities.

She created these three works nearly twenty years ago after examining some of the images in the medical texts housed in the Lilly Library. "It made me curious about how we depict health, how we depict illness, why are pictures of disease so hard for us to cope with," she says. "These pictures and these illustrations in these books are beautiful. They're absolutely gorgeously rendered. They're artistic masterpieces, and the idea of depicting something so horrifying and disgusting in such a beautiful way was an intriguing concept for me."

Her work reflects some of the changing artistic depictions of the body in the last thirty years. Stirratt says that at the time she was creating her works, "there was a lot of interest in the body, the human body, depicting the body in contemporary art. There were a lot of well-known artists who really began at that time making objects and paintings and all kinds of things related to the body in a way that had never been approached before. So they were dealing with abjectness, they were dealing with difficulties with the body. It wasn't just about making beautiful things. It was about showing the reality of our corporeal existence."

The entire exhibition, including all of the images collected by Bertoloni Meli and Stirrat's paintings, is on display thanks to New Frontiers Grant from the IU Office of the Vice-President for Research. Each medical text is part of Lilly's rare book collection, which includes new medical texts from the Bushong-Beasley Dermatology collection.