A Beautiful Place To Paint 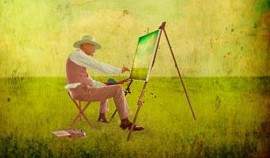 Where there's beauty, the artists are bound to show up. Brown County, Indiana has been a haven for landscape painters since the late 19th century, but took off as an art colony after 1907, when the renowned portrait artist T.C. Steele first carried his easel and paint box into the sunlit forests and got to work painting in the open air â€“ what the French call plein-air.

Steele and others of the burgeoning Hoosier School painted in the Impressionist style, a fluid rendering of real places and objects that emphasizes the play of light and shadow.

For the past 40 years, Indiana Heritage Arts (IHA) has promoted the tradition of this painting style as it was practiced by T.C. Steele and others in Brown County. Their growing permanent collection is displayed at the Brown County Art Gallery and at the West Baden Hotel in French Lick. Most importantly, they promote and support plein-air painters in Indiana with an annual exhibition and sale that draws collectors from around the country.

In 2017, the IHA was flooded with nearly 350 entries. A sweltering Sunday in early June is Take-In Day. It's a busy, buzzing morning at the Brown County Art Gallery, because those artists are bringing in the paintings themselves, rather than submitting digital images for consideration. Pat Lloyd, Board President of Indiana Heritage Arts, explains.

"Because we're limited to Indiana people who are somehow related to Indiana most of our entrants are residents and it is possible for them to bring their paintings to us," she says. "Sometimes it's inconvenient, but it is possible. It just makes a world of difference."

All morning, the volunteer Board members of IHA carry framed paintings from pickup trucks and cars into the Gallery and carefully hang them all over the walls. The volunteers wear white gloves and move each picture like they're transporting a treasure.

"We love to see the physical object," says Letty Newkirk, a longtime Board Member and volunteer. Â "The judges have told us that they love to walk around and see the pictures in their frames â€“ to see the physicality of the picture, the thickness of the paint, the intaglio work, instead of looking through a digital machine at slides. By seeing this whole mass of paintings, the judge will understand this area and its artists."

Jim Ross, co-owner of Eckert & Ross Fine Art, a gallery in Indianapolis, is the Show Director. His decades of professional experience in the art world have helped him find nationally-known Impressionist painters and teachers to act as Judges for the IHA show.

By IHA policy, these show judges cannot have ties to Indiana and Brown County, so that Indiana painters are viewed with rigorous professionalism. In 2017 the judge was Lori Putnam, of Charlotte, Tennessee.Â Driving into Nashville, her first impressions of Brown County hit her squarely in her painter's eye.

Jim Ross tells why Putnam was the Board's choice to Judge in 2017. "Her work fits in with the best of what our artists are doing and what the past artists have done. Also, she is very active in judging other shows, jurying other shows, organizing national exhibits she was the vice president of the American Impressionist Society, which is a well-known, national group of traditional artists."

Impressionism is usually described as a modern form of European painting, but Ross places it in the context of a longer history that makes it traditional.

"Traditional art in general is, I think, realism. It started in the Renaissance era of wanting to put a window on the world," he explains. "It can range from photo realism, to Impressionism, which can end up being pretty abstract."

Lori Putnam sees a strong connection between the tradition in the IHA mission and the people who do the work.

Everyone who works on this show strives to keep another tradition alive: friendship.

"It's like a giant family reunion," says Letty Newkirk. "We get to know these artists. We know their families. We know how they paint. Many of them actually come early in the day â€¦ and as soon as they have entered their art, they hop in their cars and pickup trucks, go out into Brown County and paint for the rest of the day. Many of these painters have full-time jobs, they're taking care of aged parents, they have children, they're busy like all of us, but they have this passion to paint, and to paint in or around Brown County, our out in rural areas where they live."

Once the paintings are all in and the artists have left, it's up to the judge to trim the massive load of pictures into an exhibition of 125 paintings. Last year, Lori Putnam did so in just six hours. The next day, she has to picks the prizewinners.

"I have to make sure I've turned my brain from if I like it or not, to if it should be in a show because those are two different things," Putnam emphasizes. "I'm not here to pick something because I like it. I'm here to pick things that are good for this show, and fit the mission of this organization." That can be a very physical process, when looking at real paintings instead of digital slides. "It's four hours of walking around in circles and changing my mind," even after having left the gallery. "There were a couple of pieces that in the middle of the night, I felt I was too tough on that. I was really, really too tough on that. Two pieces got pulled out this morning and got put back in the show. "

For the next five days after Take-In, the IHA Board prepares the Gallery for the show's gala opening party. Most of the submitting artists and their families are there â€“ but the excitement in the room that night is more than just friends greeting friends. It's collectors, art buyers, eager to see the newest work from serious artists painting in a style they love. Indiana State Senator Eric Koch was a Board Member and volunteer for IHA 25 years ago, and has stayed connected ever since, as a collector.

"You know, you're seeing here tonight, hanging on the walls, work by artists who were painting a quarter century ago, but also a whole group of new artists who are bursting onto the scene tonight," he enthuses, gesturing at the walls, which are packed with color. "And that's really what this show is about â€“ to showcase the best of the best."

The most important collector at the gala is the IHA itself. Out of every show, the Directors choose one entry for the IHA permanent collection on display at the Brown County Art Gallery. IHA Board Member Rick Kelly says, "We are at 16 paintings now in the permanent collection, so we're looking for museum quality pieces. A piece that would stand the test of time."

Eric Koch is was the emcee for the opening night's award presentations. He announced that the 2017 recipient of the Directors' Purchase Award was Fred Doloresco, for his large painting, "Snow-Vestured Story."

It's a Brown County scene. You're in the bend of a wintry, snow-piled road that curves from the foreground back to pass in front of the iconic Story Inn â€“ antique gas pump and all. It's an angle that travelers on State Road 135 will recognize instantly.

Fred Doloresco is a recently-retired cardiologist from Fort Wayne. With minimal training and maximum passion, he has crammed painting into his spare time for many years, showing and selling his work in the US and abroad. Â He keeps coming back to Brown County â€“ and it turns out there's more to this picture than just the picture. Doloresco revealed that the winter scene was actually born from a summertime painting session.

"I came down with Doug Runyon, who is also in the show, and he and I painted in the summer," he said. "And then I said to him, â€˜I'd love to paint this when there's some snow on the ground.' And he came down later and took a photo of the Story Inn with snow on the ground, and he says, â€˜There you go.' And so that was sort of the inspiration for the painting. We're a little luckier than the photographers, because we can actually make things up."

As the show's Judge, Lori Putnam had no problem with this. In fact, it's all a part of being a plein-air painter. Standing in the open, she says, a painter is being scientific â€“ an observer, noticing and recording the effects of light, shadow, and texture that make up the instant character of a place. Putnam adds that the studio is where the magic happens, where a final, finished painting is produced, often with the help of photographs and earlier studies of the same place in other seasons.

"It's not that what was there wasn't beautiful, but I think that we are called, as creative people, to make what is there more aesthetically engaging to the viewer," she says. "Sometimes that means just some simple editing. And sometimes it means total re-creation of a place."

She gave an example, from a day when she and another painter visited a rocky beach in Carmel, California, and she had the strong memory of one of his paintings. "I knew for sure, this is the spot where he painted this painting. And he pulled a catalog out of his car, that had a picture of that painting. And there was not a single shape of that rock in front of me, with the crashing waves, that matched, in the painting, to the actual rock. He'd made it more beautiful. And it was that exact spot. So he captured the place, without copying it. That's hard to do."

What finally comes across to experienced judges like Putnam is the painter's lived connection to a specific place.

"I think that that's what the awards come down to," she says, "when you can attach to that person that their work was from their heart and not just from their head. And those are the pieces that get awards."

Speaking of awards, Fred Doloresco's winter scene in Brown County pulled off a double win: First Prize, the IHA Gold Award. This was the first time one painting got both First Prize and was the Directors' choice to purchase for the permanent collection.