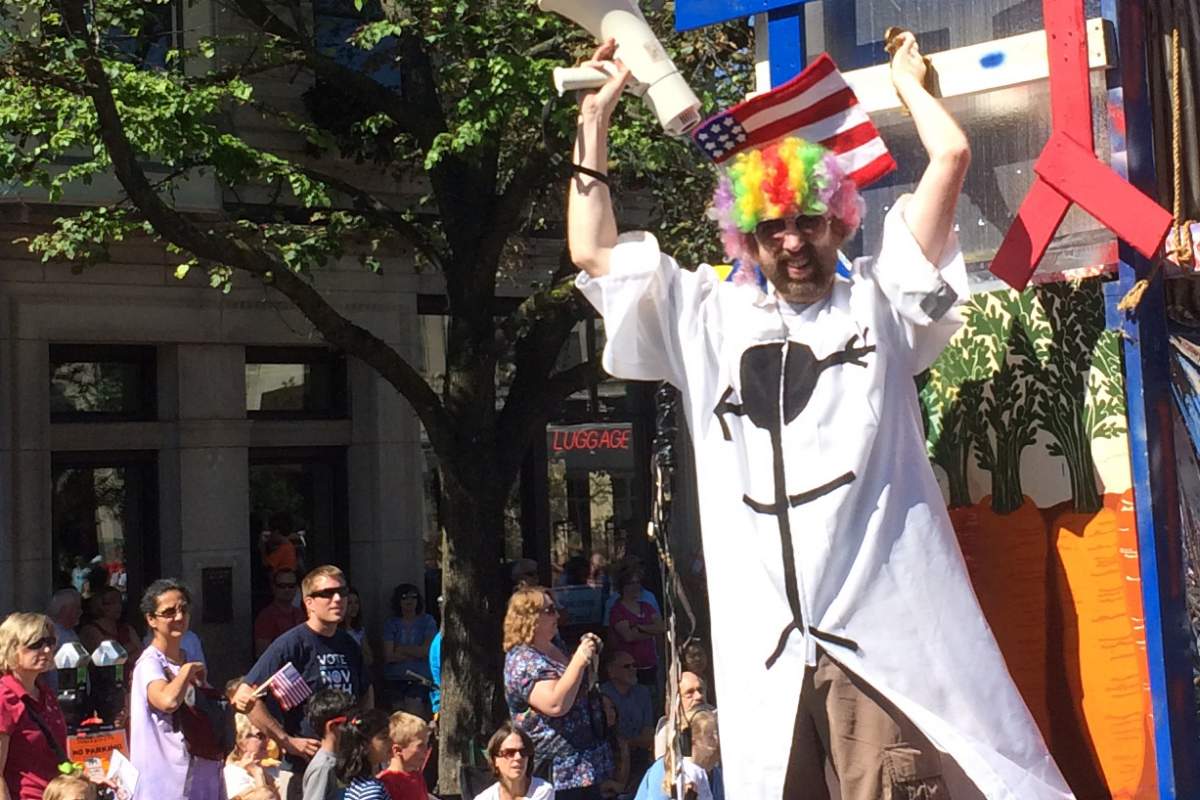 If you have been to the 4th of July parade in Bloomington even once in the past 20 years, there are a few things you have probably seen. You have probably seen politicians, diesel trucks, and a parade float from a group called Beanpole. Their float often stands out for its inventive, yet befuddling display. They have featured golden robots, horse masks, and a tether ball-playing Uncle Sam. One staple of the Beanpole showcase is a man shouting into a megaphone about pointlessness. That man is Andy Cambridge, the heart of Beanpole.

The first float that Beanpole created wasn't intended to be in the parade.

Cambridge explains, "We just literally built a float for no apparent reason." Cambridge pulled the float up and down the streets of his residential neighborhood. Chalk it up to pointlessness.

When the the 4th of July parade came around, Cambridge saw an opportunity to exhibit the float, and he entered it into the parade. The Beanpole float represented a playful eccentricity that Cambridge felt was missing from the parade.

"I specifically remember an older gentleman who would go down the road on a unicycle spinning a plate on a stick and bouncing a basketball," Cambridge says. Cambridge felt the parade was becoming more of a political event and one filled with advertisements. So for the last 19 years, he has brought his own brand of handmade, high-energy celebration.

Cambridge explains, "I love going down the street July 4th [in] whatever we've created, be it a giant brick chair or a giant tower...or a bunch of netting with weird stuff hung into it. That's patriotic because it's just expression. It's just fun."

When the first float got to the finish line, the wheels were gone. They had been worn off of the base, and it was an act of will and strength to get to the end of the parade.

Since the first parade, Beanpole has gone through many different floats and established a reputation for being a parade staple. This year's float was particularly tall and put together quickly at Cambridge's childhood home which he refers to as Beanpole National Headquarters.

"We put a lot of effort into it, and we don't do it to impress anyone. We do it because we want to create something, and then, we get to share it."

Cambridge lives in California now, but he makes the long trek back to Bloomington to participate in the parade each year. 2014 is his 19th parade.

Public response to Beanpole has ranged from celebratory to condemnatory, but after nearly two decades of appearances, the audience is expecting Beanpole. Cambridge pointed out that there is a whole generation that has not seen a 4th of July parade without Beanpole.

From the outset, Beanpole has pledged allegiance to "pointless behavior".  Although it's not one of the rights warranted by the Declaration of Independence, Beanpole's longtime juxtaposition with beauty queens, drum and bugle corps, and political candidates may have earned "pointless behavior" an honorary place in one of our founding documents.  At least in Bloomington.