Baskerville: The Probability Lies In That Direction, Holmes 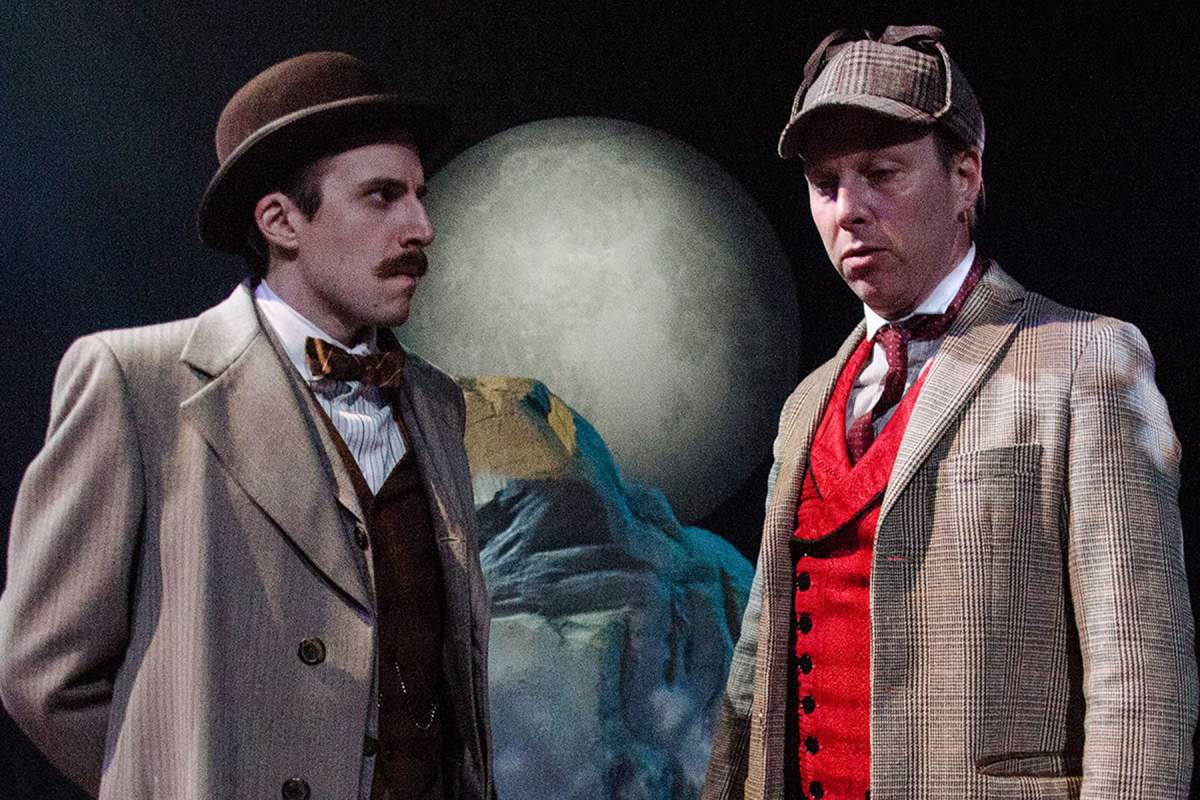 Sir Arthur Conan Doyle's the Hound of the Baskervilles is one of his most successful Sherlock Holmes mysteries. Critic Jacques Barzun called it "the only perfect story among the long ones…" With its focus on the solo efforts of Doctor Watson, its setting out of London on a haunted moor and the eerie presence of the hound itself, it's attracted the efforts of theatre, screen and television producers.

Baskerville is Ken Ludwig's send up of the Sherlock Holmes' classic. Ludwig has credentials as a skillful playwright. His comedies, Lend Me a Tenor and Moon over Buffalo have been successful laugh producers around the region.

The energetic Cardinal production directed by Randy White uses just five actors, many costumes, a multitude of props, with lots of nods and winks on the stage of the Ivy Tech John Waldron arts Center.

Baskerville begins like the original with Watson attempting to unravel the mystery of a walking stick left behind by a potential client. Holmes applauds his every effort and then explains why each of the doctor's conclusions is wrong…but in a nice way. This sets the stage for Watson to be sent on his own to Baskerville Hall.

With Brown picking up a couple of other minor roles, it's left to Bloomington's own Mike Price and frequent Cardinal guest Constance Macy to appear as three dozen other characters. Some are in the original story and some are added just for Baskerville. Price plays most of the men, but dons a skirt for a couple while Macy handles the women with a few excursions into trousers. I especially enjoyed Price as a wild butterfly catcher and a deaf hotel worker. Macy was quite funny as a servant with a rule that all w's are v's and all v's, f's, and she made a snazzy newsboy in short pants.

Playwright Ludwig is clearly in love with the original story and especially in the first act things ran a little long for the midafternoon performance. However things picked up well in the second act as the scenes came to a nicely comic and quite satisfying conclusion as most of the laughs were in place and the mystery unraveled neatly.

By the way, in case seeing Baskerville and rereading the original story isn't enough, you might look up the French author Pierre Bayard. Bayard's book Sherlock Holmes was Wrong… maintains that Holmes and Sir Arthur Conan Doyle both missed the real murderer. I shouldn't, but I'll tell you that he puts the blame on Beryl Stapleton, the sister of the man that Holmes names.

The Cardinal Stage Company's Baskerville continues through October 9th. Set designer Kevin Nelson is responsible for the many clever props. Johna Sewell and a lot of Velcro do a very successful job with the varied costumes. Mike Price's wildly creative sound design helps to keep the comedy coming.

P.S. This review was written in Baskerville Old Face, a classic font designed by the pioneering printer John Baskerville in the 1750s