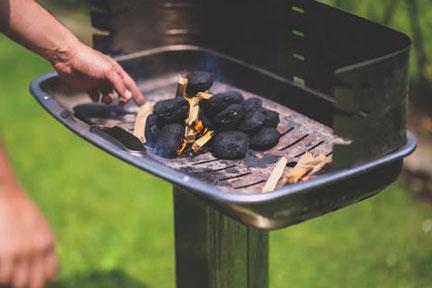 Someone is about to start cookin'!

I'm George Walker for WFIU Arts, I got a chance for an early look at Robert O'Hara's Barbecue

As the lights come up in the IU's Wells-Metz Theatre we see a simple city park. There's grass on the floor, lawn chairs, a picnic table, and a stand-up barbecue. The backdrop is a lovely projection of a park scene. Birds are singing.

A white family and a black family have each chosen this tranquil setting to stage an intervention. Both have a brother, James T., a bossy sister, Marie and a problem nicknamed Zippity-Boom! The white Christopher Plonka is the first to arrive and he's busy on the phone grousing about the plan and letting us know what's going on. Shortly the bossy Marie, Carolyn Stouder arrives to arrange a party scene and she's followed by her sisters Julia Klinestiver as Lillie Anne and Clark Conrad as Adlean. Adleans's kids are left in her car.

The lights go down and when they come up it's the black family getting things arranged with brother James T, Kenneth Arnold II. Their family also has a sister who's instigated the intervention, the bossy Marie, Sha Collier, and her somewhat reluctant sisters Lillie Anne, Takayla Carlton and Adlean, Adrienne Embry.

The scenes are richly comic in a good sense. Playwright O'Hara has a wonderful ear for dialect and argot and both are richly verbal with speech after speech from both families that I wished I could remember perfectly.

Barbecue is a hard play to describe without giving too much away. The language filled first act is roughly in the present. It ends in a scene that runs a little too long, but it ends with the show's quite amazing surprise and I can't tell you about it. The second act begins a bit deliberately a year ago, then it picks up to moves to six months ago and then finishes stylishly a year in the future.

I can tell you that the white Zippity-Boom Caroline Santiago Turner does go to rehab in Alaska and that she wrote a memoir that for drama, romanticized her own life and her family's. The black Zippity-Boom Shai Warfield-Cross did go to rehab and is a wealthy and internationally acclaimed singer and actress wannabe.

And then there's Tyler Wachsmann who's listed in the credits as "director." I can't tell you anything about him.

Jennie Fischer is the designer of the neat little park for Barbecue and the atmospheric projection. Elizabeth Grace Davis does a fine job of coming up with appropriate and contrasting costumes for the families and later, much more. Naomi S. Gold's lighting creates the sunshine in the park, the black outs between scenes and the drama of the finale. Kathryn de la Rosa supplied those bird calls that set the scene.

Robert O'Hara's comedy Barbecue is directed with nice attention to the varieties of the characters and the actors by Ansley Valentine. It's at the IU's Wells-Metz Theatre October 12,13 and 16-20.