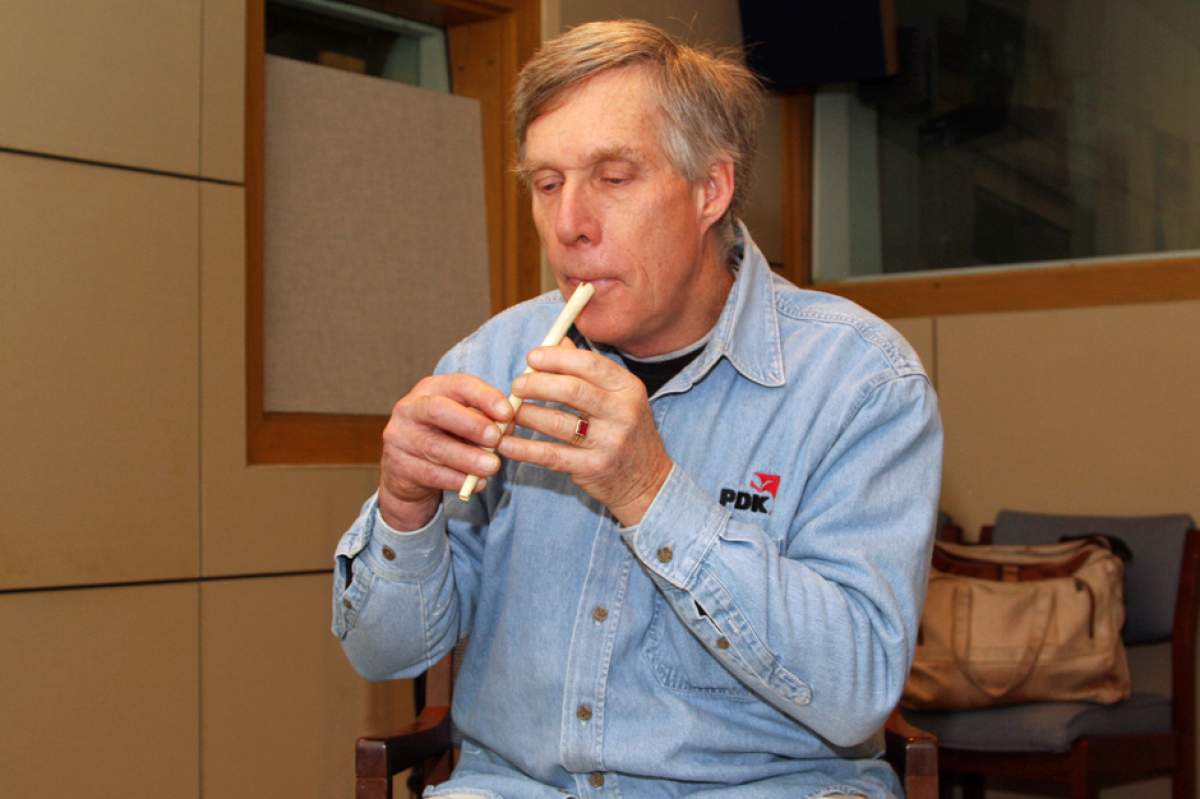 For the past forty years, audiences at Steve Pollitt's concerts have heard him perform on an array of primitive, international, and ancient woodwind instruments-the Japanese shakuhachi, the Hawaiian bamboo sax, the South Asian shruti, to name a few.

"Were it not for my son, who plays a lot of the same things I do," Pollitt says, "I would be the only hulusi player, bawu player, double ocarina player . . . anywhere in the Midwest. And certainly the only one in the United States that I know of playing anything remotely like what I play."

Schoolchildren who attended Pollitt's performances (some 700 solo concerts to date) nicknamed him "Bamboo Steve" because many of the woodwinds he plays are made of that substance.

Bamboo Steve recently began performing on a replica of a flute made not of bamboo, but bone. The flute is one of several found last year in a cave in Germany that are estimated to be about 42,000 years old, making them among the oldest musical instruments in existence.

The flute is helping Pollitt in his decades-long project to give little-known instruments more widespread exposure.

"It struck me, when I saw it, as the most extraordinary opportunity to reach and try and touch [an ancient] people who are not wholly lost to us, but who are so distant."

"It's quite small," Pollitt says, holding the flute, which is reproduced in bone-colored plastic.

The instrument is an end-blown embouchure flute like the Andean quena and the Chinese xiao. Less than eight inches long and barely a half-inch wide, the flute has four finger holes. The original was believed to have been made of the primary shoulder wing bone of a large bird, possibly a swan.

Pollitt demonstrated the flute in the WFIU studios. Closing his eyes as he played, he improvised a haunting melody. The flute gave a thin sound and mostly stayed on pitch.

It's a challenge for him to play because it's so small. "It's a hit or miss operation."

Pollitt got the flute through a friend who bought it from a museum gift shop in the region of the Swabian Jura plateau, where the bone flutes were found. The region is home to a large number of prehistoric caves and rock shelters that have attracted Paleo-anthropologists since the beginning of the 20th century.

Scientists have found other, more sophisticated instruments in the region as well.

"The most elaborate of them is not only a flute," says Pollitt, "it was like a court or royal family instrument. There's one they found that was a split piece of mammoth ivory. [It was an] enormously complex instrument for a Stone Age craftsman to make."

The ancient flute plays in the key of C minor and is set up on what Pollitt calls "the Chinese system."

He adds, "Fingerholes were difficult for these craftspeople in these bone instruments."

Prehistoric caves have yielded evidence of another way Stone Age people created music: by striking stones with a hammer-like object.

"We know that in the caves people played [music] all the time," says Pollitt, "because there are sounding stones in these caves-stalagmites and stalactites that ring. All of the ones that do ring are covered with hammer blows. The bits of hammer that have been left are dated to same period."

The flute recently had what Pollitt called "its first coming-out party" at a concert he gave at the Monroe County History Center, which was also broadcast on the community radio station WFHB. He judges the flute's first public appearance a success.

"People loved the idea that I can play this 42,000-year-old old thing, and it's just music. There's nothing weird or distant about it-it's just human music. . . . Â That's always delightful for us-it reinforces our sense of humanity, of mutual brotherhood."

On March 6 from 4 to 5 p.m., Pollitt will perform on the bone flute and other instruments at the Emeriti House in Bloomington.