Make Me Bad: Grand Guignol As A Musical 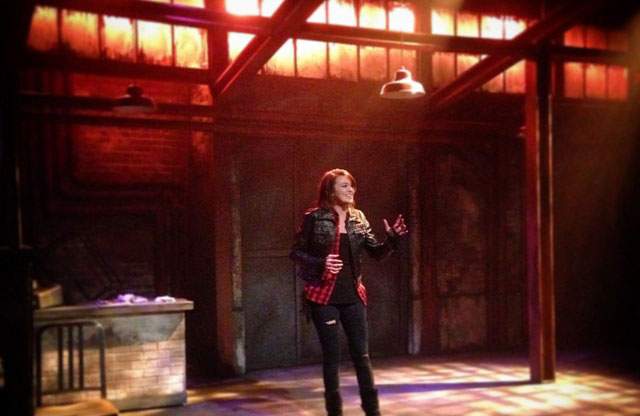 In Make Me Bad at the Bloomington Playwrights Project the creators, Drew Gasparini and Alex Brightman set out to write a dark convoluted story of murder, and dark and convoluted it is. Make Me Bad is this year's BPP/ Indiana University Department of Theatre, Drama and Contemporary's Dance's collaborative musical, but don't expect any light hearted touches. There are plenty of chilling moments, and not a hint of a laugh in the whole tense non-stop ninety minutes.

The show opens with Markus McClain as the charming Max conducting a ritual murder of a couple of young business interns in an annex of designer Chris Rhoton's wonderfully detailed abattoir of a warehouse's loading area. Next we meet the much abused and beaten down Daisy, Maddie Shea Baldwin. She's an abused failure as a bookstore clerk and even more abused failure as a waitress. Max is attracted to her and the names of people who've abused Daisy begin to be added to the town's homicide statistics.

In flashbacks to the past of Daisy's childhood we see Joelle Jackson as the much abused Daisy and her creatively vicious father Andrew Minkin, and in the present, Kelsey Shaw, quite wonderful, as the grown up Daisy's more subtle but equally abusive mother. We've already seen that murder is the solution to problems of abuse and even just bad manners in Make Me Bad, so we know dad and mom had better be on the lookout.

Joey Birchler and Robert Toms were the detectives frustratedly tracking Max and later Daisy through the twists of the plot. The writers have nicely supplied them with typical cop dialog and the usual worry that the big case will be taken over by the FBI.

Mary Beth Black kept us apprised of the homicide reports and the city's reaction as a TV news anchor.

Nicely creative use of the space and economical direction is by Chad Rabinovitz and David Sheehan. Musical direction is by Benjamin Aaron Smith. Saturday night's full house applauded appreciatively and is probably going to keep its collective mouth shut about the surprise final twist of the plot, at least if it knows what's good for it.

Make Me Bad, the BPP/IU Collaborative Musical plays through February 13.