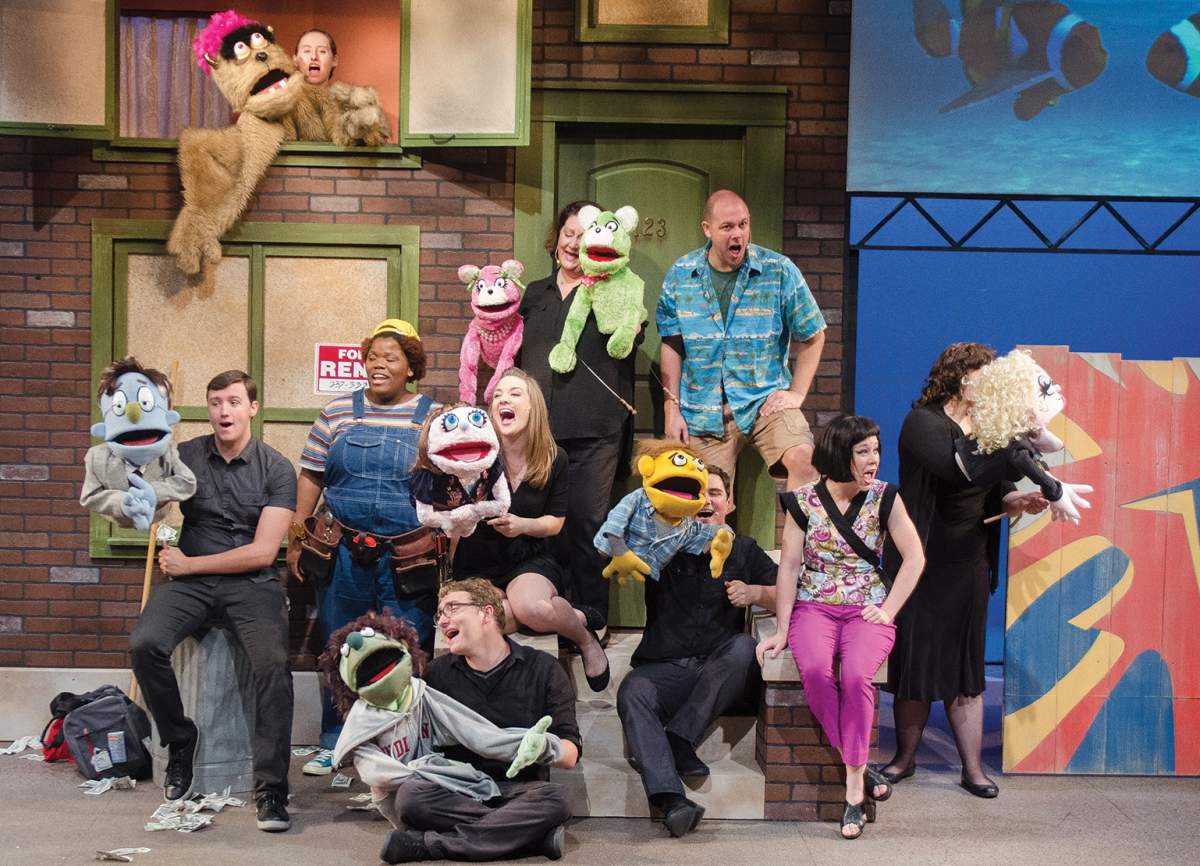 Avenue Q at Terre Haute's Crossroads Repertory Theatre is a musical that's been described as Sesame Street for grown ups. The show is more than ten years old, but it's still fresh enough for some jaw dropping and blush inducing moments along with plenty of laughs.

The ten member cast play multiple roles as they act, sing, dance and puppeteer. The production is directed by Bill Kincaid with help from choreographer Teresa McCullough and musical direction from Mark Carlisle. The puppets come from the original production.

Will Rupert is the fresh faced college grad, Princeton and the uptight, Rod. Andrew Behling is versatile as Rod's friend and later partner Nicky, and Trekkie Monster, a character loosely based on Cookie Monster. Rayanna Bibbs drew laughs as an apartment super' who seems to think that she's the late Gary Coleman. Drew Hampton is thoughtful as an aspiring comedian. Emily Wirkus is a bit of a firebrand as his comically Asian girl friend. Molly LeCaptain is the always sympathetic preschool teaching Kate Monster. Betsy Baer is simply a hoot, as Lucy the Slut.

Many of the songs focus on social issues. Rod and Nicky sing, "If You Were Gay," as a couple of characters that remind us of Bert and Ernie fence around being outed.  "Everyone's a Little Bit Racist," features the whole cast exploring their sore points and blind spots. Trekkie Monster's insistence that "The Internet is for Porn" in the face of the other characters high minded comments reminds us that social media does have many uses. "Shadenfreude" is one of the weaker songs, but sometimes we do take comfort from the distress of others. "The Money Song" got a special laugh from the Terre Haute audience as the homeless puppet wears a beaten up IU sweatshirt.

I saw Avenue Q in its original production more than ten years ago. It's aged well. It's a very funny, insightful and even occasionally moving show. What I saw at Crossroads is the equal and in some spots better than what I saw in New York. My seats were a lot closer and I don't need to mention the difference in ticket prices.