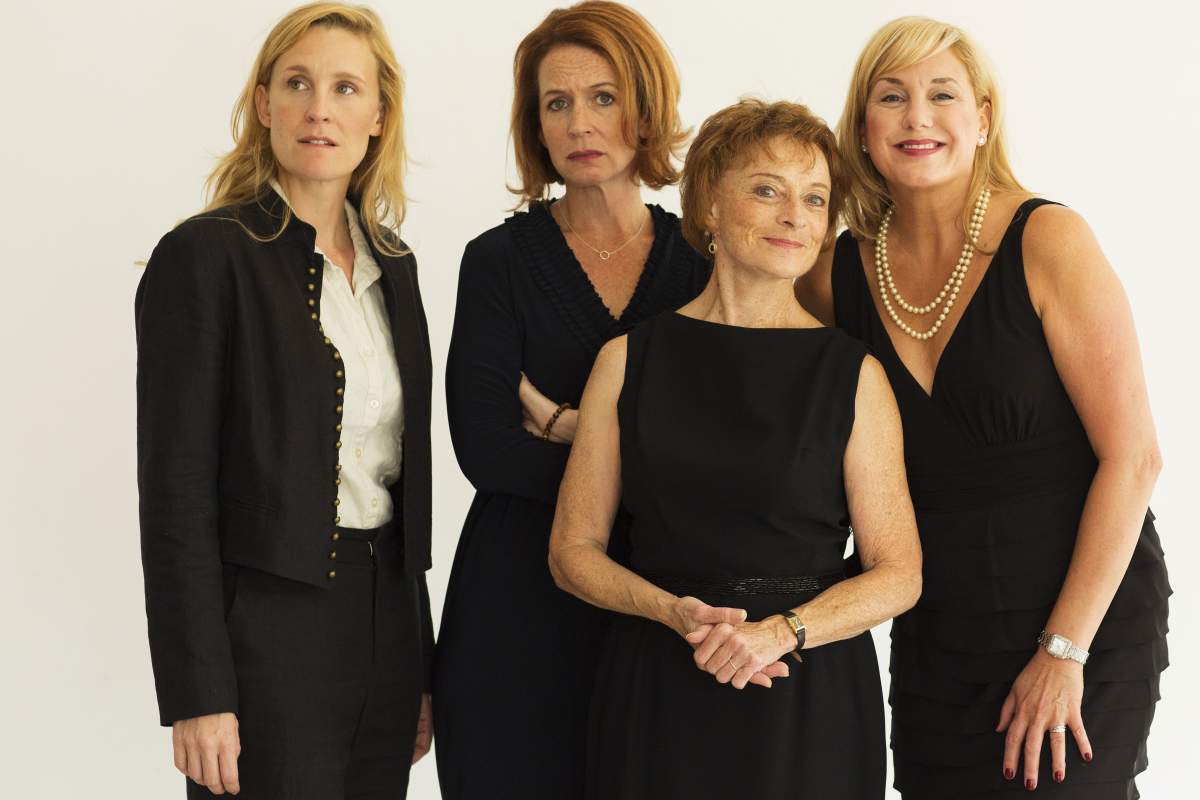 It's hot outside in Oklahoma's Osage County in August and it's even hotter inside the Weston Home in Tracy Letts Pulitzer Prize and Tony Award winning drama.  August, Osage County is a frequently comic dark drama about fractured families.

The family patriarch is Beverly Weston, a poet who had an award winning book forty years ago and hasn't written anything of substance since. Jack O'Hara was a thoughtfully garrulous Beverly in the lengthy opening monologue. He confesses to escaping into drink while noting that his wife Violet has chosen a variety of addictive pain killers.

During his talk, Diane Dorsey as Violet wanders down the stairs in confusion and then returns to bed. Dorsey's Violet can be an acid tongues critic, a pathetic figure and even a charmer. Dorsey was magnetic as this rapidly changing complicated figure.

Beverly goes missing and the family's daughters with their stories assemble. Constance Macy, Barbara comes in from Colorado. She's the oldest daughter, the deepest daughter, and the one with the most issues with her mother. Barbara brings her own troubled family. Her husband Bill, a thoughtful Mike Price, has left her for a young grad student. Her daughter Jean, IU sophomore Mia Fitzgibbon, is into smoking pot and teen aged angst.

Middle daughter Karen, Cindy Phillips, flies in from Florida. She's the beautiful Weston daughter. As author Letts writes and Phillips plays, Karen is a masterpiece of self -involvement. Totally oblivious to everything around her, she delivers a monologue about her life romance, upcoming wedding and honeymoon plans. Daniel Clymer played her intended.  When just what a Miami sleeze he is comes out, Karen shows a bit of the Family grit, by deciding to ignore his faults and simply play the hand she's drawn.

Ivy Weston, Catharine Du Bois, comes from a nearby apartment. She's the youngest daughter and the only one who hasn't fled from Osage County. She's the most knowledgeable about the situation. She knows just how their mother gets those multiple pain prescriptions. She knows how much their distant father drinks. Du Bois plays Ivy as a woman whose goal is to be on her own two feet, to separate her life from Violet and Beverly. A lot of family responsibility has fallen on Ivy's shoulders and she resents it.

Joining the sisters is their aunt and uncle,  Violet's sister the ebullient Mattie Fae, Catherine Vaughn Mobley and her easy going upholstery selling husband Charlie, Ed Mobly.  This is the first time these two veterans have played opposite one another. They're clearly relishing their parts and the opportunity.  Brandon Wentz was their sad sack son ‘Little Charlie.'

Anchoring a number of scenes into place was Sam Cusak as the sympathetic Sheriff Gilbeau.

Near the bottom of the extensive cast list for August, Osage County is IU sophomore and Bloomington North grad' Korinne Dunn who plays the thougtful local Indian girl, Johnna Monevata, that Beverly has hired to look after his wife.  She's the audience for Beverly's opening monologue and it's into her arms that Violet falls at the play's end.

August, Osage County is a roller coaster with emotional moments, carefully calculated build ups and sharp drops. In one scene there are three family quarrels going on in C. David Higgins wonderfully detailed sprawling set. There's one on the left, one in the center and one in the balcony. It's practically operatic.

The play is very dark. It's also very funny, but the humor can be hard to explain.  Frequently after a laugh I wondered ‘how could that have been funny?' For instance the line, "at fifty in New York, she could break a hip" drew laughs. I can't explain just why, but trust me. It was funny.